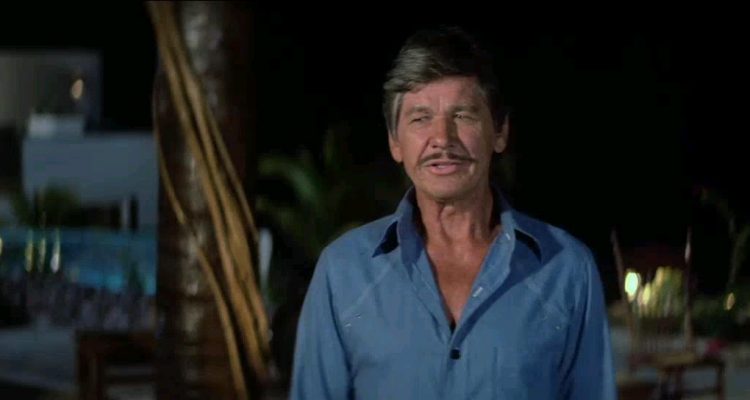 CaboBlanco is certainly worth the upgrade or for even casual purveyors of Bronson’s.

Plot: In 1948, an assortment of shady characters are searching for Nazi loot, sunken off the coast of Peru.

Review: A beautiful French woman named Marie Claire (Dominique Sanda) lands in CaboBlanco, a coastal town in Peru right at the tail end of World War II. The place is infested with intrigue, backstabbing, corruption, and dirty secrets. Marie Claire is looking for her lover, who was last seen on an expedition off the coast to find and excavate for a shipwreck with millions of dollars worth of treasure. She enlists the aid of a bored ex-pat American barfly named Cliff (Charles Bronson) to help her get some answers, and as he tries getting her closer to the truth, he runs into brick walls, thanks to a sleazy military dictator-type (played by Fernando Rey) who runs the town, as well as a washed-up Nazi named Gunther (Jason Robards) who’s been in hiding since the war ended. Cliff also comes to realize that his heart isn’t as cold as he thought it was, thanks to the overt advances of Marie Claire, but when he sees her intent to recover the treasure at all costs (truth about her lover be damned), the heat between them gets complicated and the sultriness of the plot gets thicker.

Heavily inspired by Michael Curtiz’s Casablanca, J. Lee Thompson’s Cabo Blanco feels more in tune to pulp novels the likes of which Clive Cussler wrote in the late ‘70s and early ‘80s like Raise the Titanic! than it does to any single film before it, and therein lies a major problem with the project. Light on action, heavy on indistinct dialogue and bland characters (including Bronson’s), and shockingly sleazy, the film pays homage to classic films, while upping the ante on the “R” rated factor, which upsets the way the film plays. It’s not a creative success, but it’s a curious endeavor, especially for fans of Bronson.

Kino Lorber has just released a nicely remastered for HD Blu-ray of CaboBlanco, and it’s the best the movie has ever looked. I’ve owned a crummy looking DVD of this film for ages, and so it’s nice to finally have an edition of the movie that can be watched and studied for ages to come. Kino’s release has three features on it that make it even more worthwhile: “The Making of CaboBlanco,” an interview with producer Lance Hool, and a running audio commentary by Bronson specialist Paul Talbot. It’s certainly worth the upgrade or for even casual purveyors of Bronson’s.