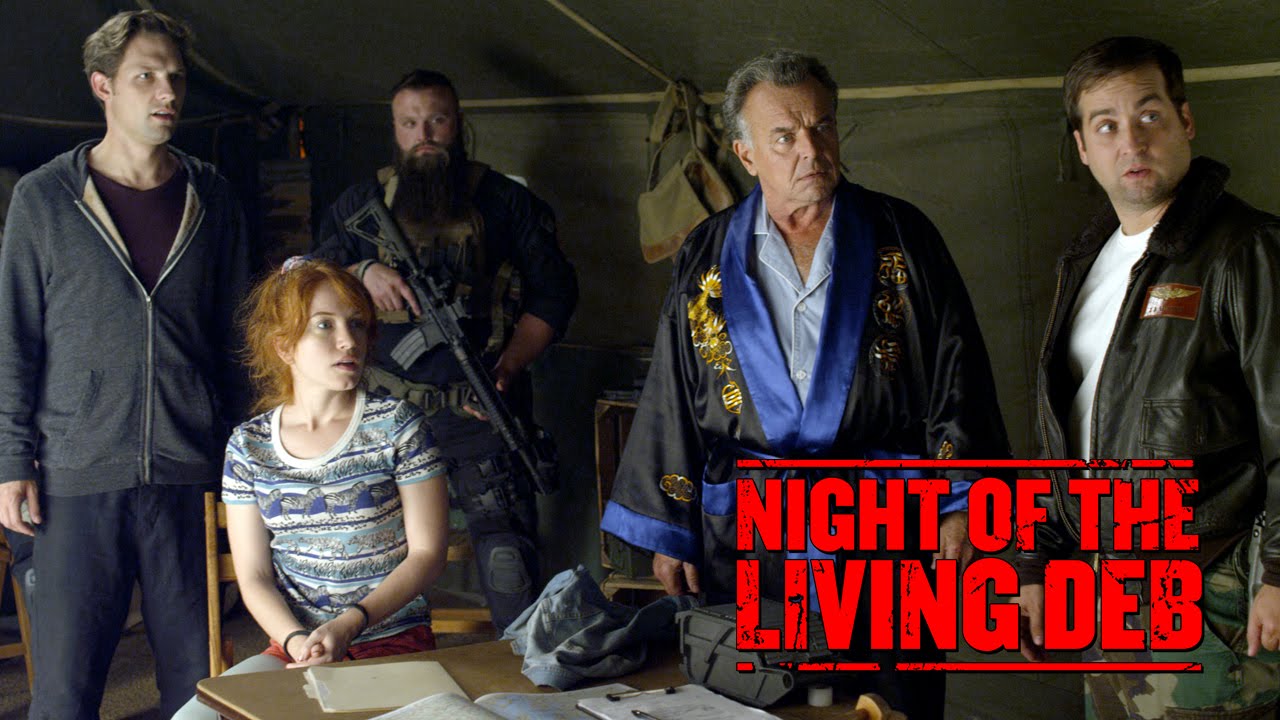 Night of the Living Deb is a really delightful little zombie apocalypse film with all the tropes of a good zombie flick, but it’s got something extra in the way of a great romantic comedy

Plot: After a girls’ night out, endearingly awkward Deb wakes up in the apartment of the most attractive guy in Portland, Maine. She’s thrilled, but she can’t remember much of what got her there. Pretty boy Ryan only knows it was a mistake and ushers her out the door… into a full-scale zombie apocalypse. Now, a walk of shame becomes a fight for survival as the mismatched pair discovers that the only thing scarier than trusting someone with your life… is trusting them with your heart.

Review: Deb (Maria Thayer) is one of those girls you might meet and find funny for awhile, but a little bit of her goes a long way, and so when she somehow manages to bag a good looking guy named Ryan (Michael Cassidy) at a bar on the night he’s dumped by his fiancée, she considers herself the luckiest girl on the planet. When they both wake up at his place the next morning, neither one of them remembers what happened the night before, and so they awkwardly part ways, seemingly never to see each other again. But as they make their ways apart, they both realize that the zombie apocalypse is in full swing, with flesh eating zombies raging on the streets, with nary a TV signal, radio wave, or cell phone reception to shed light on what is going on. They reconnect by necessity, team up, and try to formulate a plan to survive the day, despite their conflicting emotions toward each other (she’s head over heels infatuated with him, while he can’t believe he stooped so low). They make their way to his father’s estate and hunker down, but when his father (played by Ray Wise) reveals himself to be the culprit behind the apocalypse (he inadvertently tarnished the water supply with toxic chemicals), the plot thickens when Deb, who’s a reporter for a local news station, thinks it’s a wise idea to go to the news station and broadcast a report on what’s happening all around her. The military comes to town (and of course quarantines the city and plans to nuke it), but leave it to Deb to sort of save the day and gain herself some respect and a little love from Ryan, who finally comes into the light when he sees that Deb is his perfect match.

Director Kyle Rankin’s Night of the Living Deb is a really delightful little zombie apocalypse film with all the tropes of a good zombie flick, but it’s got something extra in the way of a great romantic comedy, with the outstanding Thayer in the role of Deb, who’s a constant source of goofy comedy that never fails to work. Rankin has worked in the genre before with solid apocalyptic projects such as Nuclear Family and Infestation, and he’s got an interesting sense of style that transcends indie filmmaking and crosses over into the fringe of the mainstream. The apocalyptic themes of the film are firmly in place here with Night of the Living Deb, but by the end of the film the apocalypse is revealed to be more or less contained (in a similar way that Shaun of the Dead shows), but any true fan of the genre should make watching this a priority. It’s really fun. Written by Andy Selsor.