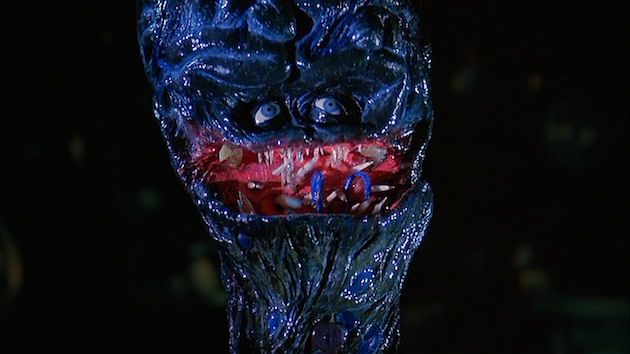 It’s a wild, unique ride. The special effects are vivid and memorable, as is the allegorical theme of drug addiction. The Blu-ray from Arrow is fantastic.

Plot: One morning, a young man wakes to find that a small, disgusting creature has attached itself to the base of his brain stem. The creature gives him a euphoric state of happiness but demands human victims in return.

Review: Remember the old commercials where an egg was cracked onto a sizzling hot pan, illustrating what your brain was like on drugs? Frank Henenlotter’s Brain Damage is the perfect parallel to that. It shows us what our brains would be like on an alien parasitic drug known as “the Aylmer,” an ancient, intelligent being that attaches itself to the back of your neck and uses humanity like a food source, but finds someone to addict to its irresistible blue substance found within its glands. The film begins with the Aylmer’s exodus from an old couple’s apartment. The couple virtually goes insane when they realize that their parasite has fled, but it doesn’t go far: It ends up down the hall in yuppie Brian’s (Rick Hearst) bathtub, and then promptly on his neck, where it addicts him on its unique drug, sending him on a spiraling descent into bad, befuddling behavior, and then forcing him into a life of murder, as the creature must feed off of the brains of its victims in order to survive. Even when Brian realizes what he’s got for a new best friend, he is uncontrollable to stop his addiction and he’s at the mercy of the evil thing that has him under a vice grip. When he gives cold turkey a shot, he faces the ultimate withdrawals (including vivid, gory visions), and so the only way he’s going to conquer the Aylmer is to try to destroy it once and for all.

A startling allegory sprung from the mind of cult film auteur Henenlotter (who did the body horror comedies Basket Case, Frankenhooker, and Bad Biology), Brain Damage is part horror film, and part dark comedy satire, but it’s all cult film, destined to live on and slowly garner new fans who are lucky enough to discover it. It’s a statement on the ’80s yuppie drug culture (like Less Than Zero and Bright Lights, Big City), done through the filter of a creature feature and Henenlottter’s own bizarre, inimitable style, and there’s nothing else quite like it. The creature and gore effects were done by Gabe Bartalos, and once you’ve seen the infamous blow job scene or the brain pulling scene, you can never unsee them. Cult horror host John Zacherle provided the voice of the Aylmer.

Arrow Video has just released a limited edition Blu-ray / DVD combo set of Brain Damage and it’s loaded with new special features. I discovered this movie when Synapse released it onto DVD, and it was an essential release back then, and so this totally upgraded edition is a real treat. The film looks stupendous in high definition, and some of the newly produced features include a new audio commentary by Henenlotter, new documentaries, shorts, and newly commissioned artwork on the slipcover and sleeve, with reversible artwork. There’s also a thick insert booklet with notes by Michael Gingold. A solid, commendable release, all around.