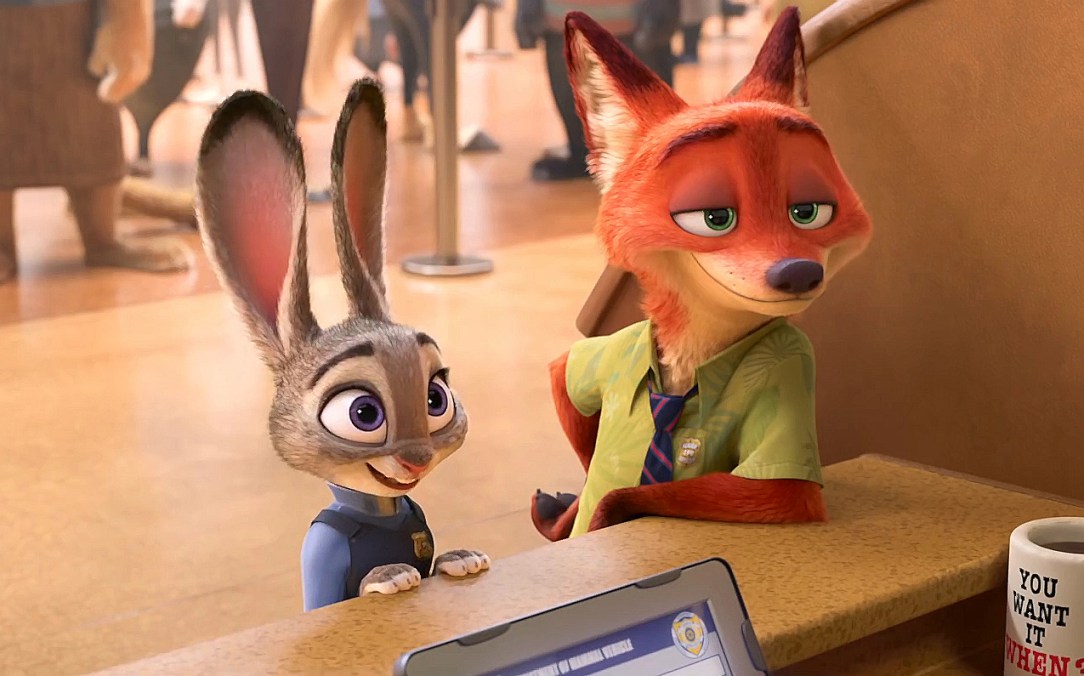 It’s one of Disney’s “grittier” animated films. It feels like a Phillip Marlow mystery, with lots of action. Similar to WHO FRAMED ROGER RABBIT?

Plot: In a city of anthropomorphic animals, a rookie bunny cop and a cynical con artist fox must work together to uncover a conspiracy.

Review: All her life growing up in Bunnyburrow, bunny Judy Hopps (voiced by Ginnifer Goodwin) has only had one dream: To be Zootopia’s first bunny police officer. When she’s finally of age, she trains at the police academy, excels at the program (it takes her awhile to measure up physically, but she gets there), and then she’s instated at a department in the middle of the melting pot metropolis known as Zootopia. Her first assignment is writing parking tickets (which she’s great at), but on that first day she meets a fox named Nick Wilde (voiced by Jason Bateman), who she quickly learns in a wily con artist. She could turn him in for several infractions of the law, but instead she partners up with him when she realizes that his streetwise sense can help her solve a case she was never meant to solve. She stumbles on a plot concerning a very serious issue going on in Zootopia: once tame animals higher up on the food chain are acting out of congress and turning feral, which poses a major threat to all of Zootopia. Judy and Nick seem to be the only two animals onto the plot, but when they start investigating, they unearth a whole slew of micro-mysteries that require attention ASAP! Their adventure gets them chased by deadly, feral animals, leads them into a high speed locomotive chase, and a sinister plot to undermine what Zootopia is all about: to incorporate all creeds, species, and types of animals in the animal kingdom.

A pseudo-riff on Who Framed Roger Rabbit?, Disney’s Zootopia has one of the “grittier” animated Disney movies, but that’s not to say that families and grown-ups won’t enjoy every minute of it. It follows a very linear (and somewhat complicated) plot that requires your attention, and its characters are really the selling point. Judy Hopp and Nick Wilde make a great buddy/buddy cop team, the likes of which we haven’t really seen from Disney before. This movie feels like a neat little private eye movie … imagine a Phillip Marlow story filtered through animation, with high speed chases and clever twists, turns, and comedy, and Zootopia is what you’d get, and all said and done it’s a nicely balanced crossover appeal film for even hardened fans of action, suspense, and mystery. Filmmakers Byron Howard, Rich Moore, and Jared Bush crafted a blockbuster smash hit that will most certainly have a long shelf life.

Disney will be releasing a supplement-heavy Blu-ray/DVD combo set of Zootopia on June 7th.

Rating: PG in U.S. and Canada