Arrow Video’s three-disc, five film box set release of Years of Lead: Five Classic Italian Crime Thrillers 1973-1977 is a stellar piece of hardcopy media with tons of bonus material and a booklet that comes within the box. With commentaries, alternate endings, and oodles of choice features, this is a great, enjoyable set for the hardcore Italian film completist. Available now!

Three casual friends begin a series of senseless crimes that escalate, prompting panic from the police.

Ovidio (Joe Dallesandro) is a callously bored data entry worker married to a social climber who works at a hospital. He has several casual friends – a pencil pusher named Giacomo (Gianfranco De Grassi), and a skittish, timid immigrant named Pepe (Guido De Carli) – and while at a massively attended soccer match, Ovidio instigates a riot in the crowd just to see what would happen, and as a result over 40 people are seriously wounded, and one person is killed. While escaping the maelstrom, the three friends steal a car and then a motorcycle just for the hell of it, and leave another person wounded. The police are flummoxed by the sudden wave of crime, but a veteran detective named Santiaga (Enrico Maria Salerno) begins examining the purely random acts of senseless violence that seems to be occurring almost on a nightly basis. Ovidio and his two friends go on a nightly spree of looking for trouble: They murder a pimp and a hooker just because they can, and another day they kill a truck driver for cutting them off on the highway. Another night, they steal a cab and pick up two beautiful debutantes and rape and murder them too, but when one of the women turns out to be a dignitary’s daughter, the police are pressured to find the killers ASAP. When that particular crime has a witness, the three guys realize that their crime wave might be coming to an end, but instead of being discouraged, Ovidio ramps up his irreverent behavior and goes on a rampage all by himself. With Santiaga closing in on a suspect, the time of the Savage Three comes to a head.

Shockingly nihilistic and surprisingly prescient for this present day, Savage Three feels like it could have been made today, if it weren’t for its styles and outdated looking cars, clothes, etc. We hear about mass shooters all the time now, and the three main characters in the movie personify that kind of subject of guys who do terrible things out of boredom or rage against society. It’s a pretty powerful (and sometimes shockingly funny) little movie, but you’ve got to have a Falling Down kind of sense of humor to appreciate it. From director Vittorio Salerno.

Masked thugs rob a bank, kidnap a hostage, and later torture and murder their female hostage just for the thrill of it. It becomes clear who the robbers and killers are: Their leader is a handsome sociopath named Tony (Cesare Barro), a wealthy young man whose father is a well respected member of society who holds his son up to a high standard. Tony’s friends are all in the same inner circle, including one of their girlfriends, a thrill-seeking nympho named Silvia (Annarita Grapputo). Tony and his friends go on a daily and nightly rampage: Tony targets his father’s favorite whores (out of some kind of sick revenge on his dad), and after he and his buddies maliciously degrade and murder one of them, it’s enough to gain the attention of a hardened police inspector named Muzi (Jean-Pierre Sabagh) who immediately sees Tony as a prime suspect over a little clue. Muzi comes up with a reckless and ill-planned trap to snare Tony: He’ll have a beautiful detective named Germana (Paola Senatore) pose as one of Tony’s father’s hookers and hopefully catch Tony in the act of trying to rape / torture / or kill Germana. The plan is a miserable failure, and instead of advancing the investigation, the plan almost gets Germana gang raped. If Muzi is going to catch Tony, he’ll have to get closer to Tony’s crew, which means he’ll have to dive deep and possibly end up in the crew’s sadistic crosshairs.

From director Mario Imperoli, Like Rabid Dogs has a noticeable cruel streak towards women, and to call it misogynistic would be an understatement. The film has some shocking, jaw-dropping moments in it (too graphic to list here), but the movie also has a bloody climax where a mob beats a villain to a pulp, so I guess there’s a payoff. The movie feels a little too close to exploitation and leery smut than a straight-ahead politiziotteschi, but fans of these hardboiled Italian crime thrillers will likely get what they ask for with this one.

A witness to a murder says nothing about the crime and ends up becoming the prime suspect.

Fabio (Enzo Cerusico) is a more or less content father and husband, and on a random Sunday afternoon he goes fishing out at a remote lake in the Italian countryside not too far from where he lives in the city. He hears a woman struggling, and he follows the sounds into the reeds, where he witnesses a naked woman being beaten to death by a middle-aged man (Riccardo Cucciolla) who sees him looking at him. They make eye contact, and Fabio runs away in fear. Panicked, he drives away and into the nearest village and asks for police, but he’s directed to the city. He also notices that the murderer is trailing him, and instead of going straight to the police to report the murder, he goes home in fear. Later that day, the murderer – a respected professor named Eduardo – goes to the police and reports the murder and describes the witness as the killer. When Fabio reads the news over the next few days, he realizes that he’s been targeted as the killer, and he begins to have a nervous breakdown over his predicament. Instead of going to the police with his story, he begins acting like a guilty man, going so far as to change his appearance, the color of his car, and acting weird around cops. By the time he goes to the police with his story, it’s too late: the case has been built against him – including fingerprints and eyewitness accounts – and Fabio’s fate will be sealed unless he can figure out how to reverse the doom-filled fate that is enclosing all around him.

Believable and nerve-wracking, No, The Case is Happily Resolved depends on your willingness to watch an innocent man make consistently poor choices, which prove to be fatal to the public perception of him, but if you realize that this sort of thing could happen to anybody if they make the wrong choices, then the movie is pretty powerful. There’s a good vs evil dynamic at work here, and sometimes if a good man says or does nothing, then evil will indeed prevail. Director Vittorio Salerno’s film is pretty grim and bleak (especially if you watch the alternate ending, which he preferred), and he seems to be saying quite a lot about the blue collar working class and the way they view authority.

After an inspector’s wife is murdered by a crime lord, the inspector is granted permission to form an off-the-books elite squad of no-rules cops who hunt down the cadre of criminals plaguing the city.

Inspector Vani (Marcel Bozzuffi) busts a crime ring with all barrels blazing with his team, but not without consequences: The crime lord whose business was interrupted targets the Inspector’s family, and after the inspector’s wife is murdered in cold blood in front of their son, Vani regroups and licks his wounds. Vani is granted permission to form a hardened elite squad of cops who are allowed to carry deadly Colt .38 handguns, and after a three-month training session, Vani releases them into the wild city of Turin where the crime lord (played by Ivan Rassimov) is running rampant. Feeling confident and unrestricted, Vani’s special squad goes on their own rampage of unchecked crime, which includes outright no-questions or interrogation killing if they feel the need to. When Vani is reprimanded by his superior for the actions of his team (they even shave their bullets to be more deadly), Vani has to up his game and join his men on their quest to kill or capture the crime lord before his son is murdered.

Part Dirty Harry, and part poliziottesche thriller, Colt .38 Special Squad hits pretty hard right where it hurts, but it goes on a bit too long to be completely captivating. Director Massimo Dallamano (who was killed in an accident shortly after this was released) gives the movie its own verve and style, and it’s fairly standard as far as these films go. It’s solid when it needs to be and it has some riveting sequences of violence (a motorcycle chase is a highlight) to enliven the proceedings.

A hotshot cop finally gets the gig he’s been pining for since joining the force: He gets to rig his car with a high powered engine so that he can catch a thief who always gets away because his car is faster than any cop’s.

Rookie cop Marco Palma (Maurizio Merli) is a plague upon his department because he’s always wrecking police issued cruisers that can’t stand a chance against crackerjack thieves and robbers who always make a snappier getaway when fleeing the scenes of their crimes. Marco is constantly badgering his chief to let him install a stronger racing engine in a police car, and when his chief eventually (and reluctantly) agrees to let Marco do what he’s always wanted to, it comes time to train Marco to race like a thief instead of like a cop. He spends days on end at the race track wrecking car after car until he finally begins racing like a pro, and only then is he ready to go after the single most wanted thief in the city, who constantly gets away and taunts the police after his clean escapes.

A smart idea with some truly inspired moments (one which had me laughing uncontrollably for all the right reasons), Highway Racer is a little boneheaded thanks to its casting of supermodel-looking Merli in the lead (he’s a meathead, what can I say?), but it’s entertaining when it needs to be, so who cares? With some solid car chases and a pseudo buddy / buddy dynamic that turns the conventional cop movie on its side, it manages to elevate a simple concept and make it fresh. From director Stelvio Massi.

Arrow Video’s three-disc, five film box set release of Years of Lead: Five Classic Italian Crime Thrillers 1973-1977 is a stellar piece of hardcopy media with tons of bonus material and a booklet that comes within the box. With commentaries, alternate endings, and oodles of choice features, this is a great, enjoyable set for the hardcore Italian film completist. Available now! 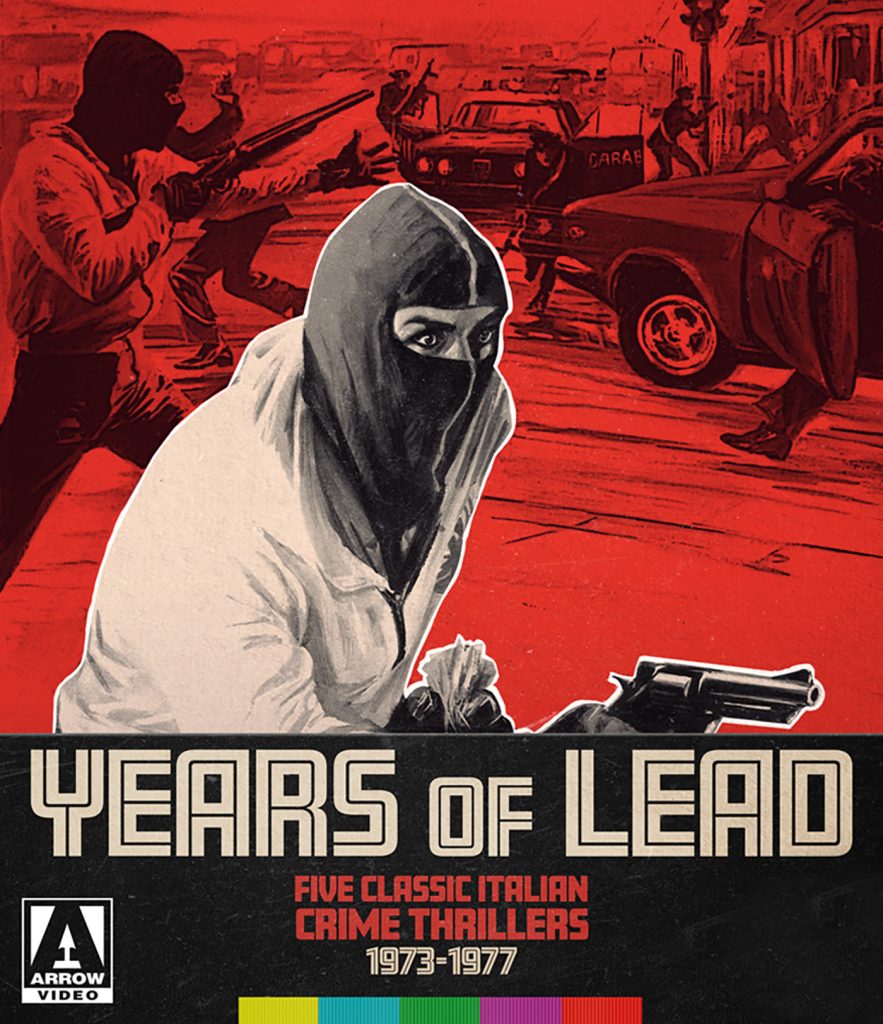