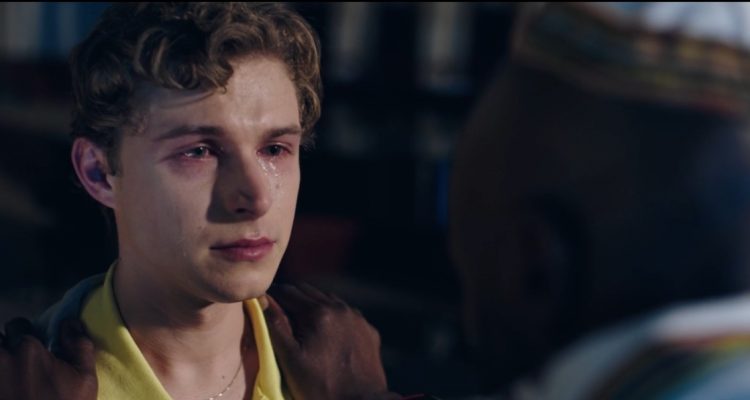 What is a rabbi supposed to do if a troubled person comes to him and says he doesn’t want to live? This is the premise of Michael Carnick’s latest drama, Obsidian Dolls, starring Sammi Rotibi (Django Unchained) and John Berchtold (Manhunt). You may remember Carnick’s other film he wrote, Who’s Driving Doug, which received a lot of attention back in 2016.  We decided to speak with Carnick about Obsidian Dolls and his other project, Manny Fantasma. Read here:

-How did you come up with Obsidian Dolls?

During my MFA studies I watched a documentary about Operation Solomon. At the time I was unaware that there were Ethiopian Jews, and I felt like it’s a story and perspective worth exploring. I hope I did it justice.

-From your first script to Obsidian Dolls, how do you think your writing has changed?

I’m constantly evolving as a human being and as a writer. I hate what I wrote a year ago, and really hate what I wrote ten years ago. Perspectives, relationships, ideologies, these are all things that inform writing but are in constant flux. I think, overall, I’ve been going less “by the formula” as time goes on. As I grow older, I find myself being bored by formulaic stories. They work well, that’s why they’re tried and true, but taste buds change as we age. At this point in my life I’m more energized by films that tell things in a new or different way. Even if they don’t quite work, at least they get me thinking and talking, whereas popcorn films just disappear from consciousness as soon as they’re consumed. 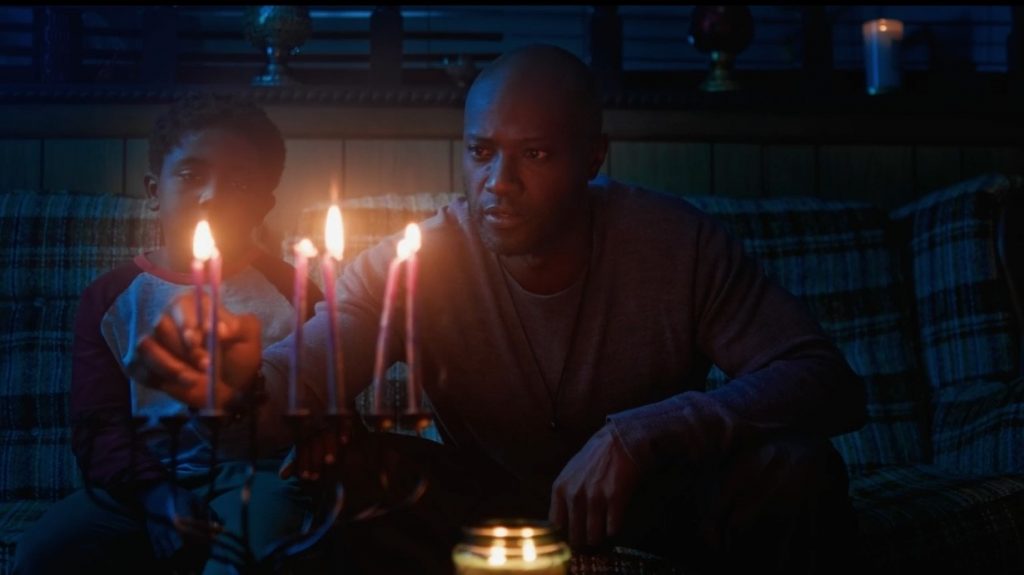 –Obsidian Dolls description reads: On the eve of the Yom Kippur, an Ethiopian born rabbi, “Nate”, is approached by a troubled young man, “Isaac”. Isaac tells Nate that he wants to end his life, but before that, he wants Nate to recite the Mourner’s Kaddish for him. What transpires will test the limits of faith, compassion, and humanity. Was this film based on a personal experience?

I wrote the first draft of the script during a particularly dark point in my life. I was searching for some meaning in the chaos. I relate a lot with Isaac’s struggle to fit in with the world, and his quest to find some spiritual peace. Religion and faith certainly can fill that void for a lot of people, and my state of mind at the time naturally fit that avenue of exploration. Being raised in a Jewish household, I often felt that I was the part of a strong community, but there is a big part of the Jewish identity that is wrapped up in being nomadic and outcast. We feel like we have a place but not a home. The whole diaspora culture is something that fit naturally with these ideas of feeling lost and searching for answers. So under a microscope you could say that Obsidian Dolls says a lot about me, and my personal struggles and feelings about faith, and my journey so far as a human being. The characters and premise, though, are fictional.

–Obsidian Dolls stars Sammi Rotibi, whom has been in a lot of big films, such as Batman v Superman: Dawn of Justice. Do you have a favorite film that Sammi has been in?

Django Unchained. It’s hard to compete with Tarantino. I was also a fan of the TV series Mars, as I’m a big sci-fi nerd. I’ve always been into space flight and world colonization, so it ticked a lot of my boxes. I’d like to see that show get another season.

-Was there a specific project you saw Sammi in that you knew he would be right for Obsidian Dolls? The same for the other lead, John Berchtold?

I saw Sammi in an interview. I can’t remember what it was about, now. But I knew from that moment that he was the right one. Just the way he spoke and presented himself. He was just being himself, really friendly and jovial, like he naturally is. Kind of opposite to the role he played in Obsidian Dolls. But there was something special there. It’s hard to describe. When you cast people in roles, sometimes you see a spark, sometimes you don’t. John Berchtold submitted a video audition, and the same thing happened. He just felt like the person in the story was alive, right in front of me. They are both such amazing, talented actors. I really lucked out there.

-You released some stills from Obsidian Dolls and in one of them John Berchtold is lit in dark blue. Can you talk about what goes in to a shot like that?

That’s not lighting. John Berchtold just radiates spooky dark blue. In all seriousness, that particular scene is during a sort of flashback sequence, where we had to distinguish reality from memory, and the lighting gag helped facilitate that. John’s character, Isaac, lives in a “cold” world (depression, growing up in the snow), while his counterpart Nate lives in a “hot” space (religious rigidity, growing up in the desert). My director of photography, Gabriel Carnick and I, discussed at great length on how to communicate these cross identities visually. We wanted to throw in some unmotivated light, since this was supposed to feel like a cinematic stage play, we weren’t so concerned with the realistic origins of that light or the logistics of how it got there, we were more centered on the feeling it conveyed. Gabriel did an outstanding job figuring out the lighting, and I think I might have broken her brain a few times with my requests, but I think she has the uncanny power to bend the laws of physics with her lenses. Good cinematographers are techno-wizards and crazy artists. 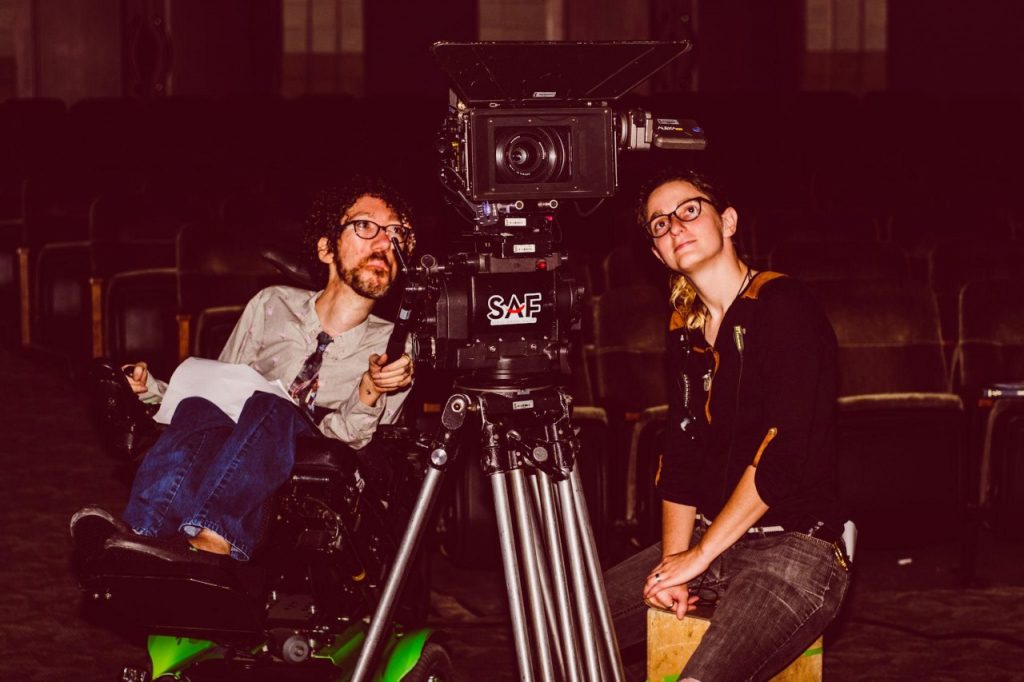 -You wrote a TV pilot called Manny Fantasma. You have described it before as, “Monsters are out there. Vampires, ghosts, zombies, and werewolves — they’re all real, but not all of them are bad. Some of them just need to talk. Fortunately, Manny Fantasma, paranormal psychiatrist is always on call.” Would you ever revisit this as a feature film?

Manny Fantasma is a personal favorite project of mine. I have a feature film version written out, but it’d really be served better as a TV series. Manny deals with several different patients, so you’d need a lot of screentime to explore all of their personalities and arcs. Plus, Manny has his own baggage to deal with. I have the whole series planned out, and it goes on quite a wild journey.

-Is there a film you saw when you were younger that made you want to become a filmmaker? Or just one that had a big impact on you?

One of the earliest and strongest memories at the cinema was watching The Land Before Time. When the (spoilers) mother dino dies at the beginning, I was emotionally wrecked. It was the Bambi of my generation. As fate would have it, three decades later I would be studying under Stu Krieger at UC Riverside. Stu wrote Land Before Time. Life is funny sometimes. I often joke with Stu that his film turned me into the burned out cynical man that I am today. How cool is the fact that you can personally touch someone that deeply at such a young age, just with words on a page? Then thirty years later you can study under that person and say, “Hey, you’re my hero. You made me cry when I was six!”

-You have spoken in previous interviews about your disability and how it has inspired you to create characters that are not always seen a lot in film/tv.  Is there a character you have not gotten to show yet?

I have dozens of characters living in text files on my harddrives, and many more kicking around in my brain. I hope I get the opportunity to present more of them in the near future.