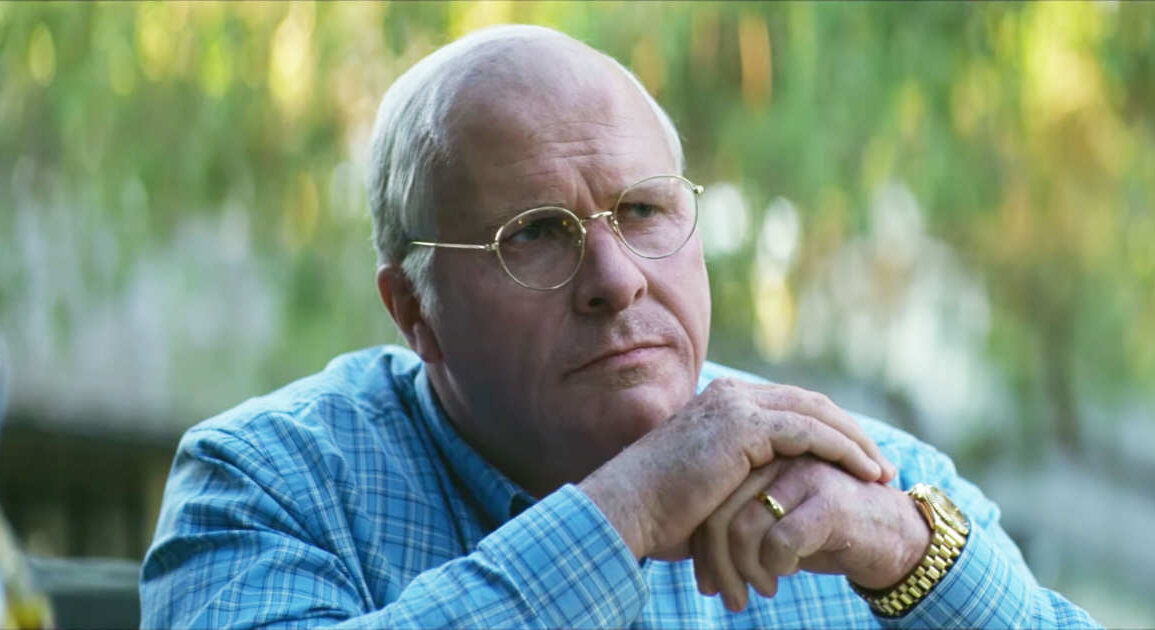 Vice is a hugely entertaining piece of satire with Bale proving he is one of the greatest talents working in Hollywood today.

Plot: Governor George W Bush of Texas picks Dick Cheney, the CEO of Halliburton Co, to be his Republican running mate in the 2000 presidential election. No stranger to politics, Cheney’s impressive résumé includes stints as White House chief of staff, House Minority Whip and defence secretary. When Bush wins by a narrow margin, Cheney begins to use his newfound power to help reshape the country and the world.

Review: It is difficult to review films about politics as readers will approach it on the basis of their own prejudices.  However, I will give this one the old college try.

Director Adam McKay is not making an objective bio-pic here.  This is a faux-documentary filmed by a drunk guy.  It flashes back and forward between the young Dick Cheney and the one we recently know.  Text flashes manically across the screen with accusations leveled at the former Vice President of the United States that are designed to depict him as a total monster.

This is not a feel-good movie – it is a screeching hatchet job by Hollywood liberals.  The idea that star Christian Bale can say as he did in a recent interview, that audiences on the Left and Right will appreciate it, is frankly hilarious.  Conservatives will rage at its caricature depiction of Cheney, and liberals will just rage at Cheney.  So, everybody’s unhappy when they leave the theatre.

However, this is a well-made and arresting film which asks questions about the use and possible abuse of executive power in modern American politics.  It is all about the Unitary Executive – in other words could constitutional law be interpreted in such a way that a United States President can rule like a King?  Can he or she circumvent the Legislative and Judicial branches of government to attain absolute power?

Vice maintains that Dick Cheney did just that.  He manipulated a President with limited experience and intellect to amass huge power to himself.  The scene on the day of 9/11 shows him as being more interested in speaking with his lawyer about the constitutionality of his decisions than in the well-being of the American people.  Doubtless we will never know for sure, but these are big accusations to make.

Christian Bale’s performance as Cheney is a double-edged sword.  On one level it is amazing: he covers his character’s mannerisms and facial tics very well. However, in McKay’s attempt to portray Cheney as a modern incarnation of Lucifer himself, it is also a caricature.  Bale shows him as a mumbling schemer who plays every one of his cards close to his chest.  I watched an interview with Cheney after this screening and he is much more animated in real life.  The role that Bale plays in this film feels one-dimensional.

Amy Adams is the true star of this show.  She plays Lynne Cheney, who in the early stages of their relationship is responsible for knocking her husband into shape from a boisterous drinker to a focused bureaucrat and then politician.  Adams infuses the role with fire and ambition.  Lynne will stop at nothing to ensure her husband achieves power and success.  She is ruthless.

Sam Rockwell commendably underplays his role as President George W. Bush.  A barbecue loving heir to a political dynasty, who knows he is in over his head, and unapologetically leans on Cheney for support.

I enjoyed Steve Carell as Donald Rumsfeld whose career goes through many ups and downs.  I think he could have used a little extra screen time to flesh out the character more.

Tyler Perry plays Colin Powell as someone who is out maneuvered by the other big beasts in the administration, but his impact in this film is rather muted.

The focus is on the Veep himself and his pathological instinct for secrecy.  The audience is deliberately kept in the dark about Dick Cheney’s true feelings and motivations.

Vice is bold and not at all subtle satire.  Nor does it strive to be subtle.  However, it asks vital questions about potential overreach of Presidential power; and these are questions that urgently need to be addressed.

Now, are we likely to see a similar incisive satire about Hillary Rodham Clinton from our Hollywood friends?  No?  That’s a shocker.