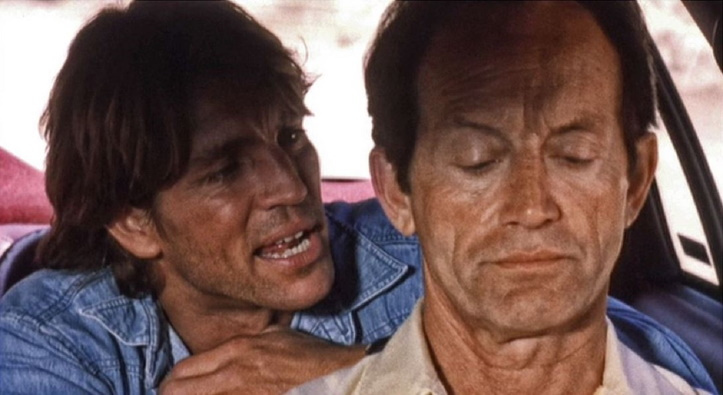 Plot: When drifter Adrian (Eric Roberts) strikes up a conversation with a man named Jack (Lance Henriksen) one night in a restaurant off the main road, Jack uneasily agrees to give Adrian a lift. As the two drive, Adrian starts making Jack increasingly uncomfortable by repeatedly alluding to a secret Jack is keeping. Meanwhile, news reports are spreading about a vicious murderer known as The Hatchet Man — who seems to be committing crimes wherever Adrian and Jack turn up.

As today is Lance Henriksen’s birthday I thought I would revisit one of his more underrated movies – The Nature of the Beast. In this crime/horror movie both Eric Roberts and Lance Henriksen are at their absolute best.

You can tell there is something a little off about Henriksen’s character Jack from the start as he seems to take too much of an interest in the killings but Adrian (Roberts) just makes you feel uneasy the entire time he is on screen. He can play these kinds of roles with ease and makes it look easy but he brings the right amount of menace and swagger to Adrian so we know he is not a nice guy.

I feel it would make for a great double bill with The Hitcher as it has that same kind of atmosphere where it’s just a study of evil and takes place on the lonely dusty desert highways of America.

I like how we never actually see any killings take place, only the aftermath so it keeps the mystery going about who is truly the real villain. It’s not a huge surprise how it ends but watching these two underappreciated character actors in their prime is never less than engaging.

Overall, The Nature of the Beast is dark journey into Hell with both Roberts and Henriksen as magnetic as ever keeping you on the edge of your seat for the brisk runtime. It’s never dull and makes for a compelling study of evil.