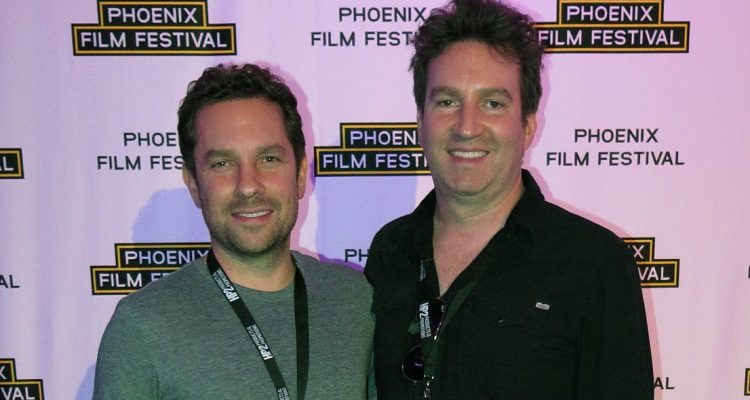 Volition was one of the most ingenious films I’ve watched for some time; how did the initial concept for come about?

TDS: Thanks very much. We are so thrilled that the movie connected with you!  Volition came about in a few stages.  The original kernel was something I wrote in film school as a short.  About a scientist who develops a pill that allows him to see 15 seconds into his own future.  He wasn’t a regular psychic who could see other people’s lives; rather he could only see what he himself would ultimately experience.  The script was “cool” but didn’t really have depth of character, heart or themes yet, so I tabled it and made something else at the time.  Unable to forget about the concept, and with a little more salt in my soul, I started to really like the idea about a down and out character who feels like a prisoner to what he foresees.  At that moment in my life, I was actually feeling quite stuck in my film/art life – and couldn’t see a way out of it.  And that’s when everything clicked.  I realized that my very “belief” was holding me prisoner.  I realized that I had to face an “existential death” of my ego/fears and push harder for my goals.  This became the foundation for James, who, like me, was a prisoner to his “belief” about his future.  And it’s only when he has to face a sure-thing death that he gets up and pushes against his apathy and beliefs.  I wrote a first draft and then RWS jumped on board.  He was always involved as a sounding board during my many dark days in the trenches of those early pages, and he had been pitching me this interesting idea of using James’ unique perceptual affliction against itself, which would ultimately lead us to pulling the concept apart and building it back from the ground up together.

TDS: Very difficult and very rewarding!  I don’t think either of us has ever taken on something so challenging.  We knew we had a great foundation in James and his unique challenge of trying to change his own fate, but with that comes so many rules and complexities that it certainly pushed our little brains into OCD overdrive.  On a practical level, we break the story together: we have long discussions about everything – and we always push for justifying character and story over any whim either of us might be clinging to.  We’re both strong personalities, but we don’t have egos about the work, so it really allows us to go deep into the writing, knowing that it’s a safe space to try things.

RWS:  As for the actually process of writing, it’s a lot of napping.  I kid.  Sort of.  Like the film itself, our writing process is iterative, with the script (hopefully) improving each layer that’s added.  We start with the shared outline, which we then split down the center of the story.  We’ll then each take a half, write it into screenplay form (adding dialogue and specific scenes), and then we’ll swap halves and re-write each other’s work.  By the end of the process, the two halves have had both of our eyes on them hundreds of times.  It becomes a real melding of minds.

Following on from that how long did it take from concept to completion (scriptwise)?

TDS: Once I had the original outline, which took me a few weeks, the first barf draft took me two weeks of manic writing.  Ryan and I then used that original draft as a sort of character bible.  We knew we were going to stick with the main theme and main characters (with some tweaks), but we also had to completely re-do large elements of not just the actual plot, but how that plot is told.  So that took a while.  We both had other work on our plate, and we were writing this on spec for ourselves, so the writing process got elongated more than it had to.  In summary, we started writing in late 2014 and we shot in the summer of 2017 and early 2018.  Hence why we have both aged 25 years in 3 years.

RWS:  It was a pretty wild process, because we actually wrote about four completely different versions of the script before coming to the version you see before you.  Like Tony mentioned, the core concept (an exploration of the roots of clairvoyance), the characters and the theme remained consistent, but we really jumped around in terms of how to execute those ideas.  The film has a unique structure, so that took us some time to firm up.

How much research did you do beforehand regarding the science of Volition?

TDS: We proudly did a lot of research.  I’m a huge amateur quantum physics enthusiast and spent many late nights pouring over the different hypotheses out there.  The “observer changing the observed” just by looking at it is the most profound concept.  And again, it relates to both human psychology and to concepts of time/perception: if I “the observer” think that I’m a prisoner to my thoughts “the observed,” then I am a prisoner — without realizing that I’m the architect of those thoughts.  If I choose to think differently, what I see also changes.  Hokey, but it’s actually the nature of us and quantum physics.

RWS:  Then came the question of how much of that research did we want to add into the film.  Tony and I went through a ridiculous number of versions of our key “science” scene, where some of this theory is laid bare for all to see.  It’s a section that explores the causes of James’ clairvoyant affliction.  Of course, the challenge is finding ways to convey some of these ideas, without all becoming purely expositional.  We did our best to pepper hints at the science throughout the film, so all ideally adds up to a unified theory.

TDS: We wrote HUNDREDS of versions of that science scene.  We even shot a much longer version than what’s in the movie.  When we did our test screenings or even our early script readings, our fellow sci-fi/quantum physics geeks loved the extended explanations and how it relates to and causes James’ clairvoyant affliction, but at the end of the day, we felt it just went on too long.  Most people are satisfied with a “Flux Capacitor” explanation, as long as it’s plausible within the world of the story.

Why was Adrian Glynn McMorran the right choice for James?

TDS: I repeat myself all the time with this, but Adrian is just one of those unique souls out there; a true and genuine artist who doesn’t have an inauthentic bone in his body.  For those that know his music, you can hear his heart in every lyric and line of melody.  His acting is no different.  He doesn’t act.  He experiences and reacts.  It’s so amazing to watch.  I’ve actually known him since we were both in high-school and this is now our third collaboration.  Through the years, Adrian and I have shared many conversations about love, loss, hope, wounds, redemption.  I think we’re both dreamers at heart and so I suppose I saw a bit of myself in Adrian, as I certainly see a lot of myself in the character of James.  He brought such grit and commitment to the role and I really couldn’t imagine James as anyone else.

RWS:  Adrian is part of the family in so many ways.  He and I used to do improv together in high school, and then we were involved in the theater program together, back in University.  He’s always been an incredible talent and we’re lucky to have him leading this film!

I’m a big fan of movie scores so I loved the music to Volition; how did you end up meeting Matthew Rogers and what was your process of working with him to make sure the music was exactly what you were looking for?

TDS: I met Matthew while I was editing a movie that he was scoring.  A very difficult and rewarding movie that pushed both of us to sharpen our creative skills.  I knew then that if he could survive that process and create such evocative music, then he could survive Volition!  Matt actually came on board quite late, and he just nailed it.  He’s such an intuitive person, with such an innate understanding of story and mood – so it was just such a win for us to get him on board. 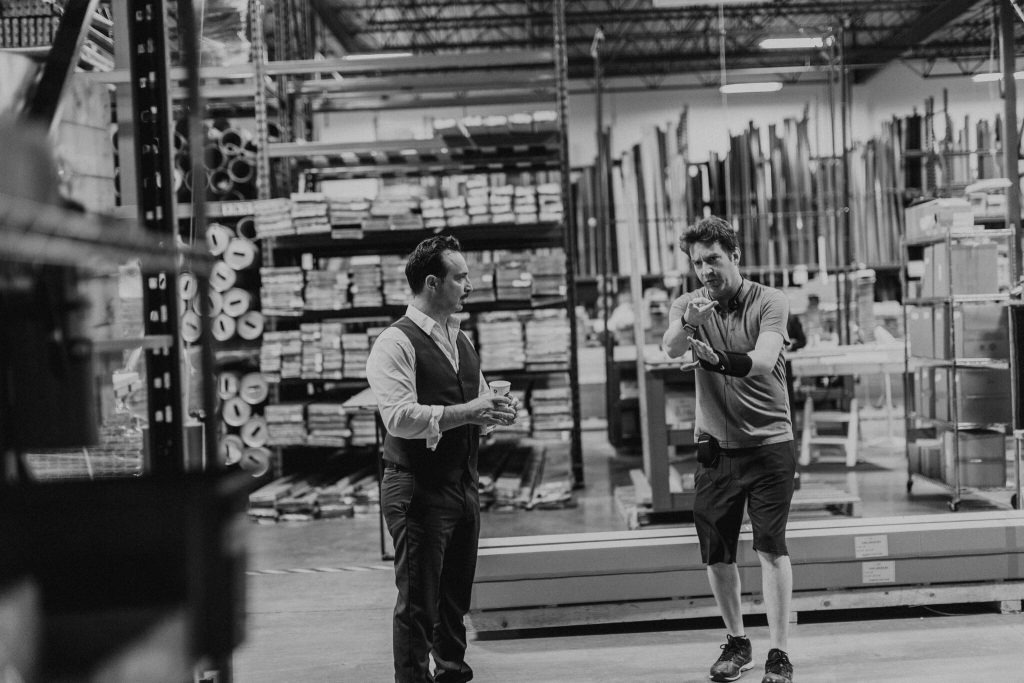 Going by the films themes do you believe our lives are determined by the choices we make or is it all pre-destined?

TDS: I would absolutely swear that it’s free-will.  Yet, I keep running into the most bizarre synchronicities and direct correlating events, that I think somehow both might be true… We’re fated to have free-will?

RWS:  I choose to believe we have free-will.  But then again, have I always been destined to make that choice?   These are thoughts that I kept us up during the writing of the film.  I often think that if there were a powerful enough computer — one with the ability to calculate the effects of every single fluctuation in the universe — then, perhaps, we’d see that the world is pre-determined.  Is this whole universe simply a preset unfolding, triggered by the nudge from some prime mover?  Can we ever know the answer to that?  Do we want to know the answer to that?  Again, this is where the naps come in.  I think we should sleep on this.

What would you like audiences to take away from the film?

TDS: I’m firstly just grateful that people are liking what we made.  It was such a family operation, so the response is very gratifying.  So that’s what we get to take away from the experience.  As for our audience, I hope they have a good time!  I also hope the film sparks a little internal debate within them regarding the forces of fate vs. free-will in their own lives.

RWS:  Same here!  We’re so thankful that people are giving our twisty film a shot.  We’d love to hear what people think once they’ve seen it.  Tony and I are both on Twitter (@tonydeansmith and @ryanwarrensmith).  We’re 100% open to engaging with anyone who has theories about the film.

Any plans to return to the sci-fi genre with any future projects?

TDS: Absolutely.  We have a few projects that are very near and dear to us within the sci-fi genre.  It’s stating the obvious, but we really love the allowance sci-fi gives a writer to push the envelope, tell stories relevant to today’s time – and to hopefully give our society some foresight into a better way of taking care of each other and the planet.

Thanks so much and best of luck with the film.