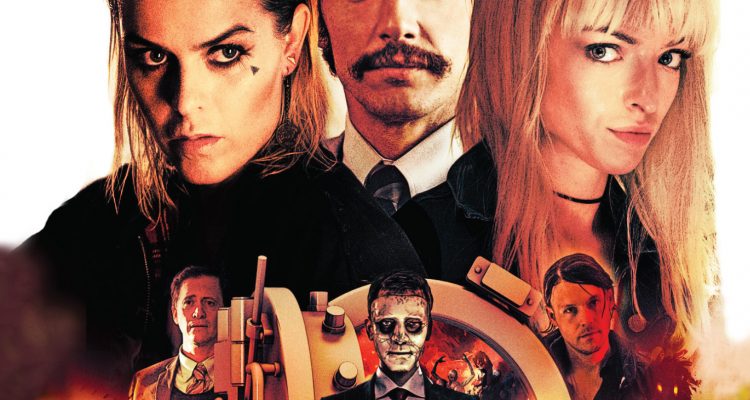 An intriguing variation on the heist genre, The Vault has some creepy visuals as it builds itself into a horror corner.

Plot: Two estranged sisters are forced to rob a bank in order to save their brother. But this is no ordinary bank.

Review: A family of desperate bank robbers invades a small bank and tries to pull of a heist before the authorities can be notified. They screw up royally when they realize the bank’s reserve of cash is a pitiful sum. The two sisters in charge – Leah (Francesca Eastwood) and Vee (Taryn Manning) – clash in their methods, and their brother Michael (Scott Haze) only agreed to the heist on the condition that no one gets hurt, but their plan goes sideways, and innocent people inevitably get hurt. A humble bank attendant (played by James Franco) offers some choice knowledge: Deep below the bank in an old section lies a bank vault with over six million in cash. The robbers salivate with the knowledge, but what they discover lurking in the shadows near the vault is an old buried secret that will kill them if they don’t cut their losses and leave immediately.

An intriguing variation on the heist genre, The Vault has some creepy visuals as it builds itself into a horror corner. The movie never quite explains itself with its haunted vault storyline, but it doesn’t really need to. The premise works thanks to a good build up, believable characters, and a dreadful atmosphere. Co-written and directed by Dan Bush, the movie packs a bit of a punch as a horror film, and if you’re not expecting to be scared, that’s a good thing.

The Vault is now available on Blu-ray and DVD from FilmRise and MVD Visual.