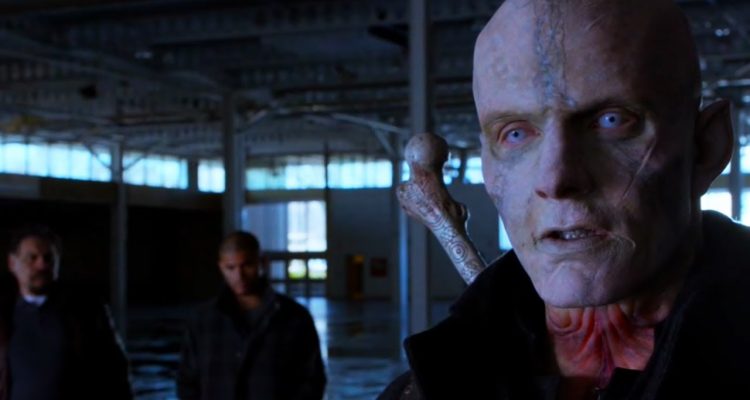 The Strain had a couple of great first seasons until the show jumped the shark at the end of Season 3 and didn’t really recover.

Plot: Humans fight for survival against a parasitic infection that turns human beings into blood-sucking vampires.

Review: I haven’t read the Guillermo Del Toro novels that this show is based on; nevertheless, I like Del Toro’s work in general (though more the earlier stuff than the recent), so I thought I would give this one a shot.

Running the course of four seasons, this tale gives a new vision of the classic vampire – vampirism is a parasitic organism (“worms”) that infect human beings and turn them into bloodsuckers. It’s an interesting take on a classic horror monster. The first two seasons really deliver on that promise. Set in New York City, there’s a lot of that helpless feeling you get when watching zombie movies when friend can turn into foe in a second and characters you grow fond of die in anti-climatic ways. Along the way, a series of compelling characters are introduced that take the narrative to new areas.

The cast is top-notch, and the characters are well-drawn and complex. Corey Stoll, who, to me, always had the chops to be a lead, plays the main character of Dr. Ephraim Goodweather, an arrogant and troubled man who takes on the mission of saving humanity. Along the way, he makes mistakes, encounters losses, and endures countless failures. It’s brave to make your main protagonist that fallible and, at times, unlikeable.

The other main good guys are played respectively by David Bradley, Kevin Durant, Ruta Gedmintas, Miguel Gomez, and Rupert Penry-Henry, are likewise captivating in their separate ways.  Of this quintet, my favourites are Durant and Penry-Henry – Durant’s Ukrainian ratcatcher-turned-strigoi hunter is hilarious with some of his quips, while Penry-Henry’s undead half-breed Quinlan is the best fighter of the group and the most focused.  However, each character has its own unique story, and it wouldn’t be hard to find fans of any of these characters.

As for the villains, they are played with refined yet sinister elegance by both Jonathan Hyde and Richard Sammel. In particular, Sammel is terrific in his role as a former Nazi concentration camp leader who now does The Master’s bidding. You can’t wait for his character to bite the bullet, but he proves surprisingly resilient, even when facing down death countless times.

The one character I never took a shine to is Goodweather’s son, played in season one by Ben Hyland and Max Charles in the subsequent seasons. Hyland was decent in season one, but Charles seemed horribly miscast in the role. He always had this sneer on his face, as if he found everyone contemptible, so it was hard to feel sympathy for him when his mother gets turned, nor his last-minute turn back to the good side believable. Charles would have been more convincing in a bullying role where he ends up getting his comeuppance at the end, not playing the redemptive part.

Charles is also responsible for the show jumping the shark at the end of the third season. When he watches his father kill his mother (who was turned in the previous season and who he witnessed sucking a helpless human dry), he goes batshit crazy, and after rebuking his father for killing her (after she tried to kill him and he watched a frigging parasite come out of her mouth), he detonates a nuclear bomb and blocks out the sun. Let me repeat that: he detonates a nuclear bomb. Ummm…over-reaction much? Also, I’m not sure how detonating a nuclear bomb that kills a bunch of other people…hurts his father? Ummm…yeah…okay.  After that, the series is pretty much a wash – it’s okay, but it lost a lot of its lustre for me after that.

As for the effects, they’re pretty darned good.  I like the looks of the strigoi, invoking that classic Nosferatu look. The parasites, while CGI, look detailed enough to be convincing. The Master in his first form is awesome, a hulking giant of a creature that towers over everyone else.

There’s quite a bit of action in what is otherwise a horror series. There’s a satisfying amount of splatter gore without going overboard, and while some people may find the show “gross,” I thought the graphic nature of the violence was just right – not gratuitous, but also not hiding things unnecessarily. I also found the theme music composed by Ramin Djawadi, which played over the opening credits, to be terrific, and one of my favourite tracks for a television show in recent memory.

So that’s it for The Strain. Overall, it’s pretty good, but it doesn’t quite hit the ranks of one of the all-time great horror series. It does have an interesting concept, great characters, and at least for the first two seasons (and most of season 3), a compelling narrative.  Unfortunately, it’s all blow to hell at the end of season 3 and doesn’t quite recover.