A much-belated big-screen feature film of the 1960’s animated sitcom from Universal Pictures, The Jetsons: The Movie came out the same year that Universal distributed Darkman and Tremors, amongst other pictures, and so it feels very much behind the times in more ways than a few.

George Jetson is picked for a job that a dummy can do, but he manages to screw it up … except there’s a catch.

George Jetson (voiced by Jeff Bergman) is picked by his boss Mr. Spacely (also voiced by Bergman) to become the “vice president” of the company, complete with a raise and relocation to an asteroid, where his new job awaits him: the button-presser that turns on an assembly line that produces metal parts. What George doesn’t know is a lot: He’s a patsy, and was chosen because of how dumb and unreliable he is, but since his entire job consists of simply pressing a button, Mr. Spacely thinks he’s chosen the right moron, except George is only the latest in a long line of patsies to be chosen for this exact job, and every one of the previous button-pressers failed due to some sort of malfunction or sabotage on the assembly line on the asteroid. After George relocates his entire family (his wife, teenaged daughter, son, a dog, and a robot housekeeper) to the distant asteroid, he’s got a lot to deal with what with his disgruntled daughter, whose social life is shattered as a result, and his lamenting wife who has to start all over after building up the life she’d built up in the city, and so when his seemingly simple job falls apart thanks to sabotage, he and his family have to very quickly figure out who – or what (or why) – the factory is under attack. Turns out the problem comes in the form of little Ewok-type creatures native to the asteroid whose home is being destroyed, no thanks to the factory, and so George has to help the natives survive, while also somehow keeping his job.

A much-belated big-screen feature film of the 1960’s animated sitcom from Universal Pictures, The Jetsons: The Movie came out the same year that Universal distributed Darkman and Tremors, amongst other pictures, and so it feels very much behind the times in more ways than a few. For one, the story isn’t very compelling, and the movie has a difficult time obtaining crossover appeal for both adults who grew up with the show, and kids, who might likely be bored by the movie. Producers / directors William Hanna and Joseph Barbera, who were stalwarts in the animation world, made this film, and they added a bunch of pop songs and incorporated them into the story, almost to the point of becoming a musical, and it’s distracting, even for an 82-minute movie. They experimented with CGI, and it’s of interest for animation aficionados in that regard, but there’s nothing special of notable about any of the character designs or layouts. Everything looks like a Saturday morning cartoon (aside from the few moments of CGI) from that era (think She-Ra), and so the movie really doesn’t lend itself to a feature film format. If you’re a fan of The Jetsons, this movie will obviously hold more interest for you, but all others may be bored by it. It astonishes me that Universal released this in 1990.

Kino Lorber’s new Blu-ray release of The Jetsons presents the film in high definition for the first time, and it comes with a new audio commentary by a film historian, as well as a new audio interview with voice actor Bergman, and the trailer. 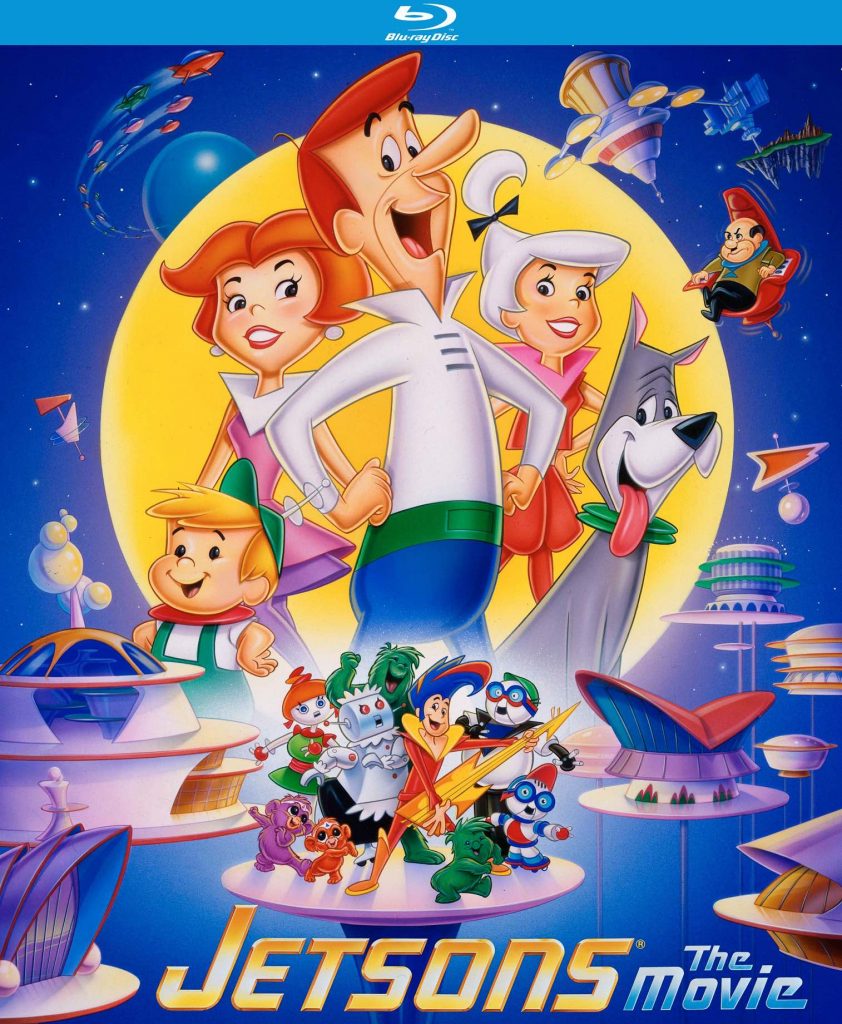