Both films are definitely fun for fans of old monster / creature films, especially for the old Universal Monster movies.

Two scientists are working on different invisibility serums while also competing for the hand of a notable scientist’s daughter, leading to the worst sort of competition that ends in crime and tragedy.

A notable scientist named Dr. Nakazato (Ryunosuke Tsukigata) has invented an invisibility serum, unbeknownst to his two assistants Segi (Daijiro Natskawa) and Kurokawa (Kanji Kashiba) who both are trying to impress their superior so that they can ask for the good doctor’s permission to marry his daughter Machiko (Chizuru Kitagawa). Nakazato’s serum is stolen by a shady businessman who tests the serum on a two-bit thief in the hopes that he can steal a valuable bejeweled necklace for him, which is a big mistake because the serum – once taken – is irreversible. The invisible thief goes on a crime spree and terrorizes the area, and the serum slowly but surely renders anyone who takes it unstable and crazed. A manhunt is declared, but how on earth will the “invisible” man (who usually walks around wrapped up like a trench coated mummy) be captured?

A clear and blatant riff on the Universal Monster film with Claude Raines, The Invisible Man Appears relies on some of the same techniques to convey the effects of an invisible character. It feels like a spin-off or a sequel to the American film, and for that reason the movie is of particular interest, despite being a little on the rickety side. It’s fun to a degree, and if you have any interest whatsoever in the old “monster” movies that Universal made, this Japanese version from director Nobuo Adachi should hit the spot.

An assassin reduced to the size of a fly goes on a killing spree, and an invisible scientist might be the only one who can stop him.

A businessman with a long-held grudge against those who’ve wronged him in his life makes a deal with an assassin: He will reduce the man’s size and weight so that he can become the size of a fly (and can float!) and provide him with an addictive narcotic that he will come to depend on in exchange for a slew of murders. The businessman has a history of wartime crimes and did time on a remote penal colony, and now that he has full control of his dastardly experiments, he intends on an elaborate revenge, but he didn’t count on an unstable assassin who goes on his own personal vendetta on anyone who gets the attention of a saucy cabaret dancer he has eyes for. Soon, the city is plunged into a state of panic when people report hearing a “buzzing” sound just before the victims were killed, leading to the assumption that there are killer flies on the loose, only the murders were committed with a knife. Meanwhile, anther scientist has perfected the use of an invisibility ray, with hopes to use it for police purposes (for “stakeouts”), and the police have no way of trapping the human fly assassin unless they get creative, which is fortuitous, as there’s an invisible man out there too.

A cross-pollination of creatures / monsters helps The Invisible Man vs The Human Fly stay somewhat interesting, but its logic is for the birds. Sometimes the human fly guy is the size and height of a fire hydrant, while other times he’s a tiny little insect, and then he can become big seemingly at will. Also, he doesn’t fly, but sort of hovers and can control his aerial maneuverability. The invisible man stuff is sidelined and gets murky too with funky explanations (his flesh is visible, but his clothes aren’t, which makes him invisible), but it’s still sort of entertaining. If you’re an invisible man aficionado (who isn’t?!), then this one is a must. From director Mitsuo Murayama.

Arrow Video has just released these two titles onto a single disc as a double feature, and while both transfers are the best they possibly can be due to the fragility of the negatives, they retain some creakiness of their age. These films have never been available before in the USA, and so it’s a treat to see them for the first time. Special features include a new interview with a film critic, an image gallery, a trailer, and newly commissioned reversible artwork for both films by artist Graham Humphreys. 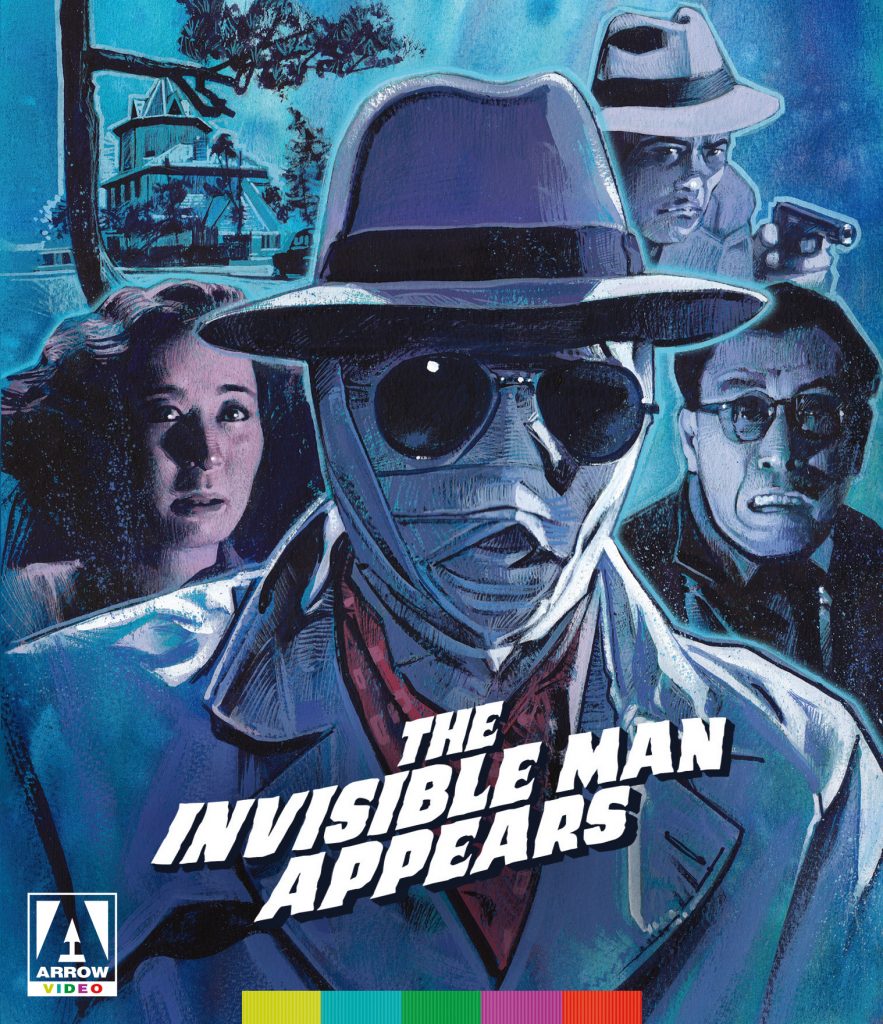