A sheer epic of production design and convincing performances, particularly by Chaney who completely immerses himself in heavy makeup and costume, the original silent version of The Hunchback of Notre Dame well and truly sets a high bar and standard from which to follow.

Plot: A half-blind and deaf hunchback man falls in love with a gypsy woman, but must contend with her suitor – and all of Paris – for her.

Review: High above the alcoves and gothic gargoyles of the Notre Dame cathedral lives a half-blind, deaf and deformed hunchbacked man named Quasimodo (Lon Chaney in a career-defining performance). He looks down and mocks the people of Paris, who have no idea he exists, until a citywide celebration called the Court of Fools takes place. He is lured down and used as a pawn by Jehan, the brother of the archdeacon, to stage a kidnapping of a young gypsy girl named Esmerelda (Patsy Ruth Miller) to make it look convincing so that Jehan can rescue her and appeal to her, but Quasimodo has no idea that he’s been set up to be tortured in the middle of the city in front of all in Paris. The plan backfires: Esmerelda takes pity on the hunchback and scorns Jehan, and Quasimodo is forever in thrall of her. Later, when she falls for a captain of the guards, a strapping man named Phoebus, Jehan’s lust for Esmerelda burns so fervently that he frames her for the murder of Phoebus, but it’s all a ruse to make her beg for mercy so that Jehan can whisk her away in his twisted benevolence. Ever in the foreground is Quasimodo, who saves Esmerelda from a lynching, and when he takes her to the top of Notre Dame, he essentially traps them there as the people of Paris stage a violent siege on the cathedral, forcing the hunchback to fight back by throwing beams of wood and molten steel down to the crowd below.

A sheer epic of production design and convincing performances, particularly by Chaney who completely immerses himself in heavy makeup and costume, the original silent version of The Hunchback of Notre Dame well and truly sets a high bar and standard from which to follow. The scale of the sets is immense, as are the massive crowds and high-wire stunts by Chaney (or his stunt double Joe Bonomo), who deftly maneuvers up and down the cathedral gargoyles and ropes. It’s an impressive film, and for its time it must have been a stunning thing to see on a big screen. It looks so vividly real and authentic, and it’s a remarkable achievement of movie making. Directed by Wallace Worsley.

Kino Classics has just released a Blu-ray edition of The Hunchback of Notre Dame, and while the film had been in the public domain for many years and various quality editions have been released over the years, this edition does its best to be the definitive edition. While some scenes are pretty scratchy (no fault of Kino’s, but the years and source materials have diminished it), the transfer looks great. Bonus features include an audio commentary by a film critic, a booklet with an essay, a newsreel, a 16mm home video of Lon Chaney, and much more. 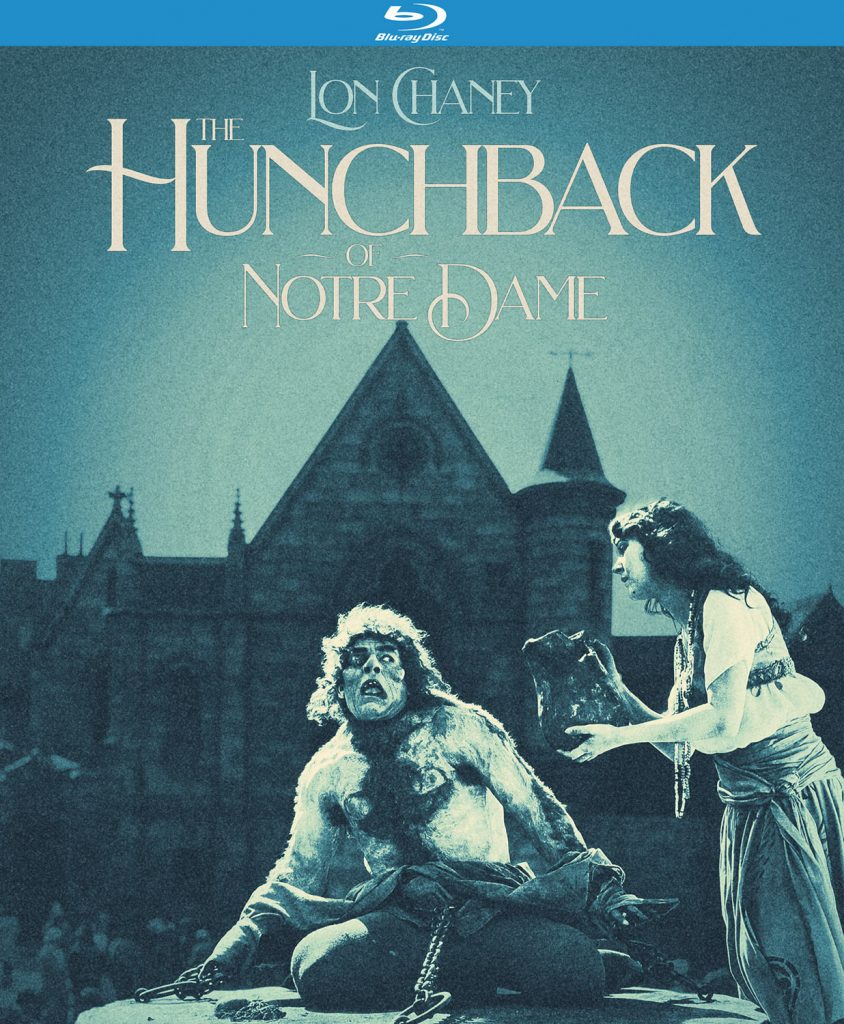