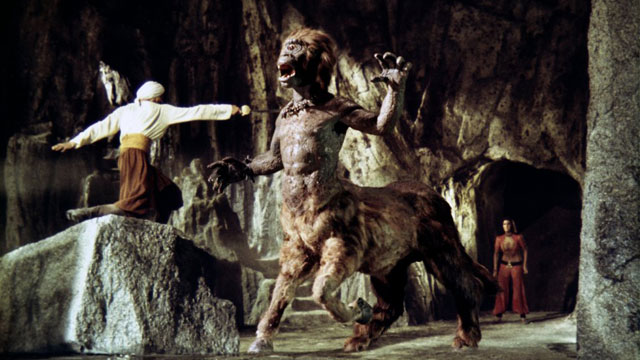 The Golden Voyage of Sinbad (1973) Review

With an extremely likable cast, a great villain and Harryhausen’s fantastic creatures, this is the best of the Columbia Sinbad movies.

Plot: Sinbad searches for the Fountain of Destiny to unite the pieces of an ancient golden puzzle and to stop an evil sorcerer.

Review: I didn’t think any of the other Sinbad movies would top the 7th Voyage of Sinbad, but lo and behold, something did precisely that. The Golden Voyage of Sinbad isn’t as heralded as it’s predecessor, but for my money, it is the better film.

Part of the reason is the cast. I don’t know why, but I really liked John Phillip Law in the title role, and he is the best of the Sinbad’s I’ve seen in the Harryhausen films. He’s just such a likeable and charismatic actor, and even though I found his accent somewhat off the mark for the part, his presence makes up for any flaws. Likewise, Tom Baker is fantastic as the villain Koura; the character becomes increasingly frail throughout the picture, and while the makeup effects were good, Baker’s performance sold the character’s continual breakdown. It’s easy to see why this part landed him the role as the 4th Doctor in Doctor Who.  Sinbad’s crew are also extremely likeable and memorable, with Kurt Christian as the reluctant sailor Haroun standing out – what could have just been a one-dimensional comic relief character becomes a bonafide hero by the picture’s end. Caroline Munro, who is absolutely stunning, does a decent job as the female lead.

Of course, you can’t talk about one of these films without dedicating some space to Harryhausen’s creations. The creatures are absent for part of the film (other than a homunculus whose design is impressive but doesn’t pose much of a threat to the heroes). There is a nice scene where the figurehead on Sinbad’s boat comes to life and attacks the crew – certainly an ingenious idea. However, by the end, Harryhausen pulls out the big guns, including a frickin’ 6-armed Kali statue who wreaks havoc on Sinbad and his men, and an especially impressive fight between a cyclopean centaur and a griffin.  Besides the creatures, the effects factor into the end fight, which certainly looks nice on-screen.

The action is what you expect from one of these flicks – a lot of fights take place between the heroes and Harryhausen’s creations, but the battle between the centaur and griffin was unexpected but welcome, and there is a harrowing escape for Sinbad and his men that was especially tense. The music was bold and heroic, which was a nice accompaniment to the adventuring, and the film was shot well and had some nice set pieces (a standout being the Fountain of Destiny itself, what a great location).

If you choose to see only one Sinbad movie in your life, I would recommend this one. All of the movie-making elements come together in one terrific, entertaining package.