Incredibly surprising and fresh, The Colony resembles a few other notable films that I love and highly recommend in the genre, including Waterworld, No Escape, and Mad Max Beyond Thunderdome, and the production design and cinematography are all way above average.

An astronaut returns to earth after the apocalypse hoping to find an inhabitable world for her colony in space … and finds more than she could have dreamed for.

Generations after humanity left earth to flee from climate change disasters, pandemics, and wars, a pod crashes to earth with two astronauts inside. Years before, another pod cashed, but the astronauts were never heard from again, but now these two young explorers – Blake (Nora Arnezeder) and Tucker (Sope Dirisu) – are hoping to find signs of life and relay back to their space station where everyone is waiting to hear back from them. It is vital that they find signs that earth can be inhabited again because everyone in space has become infertile, and if hope cannot be found, then there is no future for humanity. Blake and Tucker (who is injured in a hard landing) find odd mutated sea species, but they also find much more: Humanity has survived. They are captured by a rag tag colony of survivors who’ve survived living on both land and sea, and after Tucker dies of his injuries, Blake becomes witness to a brutal raid by a stronger, more formidable band of raiders (who also take all her equipment) and she’s captured and taken to a massive stronghold in the middle of a low tide area near the sea. The leader of the stronghold is a man named Gibson (Iain Glen), who used to be an astronaut like her and was part of the first team to land all those years ago. Blake also finds her father – the engineer of the project that helped launch the team – has been kept prisoner in the keep for years for crimes against the greater good. It turns out that the people of the earth are indeed fertile and can procreate, but Gibson is using his power and superior forces (with hi tech equipment and weapons) to keep the indigenous people under control and forces them to procreate under command to perpetuate the human race. When Blake realizes that he’s been killing the indigenous people or kidnapping their women and female children for these purposes, she sides with the indigenous and her father (who was also on their side), and she leads a revolt against Gibson and his forces.

Incredibly surprising and fresh, The Colony resembles a few other notable films that I love and highly recommend in the genre, including Waterworld, No Escape, and Mad Max Beyond Thunderdome, and the production design and cinematography are all way above average. Co-writer and director Tim Fehlbaum – who also did the apocalyptic film Hell – has stepped up his game as a filmmaker and emerges as somewhat of a visionary in terms of what he made here. The film has a highly unusual and unique look, with a misty, sea-faring flavor, and almost the entire movie takes place in waterlogged, low tide seascapes or ships, barges, or boats, but it’s all instantly recognizable as a world where the polar ice caps have melted, and there’s very little (if any) dry land left. What the movie needed was a better score with a more iconic sound, but I can easily give this film my highest recommendation. Rolan Emmerich produced it.

Lionsgate recently released a Blu-ray + digital code edition of The Colony, and it comes with an audio commentary by Fehlbaum and a making-of feature. 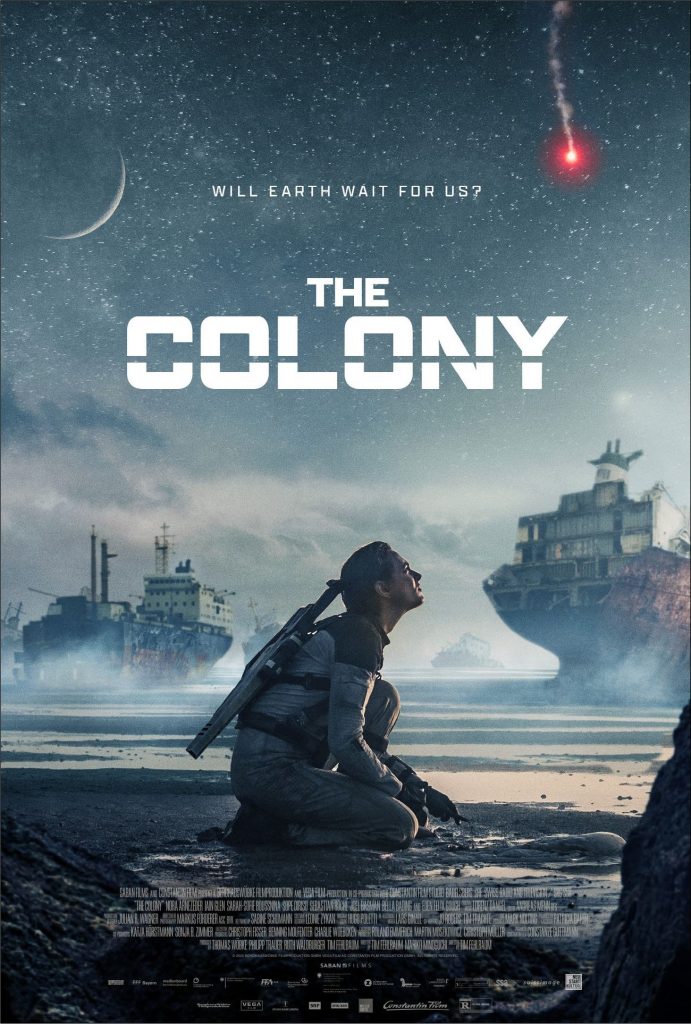