The film evokes a stark coldness and feeling of loneliness that I’ve rarely seen in a movie, but Schrader is a master at evoking that feeling. He’s made an entire career out of studying lonely characters like William Tell, and this film is exactly in tune to that mantra.

An ex-con and former soldier turns to a life of card counting and gambling, but when he encounters a young man seeking vengeance on someone they both know, their lives change forever.

A former soldier named William Tell (Oscar Isaac) lives a life of strict solitude as he drives to casinos around the country, using his unparalleled skill at card counting to always win small stakes poker games wherever he goes. He never stays in town long, leaving as soon as he accrues enough winnings to finance his next trip, slowly building up a nest egg that he can eventually retire on. He learned his skill of card counting when he was in military prison; he was sent away for war crimes and torture, but it was his superior – Gordo (Willem Dafoe) – who deserved the prison sentence, and not him, but he was the scapegoat, and after an extended sentence, he has embarked on this lonely existence of never making friends, having absolutely no ties, and asking for very little in life. His skill at card counting gets the attention of a woman named La Linda (Tiffany Haddish) who specializes is spotting gifted gamblers, and she offers him a chance to be staked in a high profile game in Vegas. He reluctantly accepts, and she sponsors him as they work their way across the country, stopping at casinos along the way to build his reputation. But then William meets someone completely by chance at a walk-in conference at one of the casinos: a young man named Cirk (Tye Sheridan), who seems to know who he is. Cirk’s entire existence seems to be to get revenge on Gordo, who had his father killed years ago, and William sees a rare chance to become a mentor to Cirk, who is in desperate need of guidance. As much self control that William has to reign in his own need for vengeance, he also sees that Cirk could very easily become a loose cannon and destroy his own life if he went up against Gordo without some fine tuning, and as the weeks turn into months, these two develop an uneasy alliance as their destinies seem tied to having one final confrontation with the man who destroyed both of their lives.

From writer / director Paul Schrader, The Card Counter is two movies in one, and it’s an unusual marriage of genres. On the one hand, this is a character study and a glimpse at a counter culture of gambling I’ve never really seen in a movie, and on the other hand, this is a deep, dark tale of revenge the likes of which is so bleak and grim that it hurts to even think about. At the center of it is Oscar Isaac in a tempered and masterfully controlled performance, and the movie works because he’s so good in it. The film evokes a stark coldness and feeling of loneliness that I’ve rarely seen in a movie, but Schrader is a master at evoking that feeling. He’s made an entire career out of studying lonely characters like William Tell, and this film is exactly in tune to that mantra.

The Card Counter is now on Blu-ray from Universal and contains a single bonus feature entitled “A High Stakes World.” A digital code is included. 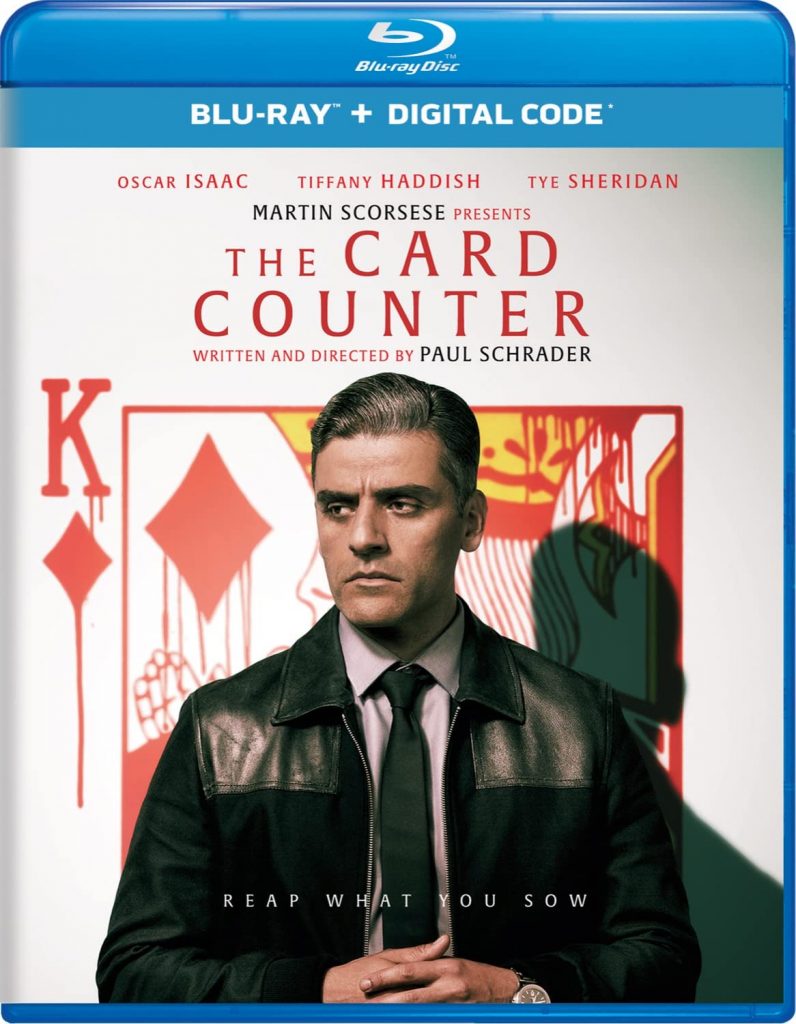