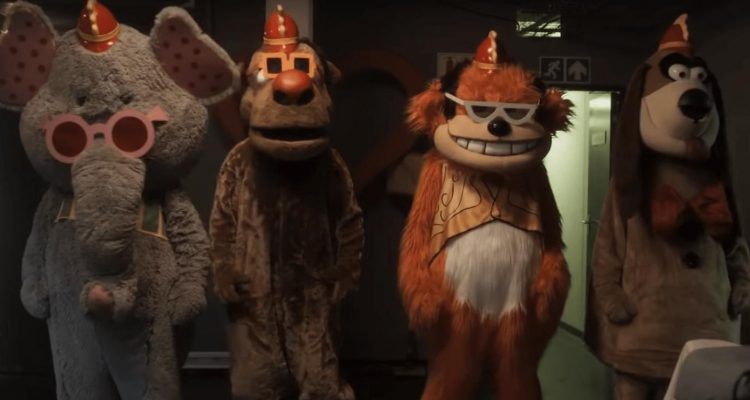 The Banana Splits Movie is the ultimate guilty pleasure that I will happily revisit over the years. It may not be scary but it’s a helluva lot of fun and makes me want to see more old kid’s shows re-imagined as violent slashers…

Plot: A boy named Harley and his family (brother Austin, mother Beth, and father Mitch) attends a taping of The Banana Splits TV show, which is supposed to be a fun-filled birthday for young Harley and business as usual for Rebecca, the producer of the series. But things take an unexpected turn — and the body count quickly rises. Can Harley, his mom and their new pals safely escape?

Review: What kind of a sick monster reimagines a beloved children’s TV show as a violent slasher movie? The best kind, that’s who! If I ever meet director Danishka Esterhazy, I’ll buy her a drink. The Banana Splits Movie has no right to be as entertaining as it is but for some reason it works really well as a horror/comedy movie.

Most kid’s shows are bloody terrifying anyway so to actually go all out into the realms of horror with The Banana Splits Movie was a bold move that surprisingly makes sense. Youngsters today wouldn’t remember The Banana Splits but I am of that vintage and seeing them hack and slash their way through this movie had me smiling from beginning to end.

For the most part the acting is pretty decent with Finlay Wojtak-Hissong proving a sympathetic lead and never an annoying kid as he so easily could have been. His mother Beth (Dani Kind) is a little over-protective of her offspring after her husband died in a tragic accident (understandable) but when her son’s heroes The Banana Splits find out their show has been cancelled they turn into killing machines while she quickly transforms into Sarah Connor and kicks ass to protect her kids. Her husband is a bit of a one note douchebag but that just makes the movie’s events even more satisfying.

I like the amount of practical effects that are used and kudos for coming up with some hilariously imaginative kills; this is basically Itchy & Scratchy: The Movie and is the type of slasher flick I love. It won’t win prizes for originality and it isn’t remotely scary but I’d be lying if I didn’t find this raucously entertaining.

Overall, The Banana Splits Movie  is a blood soaked riot with some impressive kills and a high bodycount; it’s open for a sequel and I’d be happy to sign up for that. Now sing along with me: Tra la la la la la la…