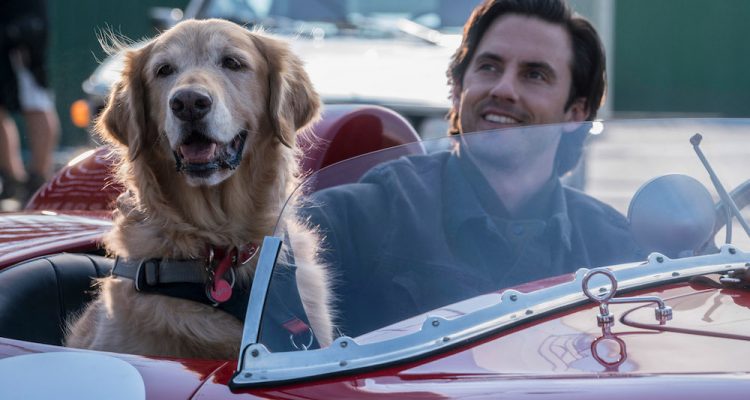 L-R: “Enzo” and Milo Ventimiglia in Twentieth Century Fox’s, THE ART OF RACING IN THE RAIN

An emotionally satisfying film filled with moments of tragedy and hope – guaranteed to leave you in tears.

Plot: Definitely bring your tissues for this one. The Art of Racing in the Rain is an emotional film that explores humanity through the eyes of a dog. Voiced by Kevin Costner, Enzo has been with his owner Denny (Milo Ventimiglia) since his puppy years—never leaving his side, even as he begins to take a backseat in Denny’s life through the years.

Review: To say this film is just another sappy dog film doesn’t do it justice. The Art of Racing in the Rain is a love letter to humanity—the good, the bad, and the ugly. We see this from the very start, through Enzo’s relationship with his owner Denny. An aspiring Formula One racer, Denny’s (and Enzo’s) passion for racing develops beautifully on screen. Their bond is all sunshine, cars, and smiles—until Eve (Amanda Seyfried) comes into the picture and shows Denny a completely different kind of love.

Costner’s rugged, raspy voice could’ve gone both ways as the loveable family dog, but instead his delivery was comedic and reflective. Enzo’s commentary, often deadpanned and sarcastic, provided the lightheartedness this movie desperately needed.

Ventimiglia plays Enzo’s owner with such unsurprising ease, echoing his role from NBC’s hit show, This is Us. Like Jack, Denny is a family man who loves fiercely and fights for the three things that matter most in his life – his wife, his daughter, and Enzo. Obstacle after obstacle, Denny is hit with so much tragedy, much more than the average man should ever have to go through. Still he persists, and even when he cannot, it is Enzo that persists for him. The bond between man and dog is so genuine and inspiring, which is such a treat getting to see their relationship shine through.

Overall, The Art of Racing in the Rain is a special story that will undoubtedly tug at your heartstrings. It contains just enough heartbreak and just enough hope to feel well and truly satisfied by the end of it all. As viewers, we get to witness firsthand how humanity is devastatingly beautiful and endless and everywhere; you just have to look hard enough to find it—or in Enzo’s case, until it finds you.