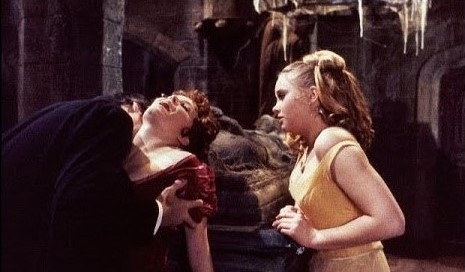 Taste the Blood of Dracula (1970) Review

While Christopher Lee is as mesmerizing as always, this Hammer flick lacks interesting main characters, and the ending was just lame.

Plot: After Dracula is brought back to life by one of his disciples, he seeks revenge on the three men who killed his servant.

Review: There is an inherent watchability to the Hammer horror films; they are without a doubt extraordinarily stylish and bring a visual flair to the screen. Their colours pop, and the moody gothic atmosphere of the various crypts and tombs that you find in a Dracula movie are effective. That being said, mood, atmosphere and style can only carry you so far.

Taste the Blood of Dracula is a direct sequel to Dracula Has Risen from the Grave, and like most sequels, they pale to the original. It takes 45 minutes for Dracula to make an appearance, leaving us in the company of three wealthy gentlemen who like to partake in the extremes of London Victorian Society. While two of the characters are tolerable, I absolutely cannot stand the Hargood character played by Geoffrey Keen (he of 007 fame – he played the British Defence Minister in 6 Bond films). I don’t know if Keen was just pissed off being in the role or it was the directing or how the character was written (or all three), but he is, without a doubt, the most unlikeable character I’ve seen in a Hammer film. He goes too far in his treatment of his wife and daughter & is a drunk and a snob. His inevitable end in the movie doesn’t come quickly enough.

Christopher Lee is back as Dracula in this one, and as always, his presence and mannerisms are fantastic. The lone exception is the ending, where Lee must have thought he was in a comedy, as his acting was ridiculously hammy in portraying Dracula’s demise. Otherwise, he is terrific, as always.

I will say, the ending to this one had me scratching my head. Dracula dies…after realizing he’s in a church. Mind you, when he does finally appear on the screen, he’s in the church pretty much the entire film, so I find it odd that it took him that long to look around and go, “Hey, I’m in a church, this isn’t good.” True, a lot of the religious iconography and trappings were covered up by his disciple when he was revived in this flick, so when the main good guy uncovers it all, I’m guessing it wasn’t great for the Count; still, it seems a pretty lame reason to dissolve Dracula back to red dust.

I also didn’t find any of the characters outside of Dracula particularly interesting. 70s sex kitten Linda Hayden tries her best, but I find her kind of bland, and the main hero, played by Anthony Corlan, is really nothing to write home about. They try a whole Romeo and Juliet thing with Hayden and Corlan’s characters, but it doesn’t register, and they don’t have much in the way of chemistry together. Isla Blair is Dracula’s token victim who gets turned into a vampire, and Martin Jarvis as her hapless fiancée, are equally colourless. Secondary players like Michael Ripper, Russell Hunter, Ralph Bates, and Roy Kinnear shine in their limited roles, but the leading hero players aren’t up to par.

The soundtrack, like most Hammer films I’ve seen, suitably accompanies the action on the screen. I like the orchestral themes that seemed to be a staple of the Hammer films, as it adds to the moodiness of the environment. And like I said, like most Hammer films, this one has some lovely sets and a great general mood to the settings (even if they have a habit of shooting night scenes during the day).

Overall, this film is okay, and there’s a certain charm to it (and the scene in the brothel stands out as a memorable sequence), but I think it’s a step down from some of the genuinely excellent Hammer horror films that preceded it.