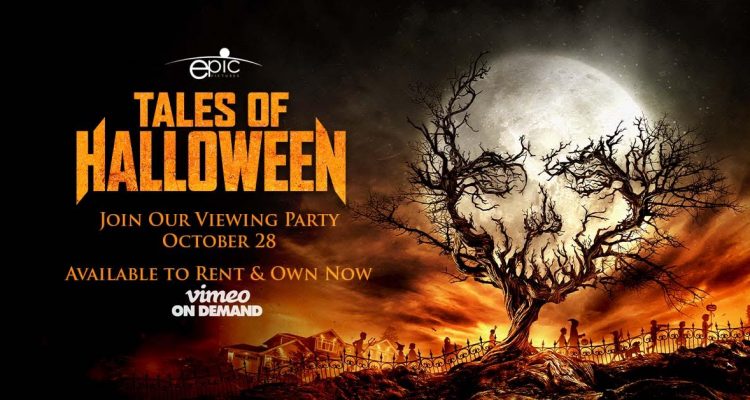 Tales of Halloween is an entertaining horror anthology so if you see it on Blu-ray you should pick it up ASAP as quantities are limited.

Plot: Ten stories are woven together by their shared theme of Halloween night in an American suburb, where ghouls, imps, aliens and axe murderers appear for one night only to terrorize unsuspecting residents.

Review: Slowly but surely, the anthology horror film has crept back into the fore with notable films such as the VHS trilogy, the two ABCs of Death films, and other odds and ends like the two All Hallow’s Eve flicks, A Christmas Horror Story, and Southbound. Perhaps the most prominent of the recent crop of horror anthology films is 2015’s humdinger Tales of Halloween, a loosely connected ditty from 11 different filmmakers, all set on the same Halloween night. The project is a bold experiment, and like any set of short films it doesn’t always succeed in its individual parts, but as a whole it’s bound to become a perennial favorite for many viewers because some of the films contained therein are home runs.

The stellar, stand-out shorts come from eclectic filmmakers Lucky McKee (who made May, The Woman, and All the Cheerleaders Must Die), Darren Lynn Bousman (whose film Repo! The Genetic Opera is close to being a classic), and Neil Marshall (the director of Doomsday, The Descent, and Centurion). McKee’s short piece “Ding Dong” is an indescribably awesome doozy about a witch (played by Polyanna McIntosh), while Bousman’s tale “The Night Billy Raised Hell” has a little boy accompanying the Devil himself (played by Barry Bostwick) through town on Halloween, and Marshall’s piece “Bad Seed” is the show stopping closer of the film, and it concerns the biggest, baddest pumpkin of all time.

The weaker shorts are “Trick” from director Adam Gierasch and “This Means War” from filmmakers Andrew Kasch and John Skipp, and the rest of the mini-features are good filler for an otherwise tasty treat of an ensemble.

Epic Pictures has just released an incredible four-disc set collection for Tales of Halloween. In addition to the Blu-ray feature, there’s also a DVD version of the film, as well as the soundtrack CD to the movie, and a bonus disc with tons of extra features, including bonus short films from the likes of Neil Marshall (a fun early movie he made in the early ’90s), Lucky McKee, and Mike Mendez. Also in the special features are a lot of bonus scenes, deleted scenes, and everything else you can think of. This release is perhaps one of the best and most lovingly produced of this Halloween season, and the only place to grab one is on the film’s website. Purchase one before it goes out of print.