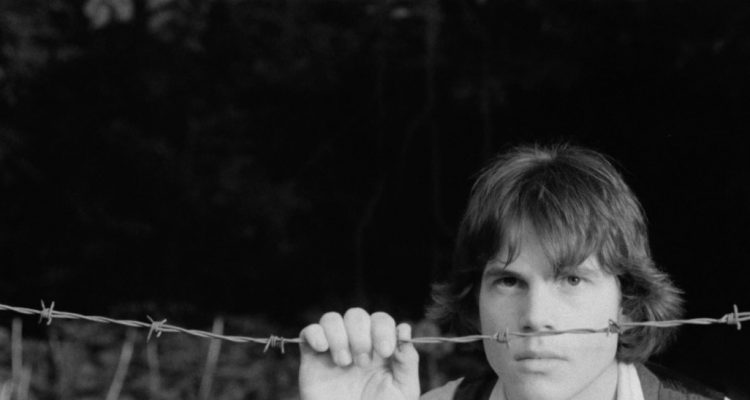 This movie will be an acquired taste, but as a “lost” relic of both the 70s and an early example of the budding career of Bill Paxton, the historical and cultural significance of the film cannot be readily ignored.

Plot: In a dystopian future, Europe is unified under a totalitarian patriarchy, where each town is assigned a single economic purpose. In Brendovery, Wales the occupation is prostitution. Arriving by train from London is Billy Hampton, a young American expatriate and draft evader (Bill Paxton in his first lead role), ostensibly there to enjoy a sex-filled holiday. Unknown to him he is a time bomb assassin, programmed by a feminist terrorist cell to assassinate the local minister of prostitution.

Review: In the myriad layers of cultural, political, and social subtext that build the often jarring and surreal story of Taking Tiger Mountain Revisited, its difficult to contrive the exact meaning the directors, Tom Huckabee and Kent Smith, were hoping to relay to the audience when they set out to create this film. Perhaps that ambiguity was exactly what the directors had in mind. The world of Taking Tiger Mountain Revisited is reminiscent of the dystopian societies of such works as Orwell’s Nineteen Eighty-Four, Huxley’s Brave New World, and Burroughs’s Blade Runner (in which partially inspired the film’s script). Europe is controlled by an Authoritative, highly patriarchal government that has transformed various industries into compartmentalized townships where the single focus of their inhabitants are on one specific industry the government has assigned to them. The plot itself follows an American draft dodger, Billy Hampton (portrayed by Bill Paxton in one of his first onscreen roles), a sort of Manchurian candidate for a secretive militant feminist faction of scientists that plan on using Billy as their unwitting assassin to kill the minister of prostitution in Brendovery, Wales. Prostitution, of course, being the sole industry of the town.

The beginning of the film portrays a conversation amongst the feminist scientists as they discuss in cold, clinical dialogue about the various brainwashing techniques and surgical procedures they have forced Billy to undergo to prepare him for his mission. The juxtaposition of shots and footage of Billy undergoing various intimate and mundane activities nude to the scientist discussing the horrific acts they’ve done to transform Billy into an unconscious killer is jarring to watch. As the viewer sees a nude and exposed Billy on screen, the viewer is also told through the scientists’ discussion of how they have stripped Billy’s psyche and body down and rebuilt him into a suitable servant for their cause. As Billy is unaware of what has transpired, he believes his trip to Brendovery will be a vacation of sorts full of casual sex romps throughout the brothels that litter the town. Upon arriving to Brendovery, Billy’s world becomes overwritten by bizarre and surreal dreams melding sexual encounters with prostitutes to strange images that often seems unrelated to his mission.

The soundtrack of the film, if you can call it that, is an endless stream of radio broadcasts from governmental sources that often seem to be subliminally filling in the current events of the world. A passive world building in the film that explains events happening around Billy as he moves forward with his strange encounters with the townsfolks of Brendovery.  The film itself is very much the child of the 60s and 70s counterculture, where the major enemies of society were perceived to be the government and the patriarchal nature of how governments were treating their respective populations. Its not surprising that the film portrays feminists as terrorists seeking to undermine this authoritative system of government that controls the world in which the film exists in. Billy himself, an instrument of the feminist terrorists, is entangled in this attempted usurping of the patriarchal system. His very nature is used as the controlling factor to manipulate him into committing his assassination mission.

It’s nearly impossible to watch Taking Tiger Mountain Revisited without noticing the emerging talent of Bill Paxton. His portrayal of Billy Hampton draws the viewer into the strange and often confusing world that Billy inhabits.  His attempts to interact with the bizarre denizens of Brendovery while dealing with the repercussions of his damaged psyche due to horrific procedures inflicted upon him leaves the viewer just as confused as poor Billy himself about the nature of the reality he exists in.  The nightmarish overflow from his dreams into reality while his unconscious mind suffers from brainwashing leaves both Billy and the viewer’s perceptions at best unreliable and at worst irreconcilable. It’s a shame that the film fell into obscurity upon its initial release as it seems a perfect example of the bizarre, esoteric cinema that emerged in the 70s. It fits right at home among such films as El Topo, Black Moon, Wedding Trough, and Eraserhead. The film’s ambiguity and startling imagery evokes a myriad of feelings and ideas that are hard to categorize, much like the film itself. Whatever the true purpose behind the film was, only the directors and writers of the film truly know. The film is certainly not for everyone, but as a “lost” relic of both the 70s and an early example of the budding career of Bill Paxton, the historical and cultural significance of the film cannot be readily ignored.