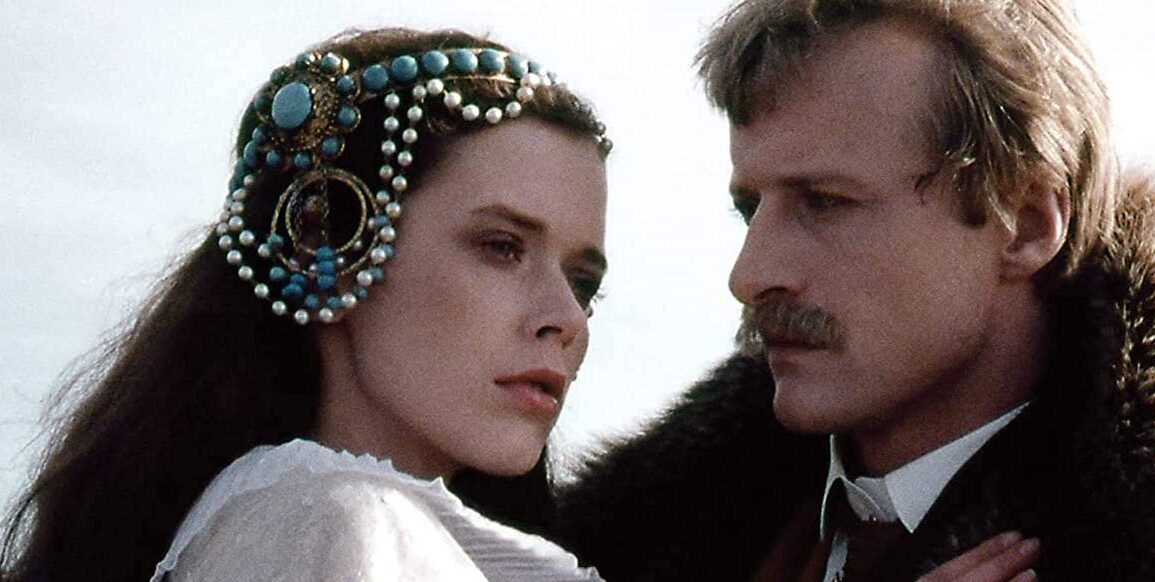 Sylvia Kristel fans – and fans of Rutger Hauer (who appears in two out of the four titles presented here)  – will be rewarded with four rich films of varying degree of quality in this collection. The transfers by Cult Epics are striking and strong. Plenty of special features to peruse for hours.

A kidnapping plot goes sideways when the father of the intended victim – a teenaged girl – sends her to a bordello for “safety.”

A sinister kidnapping ring orchestrates a wildly lopsided snatching of a beautiful young woman (played by Christine Boisson) about to get on a train, and they send a ransom note to the girl’s father, a wealthy banker, cum writer, named Georges (Phillip Noiret), who is perplexed by the ransom note because his daughter Carolina (Anicee Alvina) is safe in her room in their home. It’s obvious that the kidnappers have notified the wrong father, but Georges concocts a wild and seemingly unnecessary plan: To dupe the kidnappers by pretending to go along with the ransom anyway, but first he has to “protect” his daughter Carolina by acting as though she’s under threat of being kidnapped. He sends a private detective to take Carolina to a safe place, which turns out not to be safe at all, but a domicile of unspeakable perversions: A high-end bordello where clients pay exorbitant sums of money to do whatever they want to kidnapped young women, including cannibalizing them if they so desire. Carolina, who’s all but been abandoned by her father, is inducted into a world of secret perversions as she witnesses what goes on in the mansion, and she even takes on a few men who delight in her youthful beauty … including a man who looks just like her father (and is played by Noiret too)! As the kidnappers continue to snatch young women and throw them into sexual slavery for goodness-knows-what kind of perversions they’ll end up facing, Carolina’s fate teeters on the cusp of oblivion if her father’s insane plan doesn’t congeal into something that actually makes sense.

A farcical, borderline spoof of erotic films in the vein of some of Jess Franco’s sexier efforts (Eugenie and Justine come to mind), Playing With Fire from director Alain Robbe-Grillet is trying to say something amidst its incredible amount of nudity, depravity, and degradation, but he’s also in the business of winking and nudging to his audience, who might not be so inclined to understand just what the heck his endgame is. The movie sometimes behaves like a screwball comedy, but then there are other times when it feels like a Marque de Sade descent into a sexual inferno that has no outlet. It certainly has some eyebrow raising sexuality (a quick but shocking scene of bestiality might stun you), but this movie’s real intent doesn’t seem to shock, but to confound and somehow (I’m not exactly sure how) amuse you. Dutch erotic film icon Sylvia Kristel appears at more than the one-hour mark for a few scenes of sexual degradation and humiliation as one of several beautiful young women who are kidnapped, raped, and degraded. Her scenes don’t particularly add to the nuance or thrust of the film, but her fans might be interested to see her in a smallish role in it.

A virginal teenaged boy on the cusp of manhood struggles to lose his virginity, despite plenty of opportunities.

While on a train ride to the countryside to visit his father during a school break, handsome teenager Pauli (or Patrick, according to the subtitles of the film, played by Ekkehardt Belle) takes a seat in a car with a beautiful, sleeping blonde woman (played by Teri Tordai) and gets a good eyeful of her. Clearly, Pauli thinks he’s found the woman he’s going to deflower himself with, but then another guy comes in and sits down next to him, and when the woman wakes up, the more mature fellow seizes his opportunity and follows her to the bathroom where they engage in some carnal knowledge. Pauli’s been skunked! When the train pulls into the station, his father Ralph (Jean-Claude Boullion) is there waiting for him … and his girlfriend Yvonne, who happens to be the blonde lady who just had sex with a stranger! Knowing what kind of woman Yvonne is, Pauli is crushed when he realizes he’s going to have a difficult holiday with virtually no chance of getting laid, but then he meets a really cute young lady in a bikini lounging around the river, the virginal beauty Julia (Sylvia Kristel). Maybe Pauli is going to have his chance with her, but then he’s perplexed that she won’t give in to his (rather intense, if you ask me) advances. His fat, unattractive buddy has a better chance of getting laid with Julia than he does because sometimes that’s just the way it goes, but when that crisis is averted, Pauli realizes that his biggest threat and competition for Julia’s virginity is his own dad, who seizes on the chance to deflower her when he takes Pauli, Yvonne, and Julia on an excursion to Italy. When Pauli is skunked again, Yvonne takes pity on him and gives him his shot in bed … which doesn’t quite go the way Pauli hopes or expects.

A goofball sex comedy with some real sting in its funny bone, the German-language Julia is a bit of an earthy coming of age film in the vein of plenty of others that followed suit through the years, namely the Israeli Lemon Popsicle series, which were adapted into an English language film called The Last American Virgin for Cannon in the early 1980’s. Julia behaves very much like an immature comedy with only one thing on its agenda, and it has plenty of that to spare through its short runtime of less than 90 minutes. It never finds its sweet spot, though, and only concerns itself with its protagonist’s agenda, never bothering to find its heart or soul. It would much rather dwell in its drunken, carousing, and horny mentality and stretch itself thin, trying to get a chuckle rather than a cheer. Kristel’s character – along with Belle’s – aren’t especially vividly conveyed no thanks to a thin script and only half-interested direction by director Sigi Rothemund, but fans of Kristel will be delighted by her youthful and energetic performance. She was quite beautiful in this junky effort, and she’s easily the best thing about it. 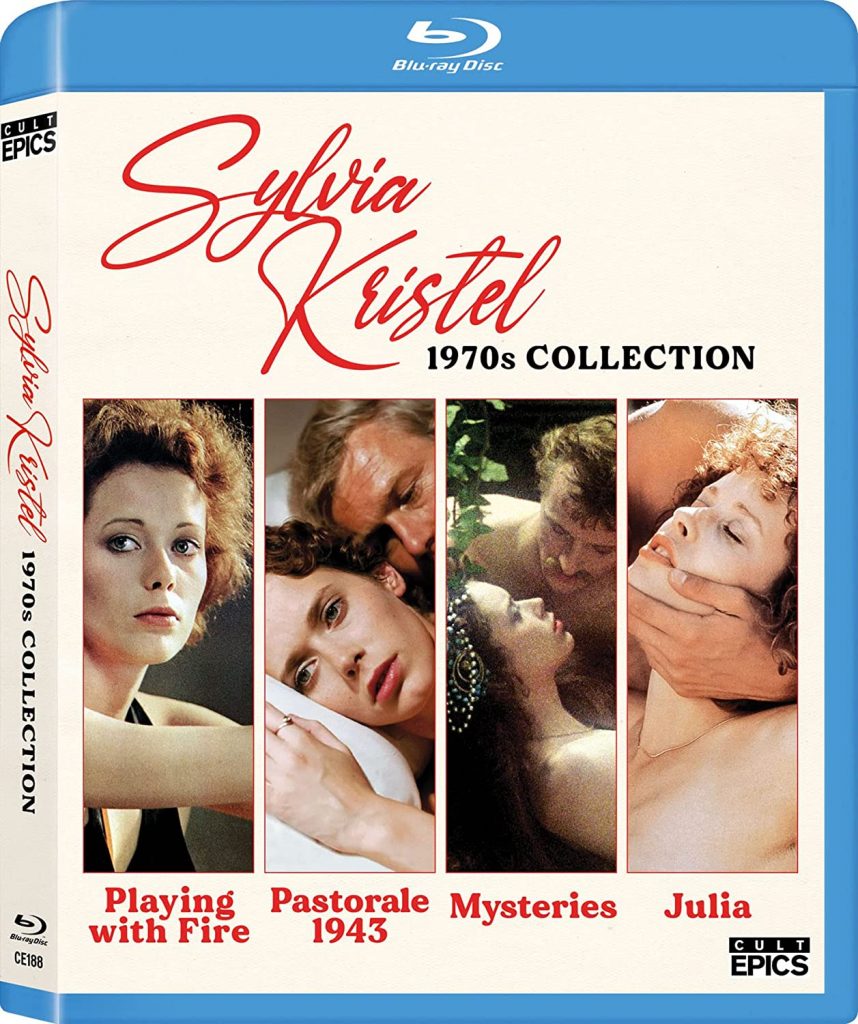 A wealthy and cultured violinist moves to an island town for an extended stay and he becomes infatuated with a beautiful, but unattainable woman.

A cultured and wealthy violinist named Johan (Rutger Hauer, quite dapper) arrives at a chilly and misty coastal island town for an extended visit, and he announces himself with some pomp and circumstance. The village welcomes him in the best way that he can, and even with his sense of superiority and wealth, he finds himself at a distinct disadvantage when he is out walking one morning and he bumps into a beautiful young woman (played by Sylvia Kristel) who barely regards him or gives him the time of day. This infuriates him, but intrigues him to no end, and because he’s not used to such behavior from women he finds attractive, he sets out in trying to locate her again and to find out more about this alluring lady. He befriends the town outcast, a dwarf everyone called Minute (David Rappaport), whom he saves from complete humiliation at a tavern one night, and because of this one act of kindness, Minute declares himself Johan’s friend and sidekick from that moment onward. But Johan is not an especially pleasant fellow, and he reveals himself to be just as cruel as anyone else on the island, and he ends up treating Minute like garbage soon after, but it is Minute who informs him of the identity of the woman of Johan’s interest: She is Dany, and she is planning to marry another man, but this doesn’t stop Johan from pursuing her with everything he has, and soon he becomes transfixed by her seemingly unattainable qualities. He fantasizes about her, and pines for her in ways he never thought possible, and it’s almost as though the more unattainable she becomes to him, the more he falls in love with her, despite how indifferent she is to him. He takes on another lover in town, but she’s nothing compared Dany, and when Minute realizes that Dany and Johan’s lover are working together to dash Johan’s hopes forever, Minute takes it upon himself to get some poetic justice for the way they treat Johan, but by then Johan’s fate will be sealed.

A haunting, dreamlike quality permeates the hazy Mysteries like a romantic flu virus, and the film’s melodramatic approach to love and obsession is somehow perfectly captured in its cinematography and direction (by director Paul de Lussanet). This is most certainly a showcase for Rutger Hauer rather than it is for Sylvia Kristel, although Kristel does drift in and out of the film in a supporting capacity. Hauer really gives the film his all, and he delivers an entrancing, almost hypnotized performance here. The film never reaches any specific erotic heights in the way one might expect, but instead goes for a dreamy, quasi-languid approach to sex, obsession, loneliness, and disparity, which suits the film better than if it had gone in another direction. I’d seen this film once before on VHS (which I still own in its clamshell covering), but watching it in high definition really defines the film much better with its stark visuals and indelible, drunken misty sheen that wraps itself around its cold, chilly heart.

In Holland, the Nazi party is overrunning the country, and a small resistance group is working against it.

By 1943, Hitler’s philosophies and writings have swept the nation of Holland, and the Nazi party has encroached the country. The Dutch are expected to behave as Nazis, turning over Jews, squashing any rebellion, and moving forward into a brave, bold, and all-new future where Hitler will be its leader. A small, but burgeoning resistance group is flourishing in the underground, and one of their leaders is a German-descended schoolteacher named Johan Schults (Frederik de Groot), who is dating an attractive fellow schoolteacher (played by Sylvia Kristel) who shares some of his beliefs. Sympathetic to the Jews and against the Nazi party, Schults and his compatriots carry on their underground activities but fail completely and utterly to maintain secrecy, as one of their members yammers off with a pretty German-sympathizing spy, who rats him out, has him arrested. The man is tortured, and thusly squeals on his members, which begins a systematic process where the underground is infiltrated, whittled down, and eventually squashed. Executed one by one, the underground is undone, until at last only Schultz remains, but he’s the only lucky one, as his brother (played by Rutger Hauer in a brief, but memorable cameo) has become a powerful SS officer, who helps bury his brother’s identity as a dissident.

Slow moving and rather episodic in its lethargic approach to an epic story that feels, more or less, to be based on some facts, Pastorale 1943 has some solid, if indistinct, performances from its leads, and director Wim Verstappen’s style is a little stoic and emotionally removed from the subject matter, no matter how vivid he tries making some of the violence and sexuality on screen seem. Fans of Sylvia Kristel may be a little disappointed with how brief her screen time is in the film, but Rutger Hauer completists will be rewarded with his cameo at the end. This was also notable for having future Dutch star Renee Soutendijk in her debut performance. 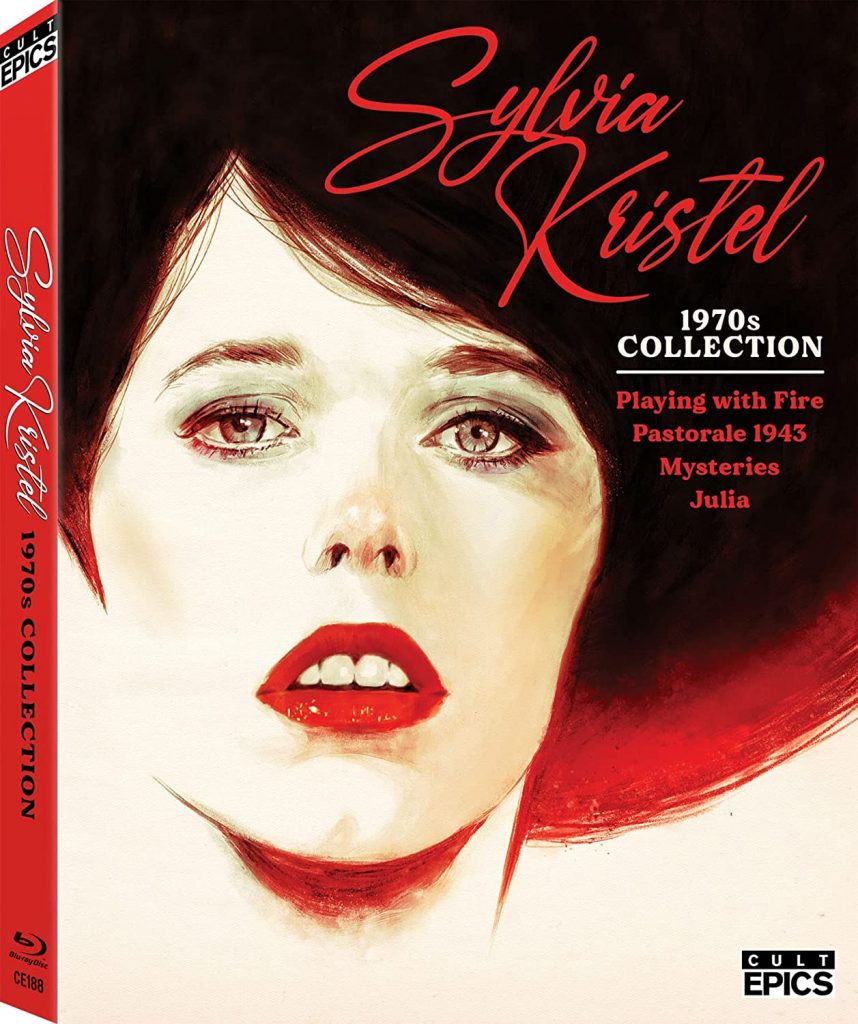