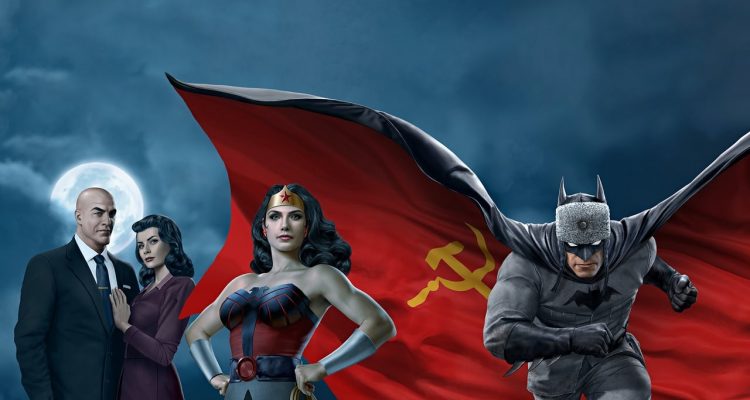 Red Son is one of the darkest Superman tales to date with a fascinating Elseworlds storyline that remains one of my all-time favourite Superman stories.

Plot: What if baby Kal-El’s rocket landed, not in Kansas, but in the Soviet Union? That is the premise of this Elseworld’s tale from DC Comics.

Review: Red Son is my favourite Superman story; the whole alternate history idea (otherwise known as Elseworlds) of what would it be like if Superman landed in Soviet Russia rather than the USA is a fascinating one.

Although this is an animated movie this story isn’t for the younger kiddies as it deals with darker political themes and there is swearing and violence in it. It’s one of the darkest Superman tales to date with The Man of Steel still as optimistic as ever but his actions are morally questionable especially when he lobotomizes some of his own people to keep them “happy”.

At around 80 minutes it’s well paced and the story is unpredictable (if you haven’t read the graphic novel) and it does change a few things to flesh out a few characters/relationships. At times it does feel a little rushed but I found it a generally satisfying watch.

A lot is packed into it as the movie covers several decades of Superman’s life as he starts out as a puppet for Stalin then he ends up becoming just as bad as he tries to bring peace to the entire world… by any means necessary.

The action is well done especially when Superman takes on the USA’s Superior Man which has a surprisingly emotional element to it.

In this tale Batman is essentially a terrorist who hates Superman as he sees him as no different to Stalin; Wonder Woman AKA Diana is now a tedious man hater and they made her especially unsympathetic, so I never really took to her.

Jason Isaacs excels as Superman giving him the right amount of naivete to be believable and likable despite some of his questionable actions.  The other voice actors are also well chosen especially Diedrich Bader who is as arrogant as ever but he provides a lot of the humour and ends up being a noble hero in this tale.

The music score is fantastic with Russian choirs throughout and it helps in creating this alternate reality.

Overall, Superman: Red Son is one of the darkest ever Superman stories but it’s also one of the best with a surprisingly complex and unpredictable narrative that will keep you on the edge of your seat. If you find Superman rather bland character normally then you might just love this iteration as it’s a whole new side of him.