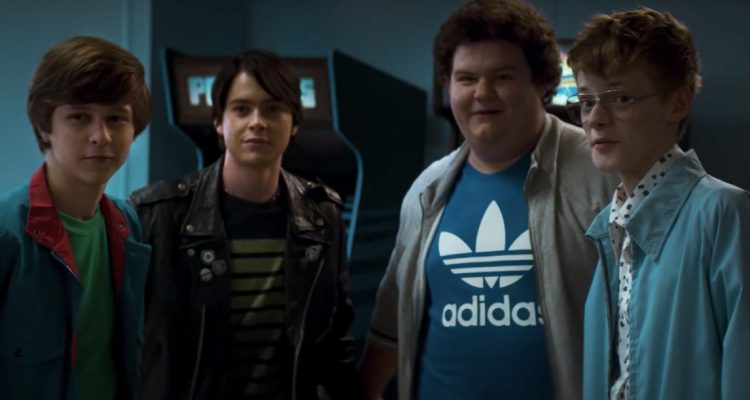 Summer of 84 is a nice throwback flick, with a terrific performance by the lead character, lots of 80’s reference, some nice suspense and a memorable ending.

Plot: Davey, ‘Eats,’ ‘Woody’ and Curtis are four teenaged friends enjoying the summer of ’84 before Davey becomes suspicious that his cop neighbour Wayne Mackey is a serial killer.

Review: From the filmmakers who brought you “Turbo Kid” – and if you haven’t seen that movie, please do yourself a favour and check it out – comes their next installment, Summer of 84.  Now, growing up, I loved a good thriller and spent a summer afternoon, cheerfully munching away on popcorn while watching big, bad men stalk poor, helpless victims with a knife.  It’s rare to see a great thriller, but I think it’s safe to say that this is a pretty terrific thriller.

Let’s start with the characters.  The main kid, Davey, played by Graham Verchere, is great.  He’s instantly relatable – there’s just something about him that makes you immediately take a shine to him.  Maybe it’s his naivety with women – he does after all moon over older girl Nikki.  Maybe it’s the conversations he has with his friends, brazen and somewhat immature dialogue that hearkens back to a time where everyone didn’t have to worry about every single syllable they say.  Perhaps it his dogged determination in proving his neighbour is a serial killer.  Whatever the case – he’s awesome. His friends, sweet-faced Woody, and bookish Curtis are wonderful characters as well and perfectly compliment our hero.  Only ‘Eats’ comes across as a caricature, the prototypical tough kid hiding a broken home. While I didn’t care much for Eats, I thought the other main characters in the kid quartet were great.

Then there’s the object of Davey’s disdain.  Rich Sommer is great, playing Wayne as an overly-friendly, somewhat creepy guy, he masterfully toes the line between making me want to call the police and making me want to call him over for a beer.  Is he everything he appears to be? I won’t spoil it, but whatever the case, Rich Sommer needs more recognition because his mannerisms, how he carries himself and how he interacts with the characters, keeps you guessing every step of the way.

Which leads me to the story – watching the first hour and a half, you may wonder what all the fuss is about. It comes across as fine, but nothing you haven’t seen before – the kids try and figure out if the neighbour is a killer, they trespass, parents don’t believe them, they find evidence that’s suspicious, but could be explained away, etc., etc.  Not bad, but not something you haven’t seen before.  However, if you wait until the last twenty minutes – holy cow. That last twenty minutes, I sat in disbelief as things transpired. As I said, I won’t give anything away, but the movie definitely takes some risks, leaving the movie with a rather unconventional ending.  Those twenty minutes is enough to elevate the entire movie and make what had been a pretty good movie up to that point to something special.

For 80’s nostalgia fans, there’s plenty for you as well.  There’s all sorts of references and what not, and it just makes you feel like you’re in that time period.  The stuff discussed by the characters, it has all the feel of growing up in the ’80s and being one of those kids who grew up in that time period, it is something special to walk down memory lane and relive a simpler time in my life, through the interactions of the characters.  The look and the feel of the movie just screams the 80’s.

So do yourself a favour, especially if you like your thrillers.  Go find some popcorn, butter that sucker up, grab that special someone and throw this puppy into the DVD/Blu Ray player.  You’ll get a trip back to a somewhat simpler time, with great characters, suspense, a plot that keeps you guessing and a killer ending. What more could you ask for?