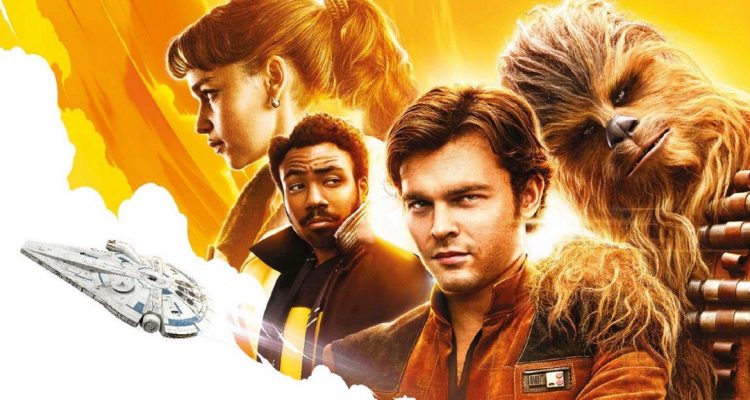 Solo isn’t all that disappointing as expectations were low going in but I had hoped for better. If you can separate it from the movies and take it for what it is then you may just have a blast.

Plot: Young Han Solo finds adventure when he joins a gang of galactic smugglers, including a 196-year-old Wookie named Chewbacca. Indebted to the gangster Dryden Vos, the crew devises a daring plan to travel to the mining planet Kessel to steal a batch of valuable coaxium. In need of a fast ship, Solo meets Lando Calrissian, the suave owner of the perfect vessel for the dangerous mission — the Millennium Falcon.

Review: When I think of Star Wars, I think of a high stakes space opera that changed the landscape of cinema. Well, Solo: A Star Wars Story doesn’t make me think the above statement; it takes a character we love so dear and drags him through the mud, literally.

Solo: A Star Wars Story suffers from a lot of problems. You probably heard about the behind the scenes drama with this movie – the firing of the original directors Phil Lord and Chris Miller with Ron Howard picking up the reins to complete the film. Unfortunately, throughout you can see the different visions of the film being played out. One moment it’s a strict comedy then suddenly it’s a serious drama. The conflicting tones make the film feel very sloppy in which you can point out the scenes Ron Howard directed versus the scenes Millar/Lord directed.

Alden Ehrenreich plays the younger Han Solo in this film, and to his credit he does what he can with the role. Unfortunately, my brain wasn’t able to adjust to him as Han Solo because I just didn’t believe he was Han Solo. Han will forever be Harrison Ford, and someone else playing this character is just an imitation. He did have a few moments where it was believable, but the rest did fall flat.

The biggest problem was the script where the dialogue never sounded like it belonged in a Star Wars film and had some clunky lines. Everyone keeps raving about Lando but to me he felt more like a parody and the video blog scenes were excruciating.

Also, every Star Wars film (minus the prequels) the Empire plays a big role, you always felt the presence of the Empire even though they weren’t on screen. In Solo, you really don’t get anything from the Empire, you see them in the beginning and sprinkled randomly throughout, but that’s about it – not the menacing Empire that we’re accustomed to.

Even with its problems, there is some light at the end of the tunnel. A few moments and characters do shine through. Qi’ra (Emila Clarke) and Beckett (Woody Harrelson) add a new element to Star Wars which I really enjoyed, but the standout of the movie is L3 – Lando’s hilarious co-pilot droid. L3 has some of the best moments, which really keep in tradition that droids are the best part of the Star Wars franchise.

One of the best moments comes at the end but I can’t spoil it – it’s a big moment, but if you’re confused I suggest watching Rebels and Clone Wars for clarification (even though it somewhat muddies the timeline a bit.)

In terms of action there was the Kessell Run escape in the Falcon and a heist sequence which was admittedly impressively put together and yet strangely uninvolving; I found so many scenes went on for longer than they needed to and even the way some were shot made it difficult to see what was going on.

The music score is arguably the weakest of the series too with only a few standout moments, namely the Kessel Run sequence where we get the Asteroid Field music from Empire.

I feel like this is a missed opportunity considering we could have had Fett or other Bounty Hunters in the movie but instead we get several forgettable characters who never make much of an impact.

Overall Solo: A Star Wars Story is a movie that could potentially divide the fan base just like the prequels did. The behind the scenes drama does unfortunately play out in the film, and Alden Ehrenreich isn’t really believable as Han Solo. Sad to say, this is probably a Star Wars film to leave out of the Star Wars marathons, it just doesn’t live up to the expectations.