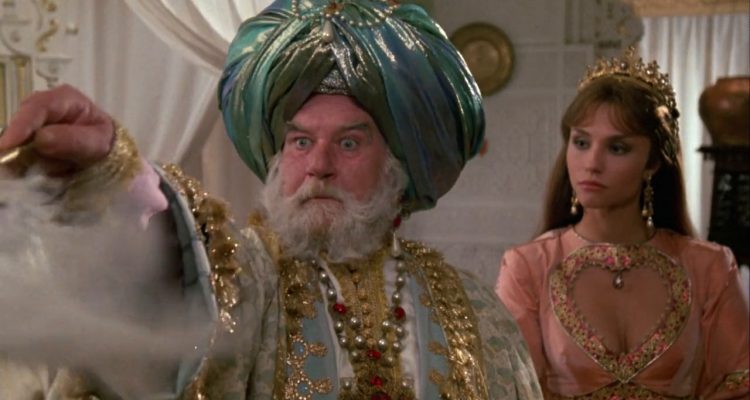 A true turkey of a movie in almost every regard. Even hardcore sword and sorcery fans will be bored and annoyed.

Plot: Sinbad and his shipmates aid a young prince, who must battle an evil wizard to gain the hand of a beautiful princess.

Review: A mother reads her daughter a really long bedtime story. She reads Edgar Allan Poe’s The Thousand and Second Tale of Scheherazade, which goes something like this: An evil magician named Jaffar (John Steiner) has eyes for the sultan’s daughter Alina (Alessandra Martines), who is in love with Prince Ali (Roland Wybenga). Jaffar curses the sultan’s land and everyone disappears, leaving the sultan in a trance because he won’t grant Jaffar Alina’s hand in marriage. Along comes Ali with his friend Sinbad the Sailor (a massively chiseled Lou Ferrigno) and crew (including a guy named Viking and a guy named Samurai which should clue you into how they look), who all wonder what has happened to everyone in the realm, and Jaffar, sensing that they are a threat, puts them through some difficult trials. Sinbad and his crew must quest for three magic stones to defeat Jaffar, and along the way they become trapped by a band of “mind vampire” Amazons, a rock monster, and some other perils. Jaffar, with a wisecracking muscular sidekick woman named Soukra (body building champ Teagan Clive), lose to Sinbad and Ali.

From the thrifty Cannon Film Group, Sinbad of the Seven Seas might be one of the worst movies they ever produced – even worse than the Ferrigno-starring sequel to Hercules. It’s unbelievably chintzy with a woefully bad script, terrible acting, and a cheap, electronic rock score that grates on your every nerve. Ferrigno, who looks amazing in this, has no business playing a svelte pirate named Sinbad. After the mother finishes telling her story and her daughter has fallen asleep, the movie continues regardless. The irony. Directed by Enzo G. Castellari and Luigi Cozzi.

Kino Lorber’s new Blu-ray gives the film a justice it doesn’t deserve. A marked improvement over the previous DVD from MGM, it has a sharper picture image. Only the most die hard fans of Ferrigno and sword and sorcery fans should seek it out.