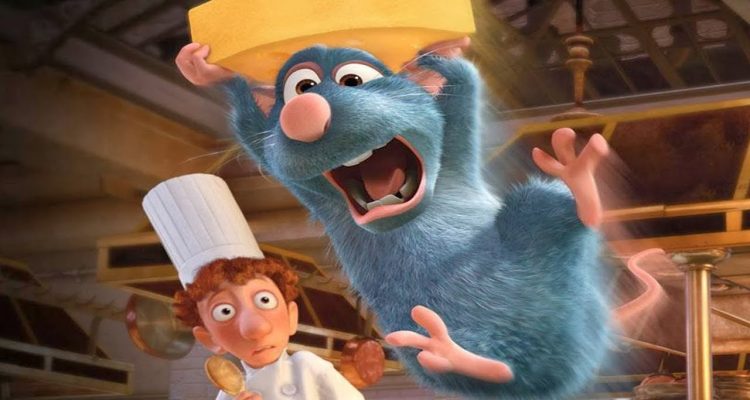 A terrific and amusing film with some excellent character work and a lot of heart.

Plot: A rat named Remy (voice by Patton Oswalt) learns to cook after reading a famous chef’s cookbook and teams with the chef’s son (voiced by Lou Romano) to save the chef’s sinking restaurant.

Review: Pixar is really weird for me. I either greatly enjoy their films (Onward, Wall-E, Monsters Inc.), or I find them completely overrated (Finding Nemo, Up, Inside Out). There’s no real middle ground for me. I either think it’s top-notch, or I’m just like, meh. Like most Pixar films, I’d heard nothing but raves about Ratatouille – a movie I knew nothing about other that it featured a rat who could apparently cook. Seemed far-fetched, but eh, its animation, where we’ve had mermaids, genies, and a mouse detective – so I couldn’t grouse too much about the concept.

Well, you can safely put Ratatouille in the former group for me – I thought it was fantastic! It starts out a bit slow, but the movie really picks up when the main character finds himself in Paris. I found myself more and more engrossed in the story, which quite frankly admitted how absurd it was but still plowed through with gusto. I thought the voice acting was terrific, with standout performances by the food critic (played by the late, great Peter O’Toole), Oswald Patton as Remy and Lou Romano as the hilariously named Alfredo Linguini.

For the humour, while I wouldn’t say it was a laugh-out-loud riot, it was a pretty clever spoof of the food industry, especially if you’re in the know about the goings-on thanks to the proliferation of famous chefs who have had cooking shows in the past century. While there’s no Gordon Ramsey or Anthony Bourdain-type role, quite a few of the characters are purported to be based on real-life culinary figures. Even if you’re not in the know, though, the movie is a pretty good send-up of the stereotypical snooty French restaurant atmosphere.

However, what really drives this movie is the heart that’s in it. You wouldn’t think that there would be a lot of emotion in a film that features a rat as the main character, but by the end of the film, I found myself rooting for Remy to succeed, despite his obvious shortcomings. To the end, the movie has a very satisfying conclusion that gives just rewards for the characters you met and cheered for during the film.

While I wouldn’t say that Ratatouille is the best Pixar film, it definitely is up there. If you can get over the concept of a rat showing a human being how to cook and just sit back and enjoy the film, I think you’d find it to be a pretty great ride.