Prior to U.S. and worldwide distribution, the new Australian western OUTNUMBERED launches its trailer and its poster for pre-release review purposes! Released theatrically earlier this year in Australia, it has proved a success in its native country.
OUTNUMBERED is a gripping western tale of family, revenge and justice, set in the late 1800’s in Australia.The movie opens with two young boys, Billy and Jack, witnessing their father being gunned down in cold blood.  The movie then skips forward some twenty plus years to where Billy and Jack come across a stagecoach that has been held up.  There is one survivor, a young Pinkerton Marshall, who is the only witness to the robbery and murder of his fellow Pinkerton Marshall, the stagecoach driver and his off sider. Billy and Jack endeavor to get the young Marshall to medical help and contact the authorities.  In doing this good deed, they themselves become the target of the villainous Crocker and his gang of robbers and murderers.  A race against time and outlaws begins, just to stay alive, involving kidnappings, hostage situations, double crosses, shoot outs and gun fights. Not only is Billy and Jack’s courage tested, but their moral values as well, when it is revealed that Crocker is the same man who had killed their father.   Is it justice or revenge they seek?

Filmmakers’ Statement:
OUTNUMBERED is a gripping drama of the ‘western’ genre, filmed in the picturesque Freestone Valley, on the Darling Downs, Queensland, Australia.  OUTNUMBERED was made by Chris Mauch, with the assistance of his wife, Julie, both being 5th generation Aussie cattle and crop farmers.   Since he was a boy, Chris has had a love of film, both behind and in front of the camera and has always dreamed of making a feature film that the whole world can see and enjoy.  This love partly was inspired by his father, Ivan, who made mini movies on his 8mm camera.
Almost a decade in the making, OUTNUMBERED is an action packed, gun fighting drama with twists, turns, a little humor and engaging characters tied together with beautiful Australian landscapes and horse riding scenes.   A remarkable feature of this movie is that most of the cast are not actors pretending to be cowboys but are, in fact, real Australian cowboys who just happen to be able to act!
Great appreciation and credit must go to Emmett Adcock, the Director/Cameraman/Editor for his incredible vision, creative talent and film expertise.   His massive contribution made OUTNUMBERED more than we could have ever hoped for. 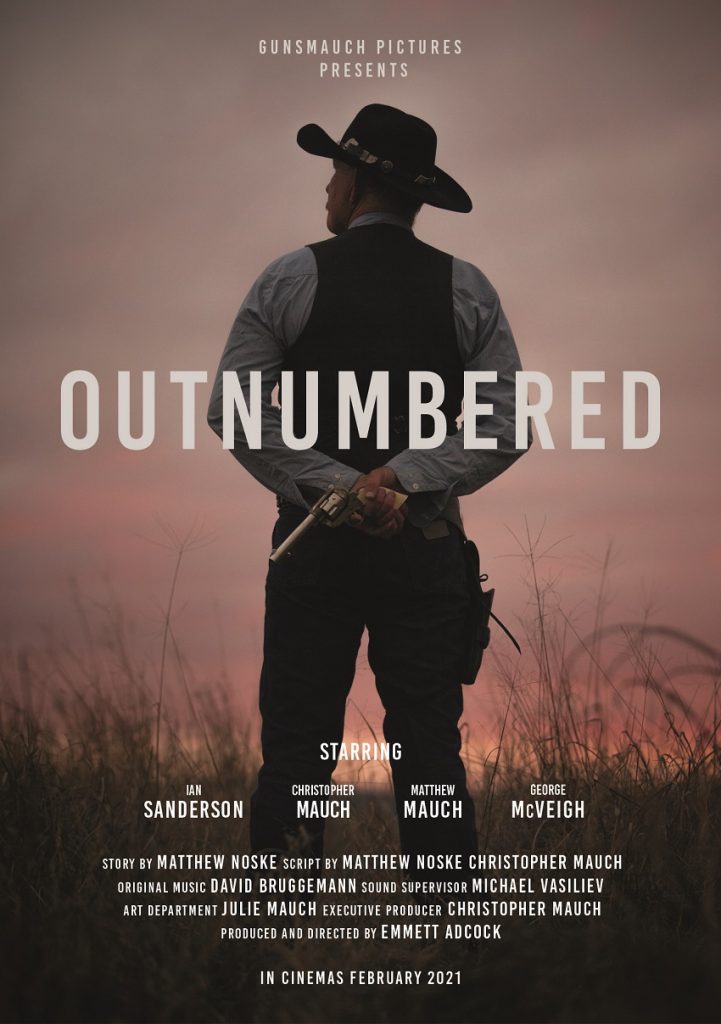