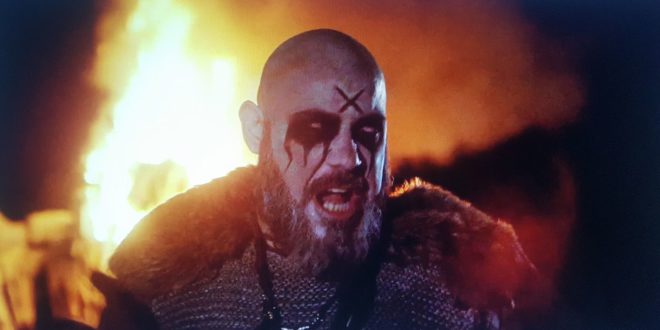 Fun sense of humor. Rolfe Kanefsky’s films are ALWAYS fun, and this one is right up there. It’s a gorefest for gorehounds, and there’s a heavy dose of sex and nudity for those interested in that sort of thing.

Plot: When a party bus on its way to Burning Man filled with a bunch of sexy young adults breaks down in the desert and in the middle of a group of Satanic worshippers, all hell literally breaks loose.

Review: A young woman named Lara (Stefani Blake) steps on a Las Vegas tour bus to Burning Man on the eve of her 18th birthday. The bus driver (played by Sadie Katz) has a sinister agenda, but no one on the bus has a clue what’s in store, and boy they’re all in for it! The bus heads straight into the desert wilderness, breaks down, and the bus driver disappears, leaving the party animals (who alternate between drunk, horny, and stupid or all three at the same time) to fend for themselves. As night falls, a cadre of cultists and demon worshippers pour in from the wasteland and lay siege to the bus and everyone inside (those outside are dispatched gorily and with extreme prejudice), declaring their devotion to a dark god and the “chosen one,” who may be one of the survivors on the bus. As it turns out, Lara has been singled out because she’s actually a virgin, and whether or not she’ll end up being a sacrifice to the dark god of hell is up to her and her fellow travellers. What follows next doesn’t go quite as you think it might, but you can best be guaranteed that there’s gonna be some more sex, graphic violence, and hilarity as the party bus to hell speeds its way to its final destination.

If you’re tired of all the insipid low budget scare movies that have glutted the VOD market and even your local multiplexes, then pay attention to the work of filmmaker Rolfe Kanefsky, whose filmography is full of inspired and fresh sexy horror movies. From There’s Nothing Out There to The Hazing to Nightmare Manand last year’s The Black Room, his work has consistently maintained a sense of quality and flare that most other horror filmmakers’ body of works woefully lack. Party Bus to Hell features some intense gore, fairly graphic sex scenes and full frontal nudity (a Kanefsky staple), and a sense of humor that manages to alleviate the gonzo violence and blood and guts coming from every direction. Also starring Tara Reid in a wacky extended cameo.

Party to Hell will be released in theaters and on VOD April 13!