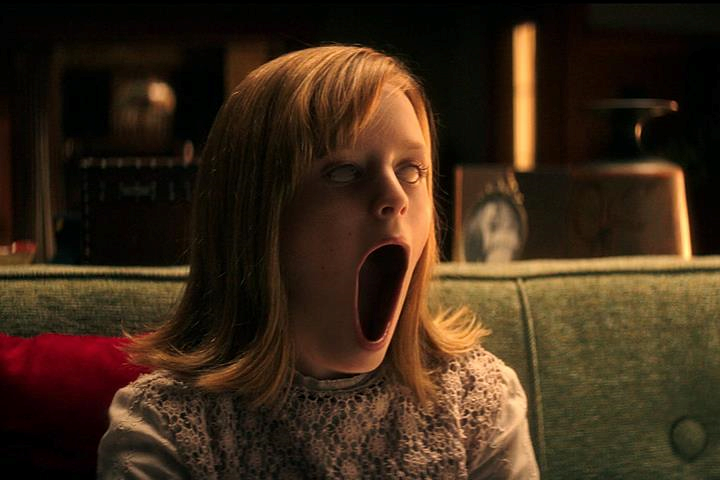 Origin of Evil has a few decent scares and you can never go wrong with creepy children but it’s not as good as other recent ghost stories which make you wonder what will happen next while hiding behind your chair.

Plot: In 1967 Los Angeles, widowed mother Alice Zander (Elizabeth Reaser) unwittingly invites authentic evil into her home by adding a new stunt to bolster her séance scam business. When the merciless spirit overtakes her youngest daughter Doris (Lulu Wilson), the small family must confront unthinkable fears to save her and send her possessor back to the other side.

Review: I’d heard great things about this horror prequel so I sadly went in with quite high expectations which may not have been a good idea as I found Origin of Evil to be merely OK. It had a few moments which made the skin crawl and the ending was fabulously downbeat (as horror should be) but compared to The Conjuring movies it just wasn’t scary enough. It had a few jumpy moments but our audience never screamed throughout or even laughed which is never a good sign. I remember watching the Conjuring 2 and people were screaming, laughing and chattering excitedly throughout.

Like the first Ouija from 2014 this was quite slow for the first half; it built up moments of dread and tension but I didn’t like the main family enough to care about what happened to them but I thought Doris (Lulu Wilson) was the best actor in the movie.

As with the majority of children in general she could come across as creepy without much effort but there was a moment in the basement where her possessed face contorts into an evil smile that will haunt me for weeks.

There’s never really much characterization but enough to keep you engaged for the runtime; it was nice to see Henry Thomas (E.T.) in such a pivotal role as a conflicted priest who is trying to hide the fact that he just might fancy Alice (Elizabeth Reaser). None of it really matters though as the movie (rather slowly) moves along to its messed up conclusion.

During the final 20 minutes I was surprised that this movie was rated PG-13 as it gets quite disturbing so I would maybe think twice if you’re thinking of taking young children to see it; you may be thinking “why would I take young kids to see a movie like this?” but you’d be amazed by how many were in the audience with me.

It’s an improvement over the original Ouija but once again it just doesn’t make the most of the idea and I feel like it should be terrifying but it never is. When we eventually get to the big reveal about the spirits it was quite underwhelming and by that stage I didn’t really care.

Overall, Origin of Evil has a few decent scares and you can never go wrong with creepy children but it’s not as good as other recent ghost stories which make you wonder what will happen next while hiding behind your chair. It’s worth a rental but this series in general hasn’t grabbed me.