Forte’s an acquired taste, and his self-deprecating humor is a bit much, but if you’re going to make a spoof of MacGyver, then nobody would do it better than him.

A living legend is called into active duty after being “dead” for 10 years to help stop a madman from nuking the world.

After living off the grid for 10 years of being “dead,” Macgruber (Will Forte) is called upon by his superior, a hardass general (Powers Boothe) to lead a do-or-die mission to stop a madman named VonCunth (a puffy Val Kilmer) from nuking the world. Macgruber has somehow garnered legendary status: He is unstoppable in his ineptitude, but he’s like the energizer bunny stuck in an ’80s time warp. He’s never used a gun in his life, and instead prefers paperclips and trash (and stocks of celery in a pinch) to get the job done. His nemesis is VonCunth, and their history goes back to college when Mac stole the heart of VonCunth’s girlfriend (Maya Rudolph), and when VonCunth got his revenge by killing her at the altar when she was about to marry Mac, Mac is ready for his revenge all these years later. Macgruber’s team is assembled, but after an accident kills them all at the same time (his fault), he assembles another one: a rookie agent (played by Ryan Phillipe) and a songwriter and sometime agent named Vicki St. Elmo (Kristen Wiig), who has held a flame for Mac for years. Macgruber is a colossal tool and an asshat when it comes to his job, but somehow, by some miracle, his methods work and he retains that legendary status by the end of this mission.

A box office flop when it was theatrically released but garnering a bit of a cult following, Macgruber is such an anomaly as far as these spoofs go. It parodies an ’80s show (MacGyver) but turns it into a hard “R” rated comedy with an overabundance of profanity, graphic violence, and crude sex gags, and while it certainly has its moments it really makes you wonder what the heck these guys were thinking. I remember being appalled by it when I saw it opening day, but after an eleven-year gap between viewings, I sort of enjoyed how ridiculous it was. It seems like they don’t make comedies anymore of any kind these days (PC and Woke culture has pretty much cancelled comedy), and so I was able to appreciate this one for what it was. Forte’s an acquired taste, and his self-deprecating humor is a bit much, but if you’re going to make a spoof of MacGyver, then nobody would do it better than him. From director Jorma Taccone.

Mill Creek’s recent Blu-ray edition of Macgruber is a barebones, but budget priced release, and it doesn’t have any special features. The picture quality and sound are more than adequate. 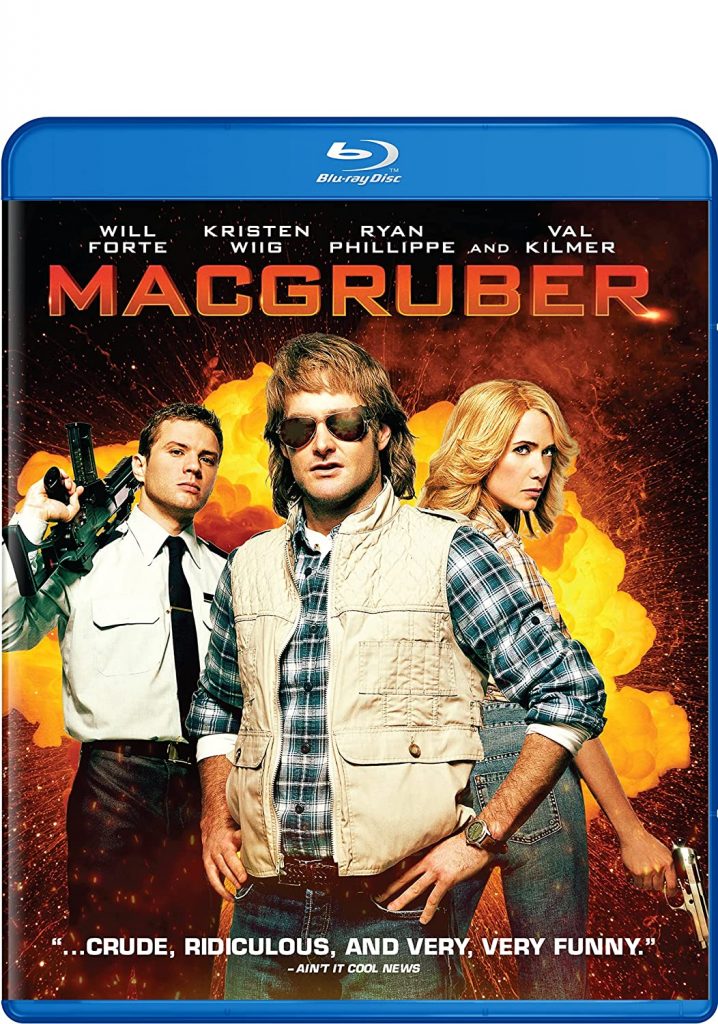