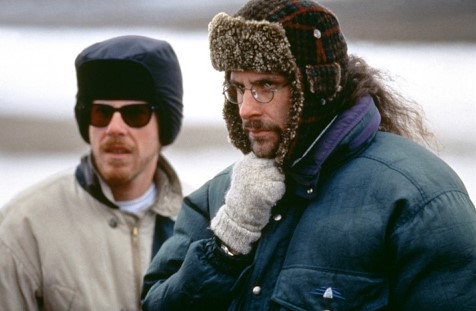 Legends of Comedy – The Coen Brothers

Some would say that of all the various subgenres of comedy, from slapstick to satire, from farce to rom-coms, the cleverest and most satisfying is that outlier of the comedy genre: the black comedy. Sharing components with tragedy and outright horror, black comedy is for those who find humour in the macabre, in the dark parts of the world, in what some would call that terrible cesspool known as the human condition. Fans of black comedy are more likely to laugh at murders in movies, recognizing the absurdity of the act, while other moviegoers would probably recoil in horror.

Joel Coen and Ethan Coen, better known as the Coen brothers, are masters of black comedy. While some would argue that their movies are not all-out gut-busters (which I would respectfully disagree with), it is undeniable that the Coen brothers have elevated this lesser-appreciated comedic category into an art form. Rightfully recognized for their efforts with numerous awards and critical lauds, they are the kingpins of the offbeat and the oddly absurd. While theirs is admittedly not to everyone’s taste, I think it would be hard to find someone who didn’t find at least one of their flicks entertaining.

Let’s start with Burn After Reading. Like most of their comedies, there is a crime element to the film – in this case, the acquisition of a disc with what is believed to be sensitive information that the various characters try to possess throughout the film, even though the disc actually contains nothing of importance. This leads to murder and mayhem, all with a comedic slant. For instance, Frances McDormand and Brad Pitt are two health nuts who believe the disc holds sensitive information and try to acquire it get McDormand plastic surgery – which you could argue she does not need. Pitt’s hapless, clueless performance is terrific and emblematic of the movie’s theme – in fact, a conceit to most successful Coen brothers movies – the character who is out of their depth.  Burn After Reading should not be as funny as it is, but the characters are so clueless, their motives so brazen and blatant, and their ignorance so complete, you can’t help but laugh at the shenanigans.

The Ladykillers is that rarity, a pretty good remake. In this version of the story, Tom Hanks plays a conman who masterminds a casino heist with the aid of some shifty associates, including Marlon Wayans, J.K. Simmons and Ryan Hurst. When the crew is found out by a God-fearing widow, they attempt to either murder her or run off the loot – each meeting their ends in ridiculous manners and ending up on the same garbage barge that was used to ferry away the dirt that dug out to create their tunnel for the heist. This movie is just delightfully nuts; Simmons is a riot as the talkative demolitions expert – of course, he suffers from Irritable Bowel Syndrome, and of course, he met his girlfriend at a singles meet specifically for people who suffer from IBS – only in a Coen brothers film. It’s all silly, ludicrous and great fun.

Fargo is perhaps their best most acclaimed film with Frances McDormand trying to solve the murder of a state trooper tied to the kidnapping of a car salesman’s wife. Steve Buscemi and Peter Stormare play the kidnappers, and they’re just terrific, spending the time after kidnapping the woman watching television and calling in escorts. Their boredom with their act and the swift and brutal way they turn on each other (leading to Stormare trying to feed Buscemi’s dismembered body into a woodchipper) is hilarious, and Stormare’s quiet, deadpan performance stands out and is a perfect foil to Buscemi’s motormouthed, frenetic style. Fargo is one of those movies where the movie isn’t, again, laugh-out-loud funny, but it’s so bizarre, and the characters are so interesting, you can’t help but be entertained, even if it’s not funny in the conventional sense.

The best of the Coen brothers, though, and in my opinion, one of the top ten comedies of all time, is The Big Lebowski. I could have written this entire post about this movie, which features Jeff Bridges and John Goodman at their very best as an easy-going pothead and a paranoid Vietnam vet, respectively. I find myself quoting this movie constantly, and John Turturro’s brief appearance as the pederast Jesus steals the show – his outrage that the Dude and Walter want to reschedule the semi-finals bowling match due to Walter’s observance of Shomer Shabbos, only to lead to an epic smackdown speech is probably one of the funniest parts in any movie. Bridges and Goodman are just so perfect together, with Goodman’s intensity overpowering Bridges’ friendly sloth. I literally have to rewind the film to watch parts, even after seeing it multiple times. I constantly laugh through the flick – scenes like the failed ransom dropoff, “Is this your homework, Larry?” and Walter’s botched eulogy to Donny just make me howl. The timing, the writing of the scenes, the portrayals – this is about as perfect a comedy film as you’re going to get. Only from the unique minds of the Coen brothers is this film even possible.

The Coen brothers’ work features a blend of unique writing style, absurd yet familiar situations and memorable characters. While not all of their films have hit, there is nothing like the experience when they do. If you haven’t seen any of their work, I strongly recommend catching it, even if it’s just The Big Lebowski. I don’t think you’ll be disappointed.