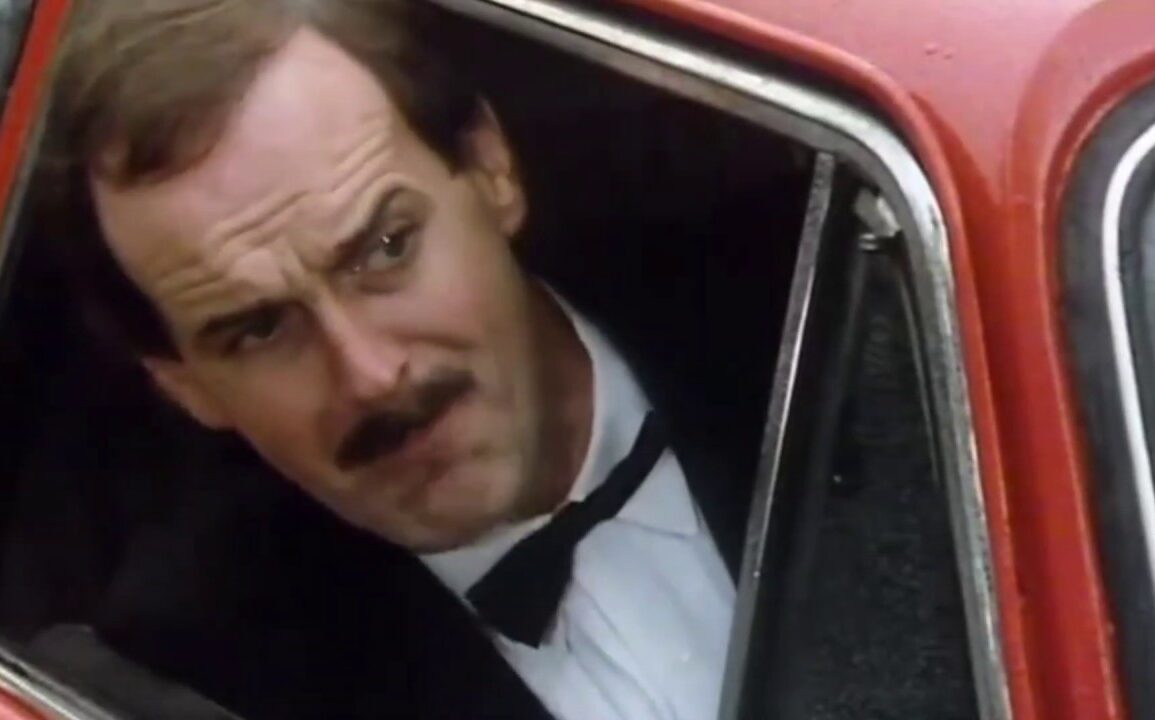 Unlike some of the other legends of comedy that I’m going to touch on, John Cleese, while he may be most associated with humour, has worked successfully in different genres. Amongst his non-comedic roles include Mary Shelley’s Frankenstein, the Harry Potter movies, and Silverado. That being said, his most classical work, I think, are comedies, which is why I added him to the list. Also, unlike some of the other legends, Cleese has played a supporting part in numerous movies, leading to a more condensed mention of his legendary roles than some of the others focused on in this series.

Of course, you can’t possibly talk about John Cleese’s comedy career without mentioning his work on Monty Python. What was so great about the Monty Python series and the companion movies was how sheerly banal it was. Rather than spoof a specific genre, Monty Python made fun of everything, especially religion and history. Who can forget Cleese fighting his way up a staircase, killing everyone in sight, only to find out he stormed the wrong castle…and then apologized before murdering a bunch more people as he exited? Or how he ridiculously taunted the heroes from the battlements in Monty Python and the Holy Grail? Or the Ministry of Silly Walks? Cleese and his band of merry maniacs were endlessly entertaining for anyone who ever appreciated the absurdity of civilized existence.

Next, we move on to my favourite role of Cleese’s – Basil Fawlty. As the chief proprietor of Fawlty Towers, Cleese endures an endless array of ignominies, as he always strives to get ahead in some way, be it gambling, even though his wife forbids it, or by making the bed-and-breakfast more aristocratic, but failing miserably. You would often find the Basil character muttering darkly under his breath at folks or, in the hilarious case of the failed fire drill, outright shouting at them, such is his frustration with the commoner guests of his hotel who he feels are beneath them. Add in a hapless porter who barely speaks English and is the constant target of Basil’s wrath, and even though Fawlty is not a very good human being, he is entertaining to watch.

Next is the classic, A Fish Called Wanda, which sees Cleese’s proper British demeanour clashing with Americans Jamie Lee Curtis and Kevin Kline. Here, Cleese is more of a straight man, allowing Kline and Michael Palin to take on zaniness duties. Kline especially works well with Cleese, as they are a perfect clash of cultures, with Kline’s foulmouthed Anglophobia serving as an ideal foil for Cleese’s upper-crust and slightly snobbish personality. A Fish Called Wanda is a pretty good crime movie but a better comedy, and even though Cleese is not the primary catalyst for most of the hijinks, his work allows the other cast members to shine that much more brightly.

That leads to his other movie with the same cast, Fierce Creatures. While not as memorable or funny as its predecessor, Creatures is still a fun movie, with Cleese playing a different role, this time as the socially-awkward director of a zoo. Cleese shines in the part of the hapless Lee, who finds himself in ridiculous situations (mostly involving mistaken or out-of-context scenarios of a sexual variety), and the chemistry built with the cast in A Fish Called Wanda is still evident.

While he has had fewer starring roles than those mentioned above, I still enjoyed Cleese’s supporting role work in the latter of the Pierce Brosnan films (where he is Q’s somewhat inept apprentice and then successor, R) and working alongside Steve Martin in the second of the Pink Panther reboots (his Chief-Inspector Dreyfus was a nice counterpart to Martin’s ignorant and absurd Clouseau).

In closing, while John Cleese has had a more varied career than some of the other artists on this list, his contributions to the world of comedy cannot be discounted. Whenever you think of a man walking ridiculously down the street with a stiff-upper-lip or a man mouthing words to throw off an annoying hearing-challenged guest, or a man hanging out a window and apologizing to the bozo who is holding onto him by his ankles, just remember – that’s John Cleese you’re thinking about.