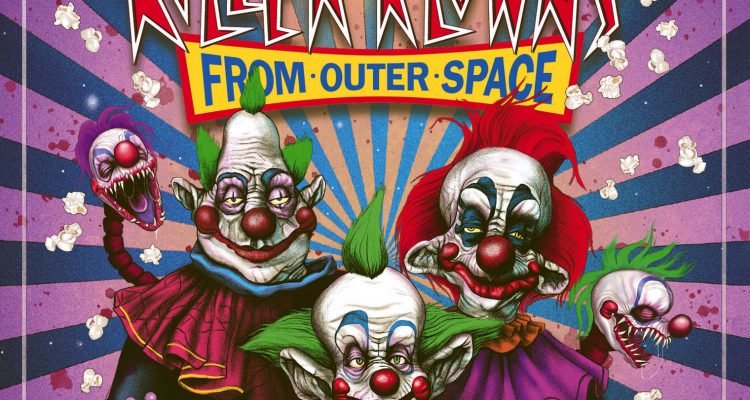 A bona fide cult classic, Killer Klowns lives and dies by its incredibly rad looking make-up and special effects by the brothers Chiodo Brothers (director Stephen and his collaborators Charles and Edward).

Plot: Aliens who look like clowns come from outer space and terrorize a small town.

Review: Big, oafish looking clowns from the deep reaches of space set up shop – a depthless spaceship that appears to be a circus tent – in the woods, and they systematically terrorize a small town. Their goal is to collect as many people as possible for consumption before they head off to the next planet. Strange that they would take on the guise of clowns (they’re ghastly looking), and their appearance disarms the local populace, who think they’re being gagged. It’s up to a heroic sheriff’s deputy and a couple of love struck teens to save their town … and ultimately, the universe from the killer “klowns” from outer space!

A bona fide cult classic, Killer Klowns lives and dies by its incredibly rad looking make-up and special effects by the brothers Chiodo Brothers (director Stephen and his collaborators Charles and Edward). These Klowns are each distinctively weird, with unique facial expressions and menacing qualities. The movie is a bit of a goober, with a lame plot, but it has an oddball sense of humor that works for the midnight movie crowd.

Arrow Video went all out with their recent Blu-ray release of this film. Aside from a brand new 4K restoration, there are some archival special features, including a commentary by the filmmakers, and a new interview with cast and crew. Also included are early works by the Chiodo Brothers, which is worth the price of the package all by itself. Many more features fill up the special features, so if you’re one of this movie’s biggest fans, then there’s no better time to grab this one while it’s available!