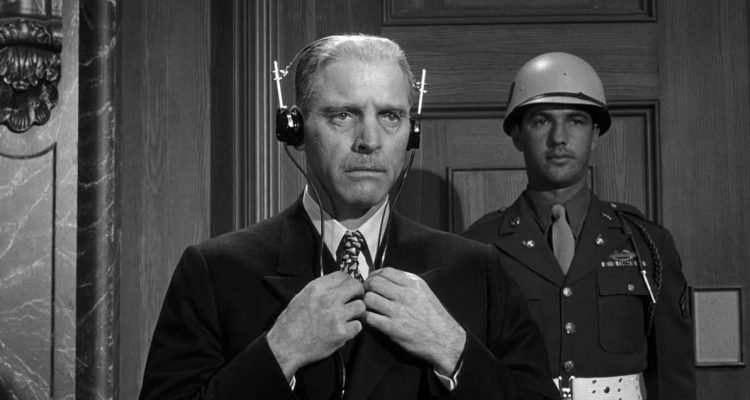 Judgment at Nuremberg is probably the most complete war movie I have ever seen, filled with powerhouse performances and excellent dialogue.

Plot: 4 Nazi judges are put on trial by an American tribunal to answer for their actions during World War II.

Review: I have wanted to see this movie for a long time. Besides being interested in war stories, particularly set in Europe during WWII, the director, Stanley Kramer, made my favourite movie of all time, Inherit the Wind. If you haven’t seen Inherit the Wind, carve out some time if you can and give it a view, because it’s excellent. Anyhow, this movie has an amazing cast and an interesting premise, so thought I would give it a shot.

First of all, the cast fulfills all the promise of their all-star stature. No actor in Hollywood can give a finer speech than Spencer Tracy – the man is so powerful and intelligent in his approach to any role, and he does not disappoint in his role as the lead American judge in this case. Maximilian Schell won an Oscar for his role in this film as the defence attorney, and he definitely deserved it – his performance is, in a word, thunderous. Richard Widmark is up to the task of opposing Schell as the prosecuting attorney. Burt Lancaster is understated as one of the defendants. Strangely though, the two most standout performances were by two supporting players – Judy Garland as a German girl who is a crucial witness and Montgomery Clift as a beleaguered German man for the prosecution. Garland definitely deserved awards for her role, as her sad yet strong performance stood out amongst all the other A-listers. Clift is borderline unrecognizable, and his confused muddled delivery and wide-eyed reactions to everything make you forget that he’s acting – you’d swear he somehow transformed from matinee idol to pitiful, slow reject. Everyone brings their A-game to this movie.

Then there’s the story. Man, oh man, can Stanley Kramer do dialogue. Even though the movie is 3 hours long, you forget the length as the movie hooks you from the beginning and doesn’t let go. Like all great courtroom movies, it’s dramatic, it’s interesting, and it moves at a brisk, yet thoughtful pace. The great part of this story is, unlike a lot of war movies, where the Germans are portrayed as evil robots who mindlessly follow orders, this movie gives convincing arguments for both sides of the equation. While morally, one side is definitely above the other, the movie questions if the audience would have done anything else if they were in the German folks’ shoes. Not only that, but it also gives an interesting look into the post-war politics, where the Americans find themselves needing their erstwhile foes, while the Germans are struggling to regain face after such a terrible legacy earned during the war.

I will say this movie is not always for overly sensitive people. There is a pretty tough sequence in the middle of the film, where they show footage from one of the concentration camps, and it’s a tough watch. If you’re the sort of person who can’t watch those sort of things, I’m warning you now that you’re probably going to bail from the movie at this point. It definitely drives home the atrocities that took place in the camps.

Anyhow, if you can deal with such things, then I strongly recommend screening this picture. It has everything you would want from a courtroom drama – great performances, lots of think about, and powerful drama. Its status of a classic is very richly deserved.