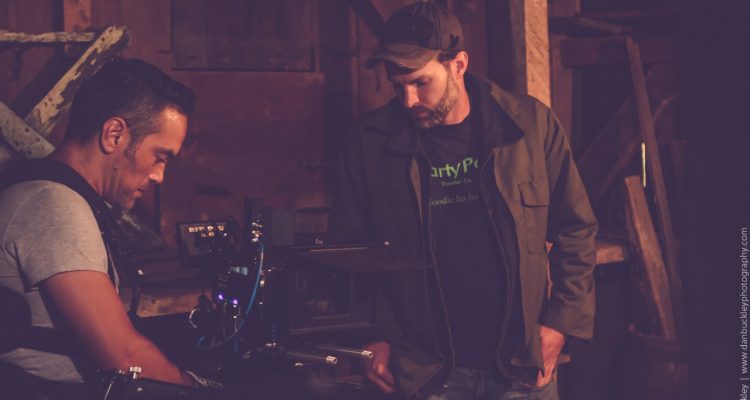 INTERVIEW WITH JOHN WOODRUFF ON ANIMAL AMONG US

Filmmaker John Woodruff said his latest film, Animal Among Us (which gets a home entertainment premiere next month), was originally pitched to a major company who suggested he instead just make it himself!

Q: Such a cool concept, sir! Was there ever a time when the film wasn’t going to be done independently, with fresh faces, and a newcomer-director in charge? Can you imagine that version?

Thank you! Interestingly enough, very early on, we pitched AAU to a warm contact who has always been very supportive and just so happens to be a creative exec at a very high profile production company. After checking it out, he basically said that there wasn’t a reason in the world why we shouldn’t just go make it ourselves… he felt that it was very do-able and that it would find an audience, we just didn’t need a mega huge company behind it to get it made. That feedback and advice shifted our entire production strategy. Up to that point we very much were going about it from a “pitch it to a larger company to get it made” perspective and we absolutely didn’t need to. I’m so grateful that he told us to just go make it because otherwise we might still just be pitching! Haha! So once that happened, we really began to have a lot of conversations about who was going to be acting in this thing, who would direct and what the budget would be…everything is scale-able, so we just wanted to find that point in which we could get it made. We didn’t know if we would have names or fresh faces and we didn’t know who would direct, but as we had conversations among ourselves and with people outside of the production, it slowly started to take shape… as we got closer to dialing everything in, it became clear that the newcomer directors we could access really didn’t have any more experience than I did and they definitely didn’t know the project as well, so it just didn’t make sense to bring someone else in. I can imagine that bigger version and honestly, I think that it would have lost a lot of the texture and aesthetic that this film has… in a way, it needed to be done on a completely independent level to capture some of that nostalgia and sentiment of the wildly successful indie horror films from the late 70’s and through the 80’s…to make it bigger definitely would have compromised that, which I think would have worked against the story on multiple levels… 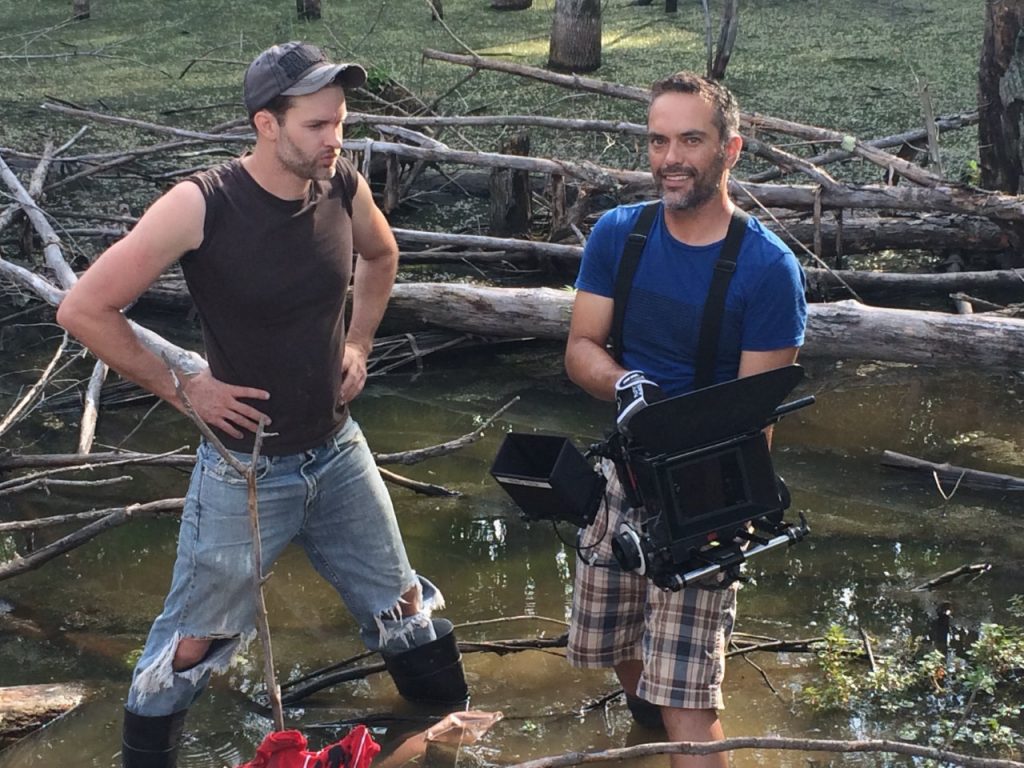 I would imagine that it’s really a pick your poison kind of thing. There have to be pros and cons to each, the biggest pro to doing it independently it would seem (as stated in the question) is that you have a lot more control… you don’t have to answer to an army of execs… outside of that, I don’t know because I’ve never had the pleasure of making a studio film, though I very much want to… I’m so fascinated with the process and there isn’t much cooler than getting to walk onto a studio lot, haha! So yeah, if anyone needs a studio film directed, uhhhhh give me a call, haha-

Q: What films or filmmakers inspired Animal Among Us?

We pulled a lot from late 70’s and 80’s horror in general, early Friday the 13th films and obviously referenced Wes Craven and John Carpenter’s work from that era a lot. AAU is very much an ensemble cast and it’s fast and fun, so I also tried to take notes on the rhythm and pacing, character and energy of SCREAM and how Wes Craven balanced the horror and comedy in that film… I spent a lot of time exploring how John Carpenter handled blocking and movement in The Thing and also how his directing never gets in the way of the story but still remains so atmospheric and captivating… two of the greatest horror directors ever and two of the greatest horror films ever in my opinion and both wildly successful ensemble films, so what better to pull inspiration from than that? Of course it’s impossible to not be influenced by Spielberg, he is the greatest at blocking of all time (and well, pretty much everything for that matter, haha), so lots of his earlier stuff, including how they showed the shark without really showing the shark in JAWS… the thing I notice about all of these guys is that their directing never gets in the way of the story. So I tried to stay out of the way of our story too… just tell it as effectively as possible… serve the story first and the story in turn will serve you… I would be remiss to not mention Robert Rodriguez, as I pulled from his entire production strategy and filmmaking philosophy as well…he is the master of using what you have available and incorporating it seamlessly into the film and just getting the most bang for your buck, making a small film look big and his stuff is just so awesome regardless of budget, so how could you not be inspired by him? The Faculty and Planet Terror? From Dusk till Dawn? Give me a break! I’m geekin’ out over here, haha-

Obviously I pulled a huge amount of inspiration from those guys, so I think their influence is all throughout the film. We worked in a lot of references  to books and films from that era of the genre, so it should be a lot of fun for viewers to try to pick that stuff out… in a way, the entire film is one big homage to that era and genre of film and the filmmakers that defined it. A lot of times when I’m digging through newer horror, I’m looking for that thing that will “take me back” if you will, or give me that special something that I get from my favorite horror flicks from the late 70’s, 80’s and even into the 90’s and often I just don’t quite find it… so I guess you could say that I wanted to try to provide audiences with that film that takes them back to that but is new, you know? Kind of try to give them that special thing that we often have to revisit our old favorites for all wrapped up in a new film…

Q: The film’s trailer suggests there’s some really good performances in the movie- — how did you come to cast Christian and Larisa?

Amazing performances. Obviously casting can make or break your film and an actor can make a director and editors job the easiest thing in the world or the hardest and our cast made my job on that front VERY easy. They just crushed it. Always hit the mark, knew where their eyeline was, nailed the takes- and we had to move FAST- so we didn’t have a lot of time for stumbling around, and they absolutely just crushed it… It’s pretty cool because when I was first introduced to the script, Christian was already pretty much Roland. Jonathan had basically written the role with him in mind and they had already had some conversations about it, so that was cool, because it created a tremendous amount of context in developing the film… Jonathan had worked with Larisa before, as had Christian in The Babysitter’s Club, so we thought it might be fun to see if she was interested. Jonathan felt like she would be a perfect fit, but I wasn’t sure until the first time we sat down with her and she was so sarcastic, so funny and so nice that it just seemed like no one else in the world could play the part. In addition to that, she said that she would love to come out to the woods and play with guns and trucks with us, so it was kind of just too perfect… I’m still just so grateful for the cast we got, so experienced, talented, passionate, easy to work with and nice and they just crushed these roles. Erin Daniels and Heather Tom were just beyond and my good friend Don Frye killed it, it really is just an absolute dream cast.

Q: Did your leads have trouble with anything in the movie? (well, besides our ‘creature’)

If they did, they didn’t complain to me about it! Haha! But again, they are pros through and through. And look, this was my first feature, it was a small production compared to what they are usually on, so the fact that they were along for the ride and as supportive as they were? It’s just unbelievable and I’m forever grateful to each of them. The film absolutely would not be what it is without any one of them. Christian was so incredibly supportive of me, apparently he kept telling crew that I knew what I was doing and that I was the real deal, which they would then come and tell me and that helped A LOT because it can be a little intimidating working with actors that are as accomplished as they are on your first feature!

Now, I suppose the crew could’ve just been saying that he was saying that, but I’m going to go ahead and give him the credit for saying it! It helped a lot! Haha!

Q: What is the greatest bigfoot movie of all time?