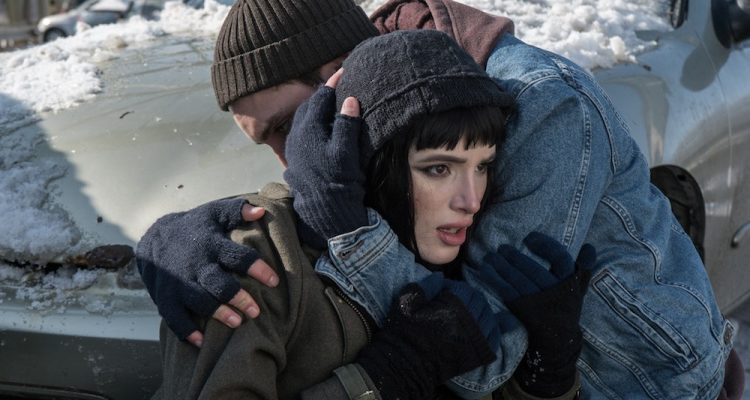 It should appeal to several different demographics, and it held my interest the whole way through.

Plot: Set ten years after an apocalyptic event that killed millions and left the world inhabited by ghosts.

Review: A scientific research facility implodes after their experiments backfires, ripping a whole through dimensions, causing an apocalyptic seismic event to occur: Millions of people around the epicenter are killed, and ghosts appear on earth, everywhere. The ghosts are not malevolent; they appear in spots all over the place and flicker on and off in a recurring loop, creating a new sense of strange normalcy for their remaining loved ones. Some ghosts are hundreds of years old, while others are fresh. More than a decade later, the world has adjusted, while the epicenter of the apocalypse is deemed off limits, with teeming ghostly activity. A teenager in high school named Veronica (Bella Thorne looking pretty goth) deals with seeing her dead dad every day, and copes with her new world like everyone else. She befriends a weird school outcast named Kirk (Richard Harmon), who has a special interest in monitoring ghosts, and he might be on to something: There is more ghostly activity than usual, and no one seems to realize it. Meanwhile, Veronica stumbles onto a new ghost in her house: an unsettling and possibly malevolent apparition that leads her to believe that a serial killer has been killing girls for more than a decade since the apocalypse, and they all share the same birthday … which is also her birthday. The chances of her being next on the (possibly dead) serial killer’s list is incredibly high, and so she and Kirk team up and venture into the off-limits area where clues might lie as to the killer’s identity. It’s a race for them, as Veronica’s birthday approaches, and the spirits around her seem to amplify their activity.

A clever and original post-apocalyptic horror-type thriller, I Still See You uses suspense and familiar serial killer tropes to tell an intriguing story set in a broken world. We see marauders roaming around the no-go zone, and other types of genre-specific elements in this, but it’s all done in an unusual way. It should appeal to several different demographics, and it held my interest the whole way through. If you liked the Pulse movies, you should like this too. From a book called “Break My Heart One Thousand Times” by Daniel Waters, and directed by Scott Speer.