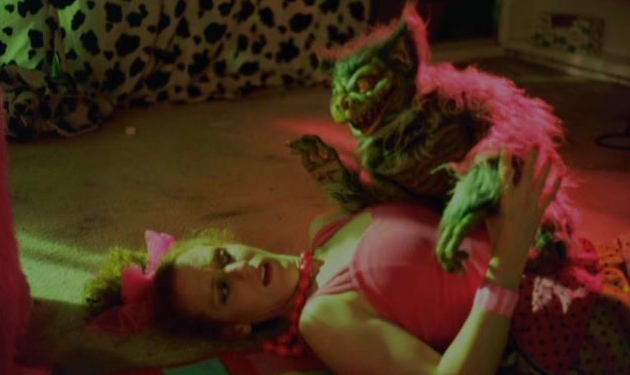 Filmed on the cheap in the style of Ghoulies, but aspiring to be Gremlins or Critters, Hobgoblins is sometimes the perfect comedy without quite intending to be, while it struggles to be an adequate creature feature.

Plot: A young security guard must track down diminutive aliens who kill people even as they make their fantasies come true.

Review: A canister from space crash-lands on Earth near an old film storage facility, and the old codger night watchman discovers that some Hobgoblin aliens are within the canister, ready to get out, wreak havoc, and turn the world upside down. So he does what he thinks is a solid: he acts fast before they escape, and he locks them up in the old film vault at the far end of the storage facility and keeps up the facade for decades. Over the years, he’s assigned a partner to help patrol the area, and invariably he loses his partner to the vicious little hobgoblins after they don’t heed his warning to stay away from the vault. He’s always had to rehire some new kid to take the last guy’s place, and when he finally hires eager newbie Kevin (Tom Bartlett), the status quo is about to change because while Kevin is just like the rest of the deceased guards before him (he’s curious and can’t help but be nosy), he survives his ordeal and accidentally unleashes the hobgoblins, the first to do so! Kevin and his group of college-aged pals (one is an overcompensating soldier on shore leave, another is a nerdy horndog whose vice is calling phone sex chat lines, and two are ditzy chicks) must stop the hobgoblins from invading the nearest town, but as the way these things progress, the pesky, toothy creatures make a mess of things – including the local nightclub, where most of the climax takes place – and Kevin is left holding the bill.

Filmed on the cheap in the style of Ghoulies, but aspiring to be Gremlins or Critters, Hobgoblins is sometimes the perfect comedy without quite intending to be, while it struggles to be an adequate creature feature. There are some truly laugh out loud hysterically funny moments (the broom stick fight on the front yard scene is hilarious), and if you’re going to watch this hoping for a scary monster movie, you may want to try something else for those kicks. The movie was reportedly shot for less than $20,000, and you can believe it, but it’s fun any way you look at it. The hobgoblin creatures are brought to you in the hand puppet fashion of the old Empire studios (a la Ghoulies or Troll) company, and while that evokes a sense of nostalgia for some, it may be off putting for others. The film at 88 minutes tries to pack as much in as possible, and it’s certainly a product of the mid 1980’s with kitschy fashion, music, and gags, but if you’re like me then that kind of thing will put a big grin on your face. The movie was directed by exploitation filmmaker Rick Sloane, who deserves a lot of credit for stretching the buck and coming up with something that is still being watched today.

Hobgoblins was given a royal treatment by specialty label Vinegar Syndrome, with a restored 2K transfer, and the film looks remarkable considering how cheap it was to produce. The picture has never looked better, and fans of low budget horror movies should get their money’s worth with this recent release, which also contains a bonus DVD. Some archival features, including a commentary track, behind the scenes features, and trailer are also included. There’s also a new feature entitled “Hobgoblins: The Making of a Disasterpiece.”