Starkly unpleasant characters and an ugly script make Harpoon a tough one to sit through, but a pat, ironic ending almost makes watching the movie worthwhile. Almost.

Rivalries, dark secrets, and sexual tension emerge when three best friends find themselves stranded on a yacht in the middle of the ocean desperate for survival.

Three close friends venture out on a day trip on a small yacht to celebrate a birthday. Jonah (Munro Chambers) recently lost his parents in a car crash, and he’s been in a funk ever since, while his best friend Richard (Christopher Gray) is an extremely wealthy upstart with a volatile temper. Richard’s girlfriend Sasha (Emily Tyra) always has to balance out Richard’s petulance with her good sense, but after giving her boyfriend a spear gun for his birthday, Richard’s mood explodes when he realizes that she and Jonah slept together recently, betraying him. Not holding back his rage, Richard is all but sure to murder Sasha if Jonah doesn’t step in, and by sheer luck they manage to overpower Richard and throw him overboard. When everyone’s temper cools down, Richard demands that all tools and potential weapons be thrown overboard if he – who has the only key to the boat – is to come back aboard, and so Sasha and Jonah toss everything that is useful overboard. When they welcome Richard back, they can’t get the boat started, leaving them all stranded in the middle of the ocean without food, water, or any fishing equipment. A week goes by, and all three friends are dying of thirst and hunger, and Jonah develops a serious infection from a wound on his hand, and then the three of them get desperate. With these three idiots left with nothing but desperation, their fates are in question.

Going into a movie about three people stuck on a boat, you should be well aware of what you’re likely to get. Starkly unpleasant characters and an ugly script make Harpoon a tough one to sit through, but a pat, ironic ending almost makes watching the movie worthwhile. Almost. If you’re willing to endure a grinding situation with three unappealing characters and watch them cut each other up to survive (not necessarily a spoiler), then Harpoon is for you. I had a difficult time with it, but it’s got a bit of a twist and it’s dark as hell, but that ending was pretty funny. Written and directed by Rob Grant.

The blu ray for Harpoon comes with a director commentary, a behind the scenes feature, deleted scenes, B-roll footage, and more. 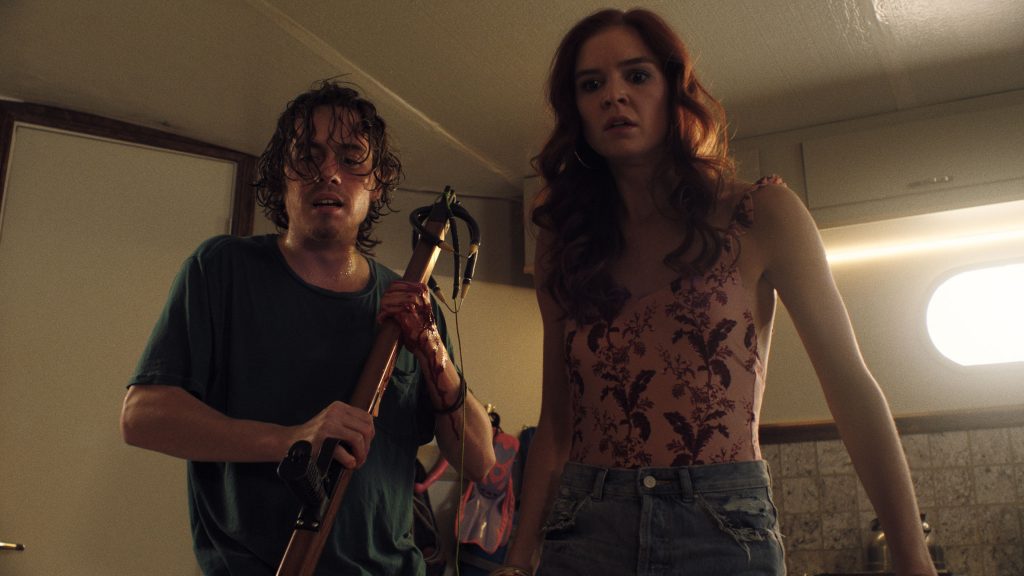