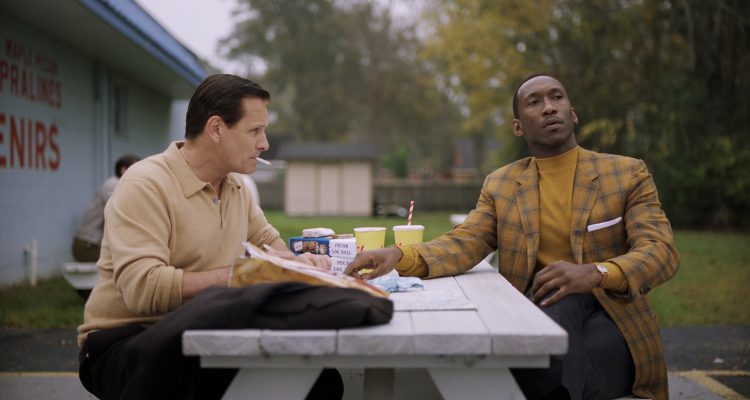 Green Book has excellent performances from the leads and their friendship is believable making this for an entertaining if overlong drama.

Plot: Sent in 1962, working man Tony Vallelonga (Viggo Mortensen) is offered the opportunity to chauffeur renown pianist Dr. Don Shirley (Mahershala Ali) on a concert tour, beginning in Pittsburgh and ending in the Deep South. Encountering the prejudices of the time, the two form an unlikely friendship, despite their differences in upbringing, education, and creed.

Review: I’m always leery of what some people term as “Oscar Bait” films. Generally, they lead to either an overly-sentimental story which loses its believability along the way, or it’s so mundane and frankly boring, that I find myself tuning out within twenty minutes.  While I was curious about the pairing of Mortensen and Ali, I was fearful that this movie would be another long exercise in the obvious (yes, racism is bad).

However, much to my surprise, there’s a lot of life in this film, mostly due to the individual performances of the two leads. There’s a believability about their relationship – there’s no big “aha” moment where the two characters finally understand each other – it’s a gradual progression throughout the film. By the end, you believe that these two characters existed in real life (which is good, because they did) and that it’s plausible that an upper-crust high-society musician like Don Shirley may have struck up an unlikely friendship with rough-around-the edges Tony Vallelonga. This is the greatest strength of the movie.

Mortensen, for his part, is barely recognizable.  Beefy and puffy, he plays the unsubtle Vallelonga like a bull in a china shop.  He sticks out on screen and is the most overtly charismatic of the two characters. Likewise, Ali is understated, quiet and brooding, with occasional glimpses of the fine man that lies beneath his proper veneer. If neither of these actors are at least nominated during awards season, then there is something definitely wrong here.

As for the story, to be honest, it’s nothing you haven’t seen before. As the two travel from the Midwest to the Deep South, the sense of unease intensifies as you understand that the main characters, especially Ali, have to watch their steps.  But like most stories with this subject matter, you have standoffs with rednecks, unreasonable conversations with people who should know better, racist cops, etc., etc. The only difference is, Ali’s character is just as ostracized by the black folks as the white; this adds a new wrinkle in an otherwise pat story.

Because the story is nothing new, the pacing suffers at times, especially at the end. The movie does try and keep things and locales moving at a somewhat brisk pace, but when it bogs down, you feel it. Luckily, it doesn’t happen too often, but due to the lack of action and otherwise excitement, it suffers every time the movie slows down.

The music itself is alright; I’m not much of a fan of music from this era.  The one key note is the fantastic piano work from Ali; I don’t know if he took lessons for the movie or if he already had the skills in his toolkit, but the man’s work in this movie was simply phenomenal.

There’s enough going on in Green Book for me to recommend seeing it; if you want great performances and believable relationships, this is the movie for you.