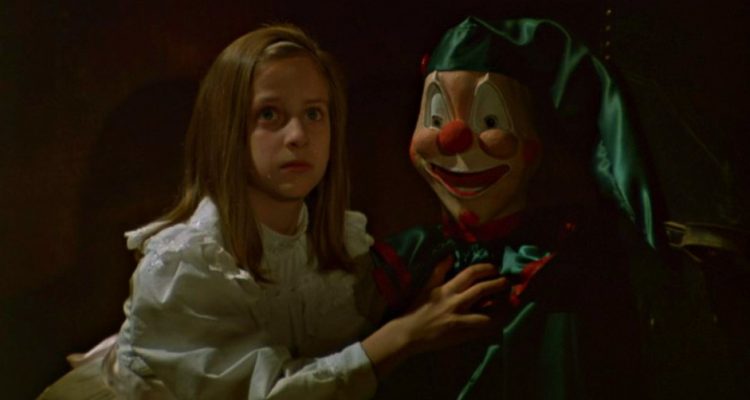 Ghosthouse is not an outstanding success; it at least has that creepy ass music and a killer clown doll but it’s really only to be enjoyed when very drunk or stoned.

Plot: A teenager (Lara Wendel) and her boyfriend (Greg Scott) discover strange radio messages are screams from the future.

Review: I picked this movie up on Blu-ray recently in a double pack with Witchery as I thought it sounded like good old cheesy fun; that it was as it is laughably bad and not even remotely scary… except for THAT music. That’s the creepiest shit I’ve ever heard; how do you come up with that? Even worse is that the music comes from a killer clown doll!

I still spend far too much time trying to decipher what the clown says in the nursery rhyme; it’s apparently “Burial” in reverse but that’s not what it sounds like to me. It still sounds like “Are you up? Are you there? Are you Dead? Are you there?” which is frankly even more terrifying.

Admittedly there are a few cool gore moments but the terrible acting lets any chance of tension dissipate rapidly. It’s also rather boring with a story and characters that fail to engage so you never really care what happens to any of them.

Some of the set design on the house itself is nearly creepy but the movie ultimately ends up being more of comedy; what were they thinking with the old guy who goes around killing everyone? Was he meant to be handicapped or something? He was easily one of the worst actors in the movie but he was up against some pretty stiff competition.

At one point Lara Wendel’s character says to her boyfriend that she’s had enough of this craziness and storms out, then she’s back with him in the next scene which made no sense in terms of continuity.

Overall, Ghosthouse is not an outstanding success; it at least has that creepy ass music and a killer clown doll but it’s really only to be enjoyed when very drunk or stoned.