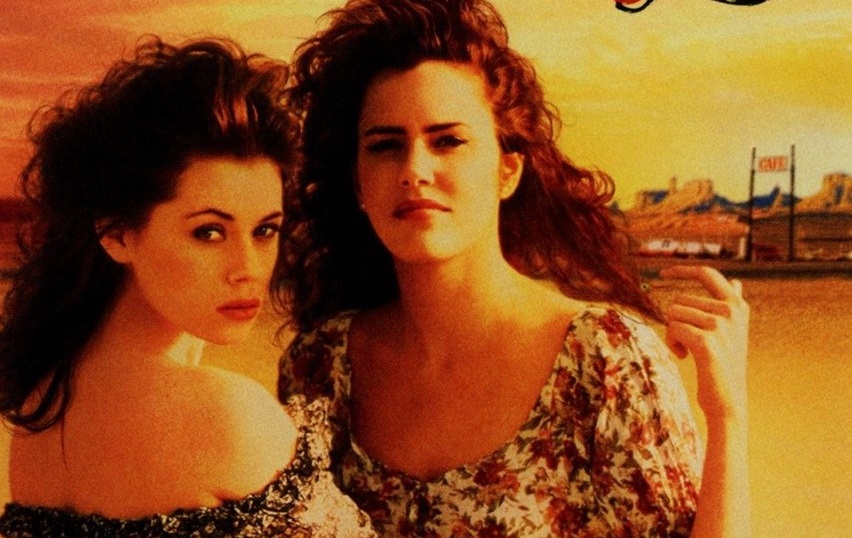 Plot: In the desert of New Mexico, a single mother raises her two teenage daughters, Shade and Trudi, whose deepest desire is to leave the dead calm town. Shade is the type to escape in her extravagant fantasies while Trudi is so rebellious it could drive her away.

Review: Two sisters – the older, sexually promiscuous Trudi (Ione Skye) and the younger, less unsure of herself Shade (Fairuza Balk) – live in a trailer park with their single mother Nora (Brooke Adams), who makes ends meet by working at a local truck stop in the desert wasteland of New Mexico. Trudi is on the verge of dropping out of school and fleeing the coup after several spectacularly failed relationships with local boys when she unexpectedly falls into an unlikely relationship with an older Englishman who is passing through town looking for unique rock specimens for his geological research. Shade spends most of her days at the Spanish-language movie theater, watching old Mexican movies and dreaming of other places, while also trying to get her mother to date the right men. When Trudi gets pregnant, she leaves for Texas and doesn’t look back, while Shade finds their father (played by James Brolin) and meets him for the first time, asking for help and advice. Also, Shade unexpectedly kindles a sweet relationship with a local Hispanic kid, who has a deaf mother. The snapshot of these lives somehow resonates as authentic.

A true indie feature with a real voice and a spirit of legitimacy, Gas, Food Lodging arrived right at the crux of the American Indie Film Movement that changed the landscape of American Independent Film. Writer / director Allison Anders fully emerges as a unique storyteller, adapting a novel by Richard Peck and making it fully her own. The performances in the film are pretty great, particularly by Brolin who only has a couple of short, but memorable scenes. This is what American Independent Film used to feel like. This is almost where it all started to feel like a movement.

Arrow Academy recently released a high definition Blu-ray of this title, and it comes with a delightful on camera interview with Anders entitled “The Road to Laramie: A Look Back at Gas, Food Lodging,” plus another documentary from 1995, and a newly commissioned piece of artwork for the sleeve.