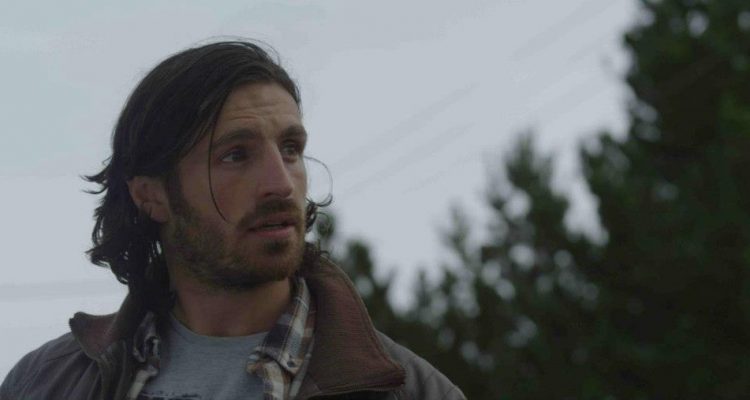 Leopard fixes on two separated brothers Tom and Jack, who are cold-shouldered by the Irish village they live in. Jack returns after 5 years with the sudden and unexplained death of their father and the brothers are immediately at odds with one another. Jack’s presence pushing Tom’s loner mentality into a dangerous psychosis and opening an old wound with the locals as to why he originally left. Things take a surreal turn when they find a girl apparently left for dead in the moors and Tom becomes wildly obsessed with looking after her. What follows is beautiful, tragic and bizarre, as the brothers search for a resolution to their past and their relationship to one another in this mesmerizing tale of love, violence and redemption.

We speak to the film’s writer, director and co-star Eoin Macken (TV’s The Night Shift) about the film, which is currently doing the VOD rounds. He also has a fantastic first name I might add.

We know you best as an actor Eoin but, from the sounds of it, you’ve got your finger in a few pies.  But is acting still the first love?

I don’t think that I need to define that . I love acting, and it’s what I love doing, but I consider myself a storyteller. I want to be involved in creating stories, characters and ideas, and for me acting, writing, directing or photography, is all a part of that, and each skill I am lucky enough to try and learn feeds into the other.

And how long have you been acting for now, sir?

I’ve been acting since my third year of college, when I was 21, and began some training in New York with Nin Murrano. Then I did my first films during my final year of college, with the indie Rise of the Bricks, and the big Irish film Studs, with Brendan and Domhnall Gleason.

When did you first move to L.A?

I have been coming back and forth since I was 22 and had finished college. I came for 3-6months at a time, and sometimes things worked out, but mainly it was a graft. Then I moved here fully after I began doing The Nightshift.

How much has doing a hit primetime series changed your life and career?

It’s helped in many ways, it’s given me more confidence as an actor and opened up some doors for me as a film maker.

Did its success pave the way for you to make your own films, like Leopard?

I had already made Leopard before I was a part of the Nightshift. I actually shot my screentest for Night Shift on the set of Leopard because we were filming and I couldn’t leave my own film set to get to America for the screentest.

Who or what were you influences on the film?

I am a big fan of Kieslowski, and Wim Wenders, and films like Paris, Texas, Three Colours Blue, and the Steinbeck books ‘East of Eden’ and ‘Grapes of Wrath’. These films, books and film makers influenced some of the style, the atmosphere, the characters and the pacing.

It was shot in Ireland. How much do you believe Ireland is a character in the story? Would the film have worked as well if it was set, say, in Los Angeles?

It would have worked just as well if it was set anywhere, however the tone would have been different, there might have been more grit, and a different form of isolation. But essentially each character would exist in a different guise in a different city. The Irish landscape and the heart of the countryside brings its own life to the film though, and that does feed into the plot.

And you’d worked with most of the cast before,  I believe?

Apart from Helen Pearson, I had worked with everybody before. Knowing people helps you trust them and for an indie movie like this it was imperative that we understood and liked each other. I also wanted to work with each of these actors because I respect their work and wanted to work with them again.

How has the feedback been?

We’ve been really happy so far, the response when people have seen it has been excellent, and really makes it worthwhile. It’s been a hard road getting it released but that’s how it is with indie film making.

What do you hope audiences walking away from Leopard with?

It depends. Some people have focused on different elements of it, because a film always objectively touches people differently. But as long as it gets people thinking, and they feel for the characters in the story, and are involved in the journey, and are affected by the story, then we have achieved something.