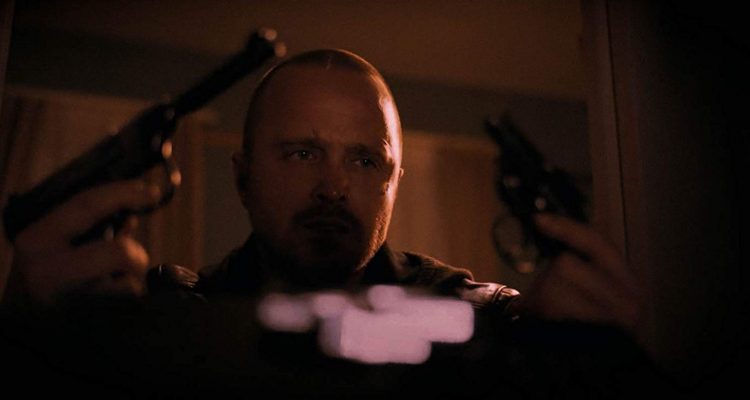 You can make the case that this is another movie that really didn’t need to be made; that being said, Aaron Paul is engaging as always, the plot was suspenseful, and it was great to see familiar faces back together again.

Plot: After escaping the Brotherhood, Jesse Pinkman (Aaron Paul) tries to start his life over again, but his old life keeps getting in the way.

Review: I’ll be honest with you – I was okay with how Breaking Bad ended.  Yes, it could have been better, I will give anyone that.  However, I thought that it pretty much wrapped everything up to a somewhat satisfying conclusion.  Jesse fleeing the compound at the end, it never really bugged me what happened after that. Apparently, for Vince Gilligan, there was more to Jesse’s story to be told, and you know what? I’m fine with that as well.

So to be clear, even if you’re a Breaking Bad fan, you don’t necessarily have to see this movie. You can live your life with your imagination of what Jesse did after the fateful night he finally escaped the bloodbath in the compound. However, if you really wanted to know what became of Jesse, then this movie has all the answers for you.

The acting, unsurprisingly, is terrific.  Paul’s Jesse Pinkman feels like a new character – the torturous, demeaning existence he was living at the end of Breaking Bad has made him a new character, far from the brash young small-time criminal he was at the beginning of the series. Jesse Pinkman has been through Hell, and you can see it every step of the way.  If you have been ignoring the internet and don’t know who else shows up as well, I won’t spoil it for you, but let me just say, it’s very satisfying.

As is the suspense in this film.  They do throw some character vignettes in, and those could threaten to disrupt the flow of the movie, but luckily, there’s usually a point to everything, and they don’t take forever. Even when scenes seem disjointed and you think you’re taking a ride through Pinkman’s broken mind, you realize that everything has a purpose.  The scenes in Todd’s apartment with the cops and the sequence in the junkyard closer to the end of the film are especially tense and really paced well.

Surprisingly, the cinematography was also beautiful. There are some nice longshots of New Mexico, especially the mountain areas that show how stunning the landscape in the desert can be. This is nicely juxtaposed with the seedy, run-down parts of  Albuquerque, which fans of the show will recognize.

In general, it’s hard to shake the feeling that this movie is made-for-television – it didn’t premiere theatrically, and it was linked to a popular television show.  If people want to look at it as such – so be it.  There’s no harm in that, and really the production values are top-notch, as are the performances.  For that reason alone, you should check out this flick, if only to see Aaron Paul killing it again as Jesse Pinkman.