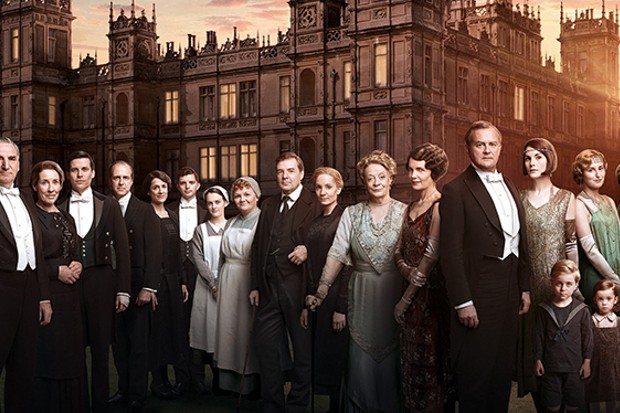 Downton Abbey brings everything we loved from the series into wonderous life on the big screen and there is enough to entice new viewers as well as bring in fans of the show.

Plot: Excitement is high at Downton Abbey when the Crawley Family learns that King George V and Queen Mary are coming to visit.  But trouble soon arises when Mrs. Patmore, Daisy and the rest of the servants learn that the King and Queen travel with their own chefs and attendants – setting the stage for an impromptu scheme and other shenanigans.

Review: Right from the ‘Get Go’ I will admit that I never missed any episodes of the Television series.  So when I heard that a movie was being made I knew I would be first in line!

They had me from the start of the dearly familiar theme tune (composed by Scottish Composer John Lunn).  It jumped straight into the story, set in 1927, and we were immediately immersed in the excitement of the King and Queen’s impending visit to Downton Abbey.  Lists made, food ordered, silverware and crystal all polished and sparkling… what could go wrong?  Well, quite a lot actually!

Planning was brought to a shuddering halt when it became clear that the faithful retainers of Lord Grantham (Hugh Bonneville) would not be required on the day.  Mrs. Patmore’s (Lesley Nicol) favourite special dishes were not to be on ‘The Menu’.  Footmen and other attendants were to be put aside in favour of the Royals’ own servants.

In order to avoid creating any spoilers in the drama I will not elaborate on the plot line. Suffice it to say dastardly acts were committed to thwart the Royal employees with entertaining consequences.

Julian Fellowes’ script is as sharp and perceptive as ever – spiked with humour.  As devotees of Downton would expect Maggie Smith as the Dowager Countess has the best lines!

It is a delight to have so many of the original cast together again and storylines moved on without spoiling the movie for ‘Downton’ Newbies.  It dealt on a superficial level with the 1926 General Strike with a throwaway line or two…’How did you manage My Dear – was it ghastly?’ type of thing.  Socialism had taken hold and things were uneasy as it crept closer to the great and the good.  Lady Mary was still agonizing over the role of the Grand House in post WW1 Britain and did it still have a function to fulfil in the community. The role of women was constantly changing post War and they were no longer prepared to be consigned to needlepoint by the fire after having been so active whilst the male population was at the Front. The movie also brought in a plot line examining the social changes in same sex relationships which were, of course, still illegal at that time.

The costumes were stunning with Anna Robbins excelling once more with the Art Deco style of the time. My particular favourite was Lady Mary’s (Michelle Dockery) black and silver ball gown!

The set designers had Highclere Castle playing her part to the full as Downton Abbey.  Nothing was spared in the colourful Royal parade with King George V (Simon Jones) and Queen Mary (Geraldine James).

The movie was generally lighthearted but not without its drama. It was a comfortable watch and I thoroughly enjoyed switching off for a couple of hours!