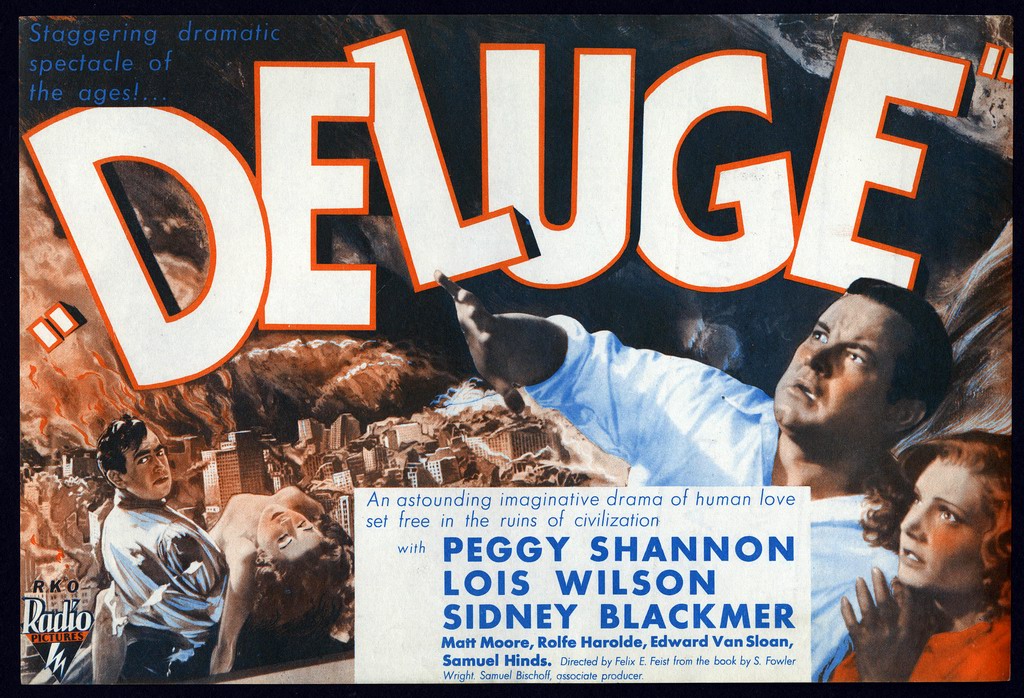 If you’ve never seen Deluge then you should track it down; after all this time it still manages to shock with some spectacular visuals and a nice Blu-ray from Kino.

Plot: A massive earthquake strikes the United States, which destroys the West Coast and unleashes a massive flood that threatens to destroy the East Coast as well.

Review: This astounding R.K.O. film is something to behold. It presents the world on the brink of an all-encompassing disaster from which there will be no recovery. It begins by scrolling scripture on the screen stating that God promised Noah that there would never be another worldwide flood and it goes on to say that what we are about to watch is a work of fiction. News agencies around the world are in a panic as earthquakes and storms occur everywhere and with such force as to activate tidal waves and fissures big enough to swallow New York City whole. The destructive wrath heaped upon the world is vividly captured on film here, and I was absolutely convinced, as I was equally convinced with the scenes in the Roland Emmerich film, 2012, that what I was watching looked real and credible. We see New York City get decimated, with buildings collapsing, people in subways getting killed, with even the Statue of Liberty getting inundated with floodwaters. Seriously, the destruction scenes in this movie rock. After the entire world is flooded, we meet a pretty woman named Clair (Peggy Shannon) who is washed ashore on a beach. A thug picks her up and takes her to his shed, where he plans to make her his sex slave. No joke. When she wakes up and figures out what’s going on, she runs away and escapes. She then meets another man, also someone who washed ashore after the floods, but he’s nicer and more respectful towards her. This guy, named Martin (Sidney Blackmer), had a wife and child, but he presumes them and everyone else he once knew to be dead. He befriends Clair and they try to make it as a couple for awhile.

Meanwhile, the thug Clair escaped from is still trying to track her down, and he joins forces with a band of marauders, who rape and kill women. When the marauders track Martin and Clair down, they almost have them, but another group of survivors from a nearby settlement save the day and run the killers off. Martin and Clair (who’ve already consummated their relationship) are invited to join the settlement, and when they get there, Martin is shocked to find that his wife and child are living there. Clair, dejected and feeling left out, is forced to be “the other woman.” After some time in the settlement, Martin’s wife confronts Clair, and Clair, being a strong-willed woman, refuses to step down as Martin’s woman. Just when Martin is declared the leader of the settlement, Clair strips naked and swims away into the ocean, alone.

I was more than surprised to find that this movie, made pre-code, was so shocking in its up-front and unflinching treatment of the fate of the world and its innocent inhabitants. The fate of Martin and Clair’s love is doomed, which seems to be the point that this movie is making. Even love is destroyed when nature gets her way, to some extent. Directed by Felix E. Fiest.

Kino Lorber and Lobster films have teamed up to bring the first-ever release of Deluge to home video. They restored it from the original 35mm elements and gave this motion picture the much-needed attention cinephiles deserve. There’s an audio commentary by film historian Richard Harland Smith, trailers, and a bonus feature film, the 1934 picture Back Page, starring Peggy Shannon, who is in Deluge. This is essential post-apocalyptic cinema. Purchase one ASAP.