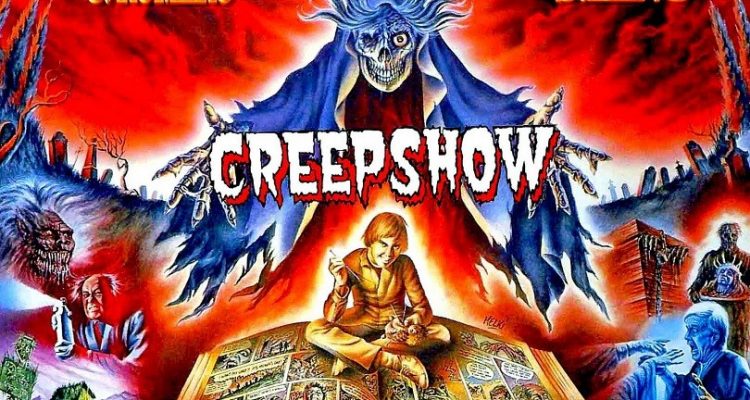 Creepshow is entertaining but it’s never really scary; it’s a fun watch for this time of year for sure but I don’t think I’d be in a rush to see it again.

Plot: A compendium of five short but terrifying tales contained within a single full-length feature, this film conjures scares from traditional bogeymen and portents of doom. In one story, a monster escapes from its holding cell. Another focuses on a husband (Leslie Nielsen) with a creative way of getting back at his cheating wife. Other stories concern a rural man (Stephen King) and a visitor from outer space, and a homeowner (E.G. Marshall) with huge bug problems and a boozing corpse.

Review: Everyone loves a good horror anthology and Creepshow is one of the best known of the genre; I just watched it for the first time recently and although it was entertaining I wasn’t in love with it.

It isn’t particularly scary but it’s incredibly silly fun with multiple scenes which will have you saying “ewww”… which I certainly did. Rather than jumpy scares it focuses more on what you fear psychologically like drowning, being buried alive or indeed eaten by a monster that lives in a crate… which is something that terrifies me every day.

The Crate is actually my favourite story as it has a few creepy moments, a cool monster and Hal Holbrook who I’ve always been a big fan of. The stories are actually all pretty messed up and there are a few moments which are quite disturbing; not in a “Saw” fashion but just in “WTF” moments.

The biggest revelation was Leslie Nielsen playing a rather psychotic man who tries to drown his own daughter and her man (Ted Danson) which was bizarre, especially how it ends.

Keep your eyes open for a young Ed Harris who is crushed by a headstone in a graveyard when a deceased relative comes back from the dead for some Father’s Day cake. Yeah, it’s mostly total bollocks but like I said it is always fun.

My least favourite story was the guy getting infected by a meteor and becoming some form of plant; sure, it felt like the kind of nonsense you’d see in a 50’s sci-fi yarn but it really didn’t work for me at all.

Overall, Creepshow is entertaining but it’s never really scary; it’s a fun watch for this time of year for sure but I don’t think I’d be in a rush to see it again.