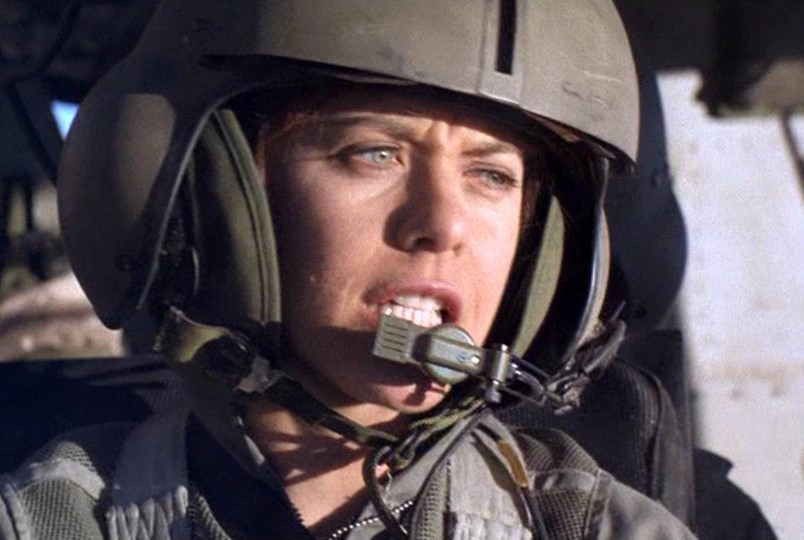 Courage Under Fire is a solid dramatic thriller, with great performances and superb war battle sequences.

Review: I remember when this movie came out, I was intrigued by the cast. Denzel is Denzel, the man is just flat-out watchable in everything. I remember thinking it weird that Meg Ryan, who to that point I only associated as being in rom-coms, was going to be in this hardcore war movie with these macho male actors, like Lou Diamond Phillps and some skinny dude named Matt Damon. The idea of the film intrigued me, but I didn’t get around to sitting down and watching the movie 24 years later.

Courage Under Fire is an expertly made movie. Edward Zwick, who has made a host of decent films, including The Siege and Blood Diamond, knows how to shoot a movie. That’s incredibly important for this movie, as there are several war scenes where you have to tell what is going on. The war scenes are excellently shot, and a rarity in these types of movies, where everyone wears helmets, you can tell who is who. It helps that there’s just a small band of soldiers, but still, I’ve seen other directors do less with more.

The cast lives up to their pedigree. Denzel Washington is excellent as a man haunted by his own mistakes and thus trying to make sure he doesn’t do another in his investigation. Meg Ryan is stellar as Walden, whose character keeps changing depending on who is narrating the story. This was the period of time where I wasn’t a big fan of Matt Damon, but I recognize now what skill he brought to the role of the guilt-ridden medic, Ilario. The real stand out in the picture, though, is Lou Diamond Phillips, who plays the conflicted Monfriez. The role could have just been a straight antagonist part, but Phillips plays it in such a way that you can see the regret oozing just below the hardened surface.

The story itself is pretty good and keeps you guessing all the way to the end. While you will be able to guess the outcome and there are no surprises about whose story is correct and whose story is nonsense, you’re still interested to see how the true series of events unfolded. While the ending is a bit of a foregone conclusion, the journey is worthwhile, and the fate of at least one of the characters is not easy to forecast.

So, if investigation stories that take place in the armed forces are your thing, I recommend checking this movie out. It’s solid from top to bottom, with a great cast and just enough going on to keep you interested throughout.