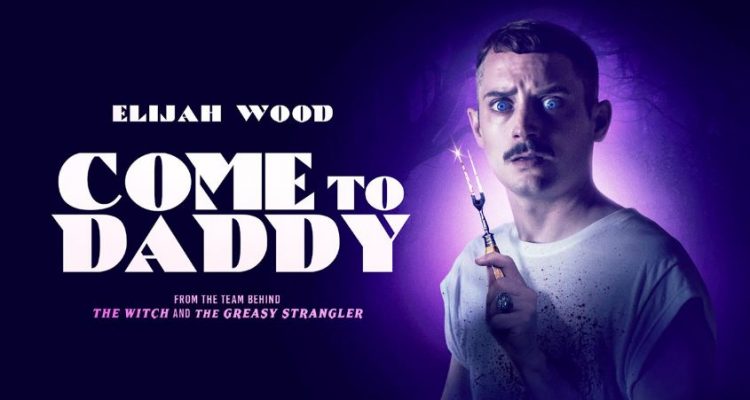 COME TO DADDY is a strange film that almost defies classification. Adventurous viewers though will find plenty to enjoy here: solid direction, strong performances, and an unconventional story that packs a surprisingly emotional punch.

Plot: A man in his thirties travels to a remote cabin to reconnect with his estranged father.

Review: How far would you go to reconnect with an absentee parent? Norval Greenwood, played by Elijah Wood (THE LORD OF THE RINGS trilogy), is thinking about that very thing as we find him traipsing through the Northern California woods looking for a remote cabin, owned by his father who disappeared from his life thirty years ago. This is the opening scene of COME TO DADDY, the strange feature-length directorial debut from noted genre film producer Ant Timpson (TURBO KID).

You see, Norval has been invited to spend a week with his estranged father at his cabin on the California coast. When he gets to the cabin though, the man there to greet him, played by Stephen McHattie (PONTYPOOL), doesn’t seem to actually want him there. In the following days, he mocks Norval incessantly and tries to goad him into needless confrontations. There is something off about the entire situation but Norval desperately wants to get to know his father and before long things get out of hand in a way he never could have anticipated.

COME TO DADDY is a film where the less you know about it going in the more you are likely to enjoy it. The script by Toby Harvard (co-writer of THE GREASY STRANGLER) builds a wonderful sense of ominous dread in its first third before the film shifts into something more strange and visceral that leaves Wood’s Norval battered and struggling to survive. It’s a testament to Harvard’s script that the large change in tone feels organic and not jarring. It also never loses sight of the emotional core of a child wanting to be closer to an estranged parent. So, when it goes dark or, more often, absurd- the audience is still invested in Norval’s journey.

Of course, the whole thing would fall apart if you didn’t care about Norval and in the hands of a lesser actor, the character could easily be insufferable. He’s a hipster with a terrible haircut, a questionable mustache, and an expensive trendy cellphone but Elijah Wood gives the character a real vulnerable, wounded quality that provides depth beneath his outlandish appearance. Wood’s vulnerability is countered by Stephen McHattie’s gruff and aggressive performance. Where Norval is soft, McHattie is all edges; grizzled and sinewy. Even when he tries to show affection it feels like he is having to force it out over the obvious contempt he has for Norval. It’s an unsettling performance and the most memorable one in COME TO DADDY. Considering the film has strong supporting turns from Micheal Smiley (FREE FIRE), Martin Donovan (ANT-MAN), and Madeleine Sami (SLOW WEST) that is high praise of McHattie’s work.

Ant Timpson, as a first-time feature director, shows himself to be as adept behind the camera as his cries are in front of it. COME TO DADDY is full of interesting shot placements and scene staging. The cinematography of Daniel Katz (MY FRIEND DAHMER) beautifully captures everything from the coastal beaches of the first half of the film to the neon-lit seedier locations of it’s wilder second half. My only complaint here is that, at times, you lose a sense of where characters are in relation to one another which does hurt some of the tension throughout the film.

Another failing is, as weird as the film gets as it progresses it still feels at times like it is holding back. When it should be ratcheting up near the end, it actually starts to lose some momentum. This would bother me more if the film didn’t end on a surprisingly poignant note. Despite all the dread, violence, and general oddness of COME TO DADDY; the end of the film brings us back to that idea of a child that just wants to know where they came from and that emotional underpinning makes all the strangeness of the journey more than worthwhile.